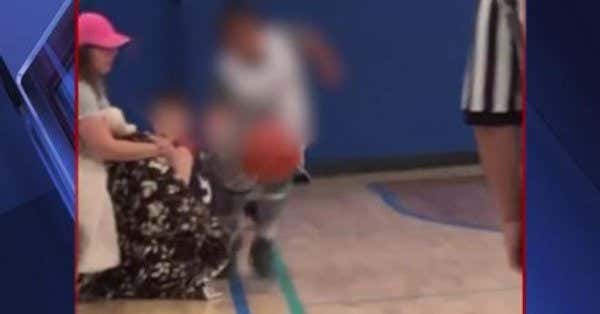 Source – Shocking video captures the moment a parent sitting courtside at a youth basketball tournament in Rocklin appears to stick out her leg to trip a player from the competing team.

“This specific team is our 10-year-old and under team,” said Eugene Solano, the director of the Vallejo team.

Solano told FOX40 he was first notified by his players during the game of unsportsmanlike conduct from a parent sitting on the bench.

“One of the kids during one of the timeouts had said, ‘Hey coach, there’s a parent on the sideline, it’s a woman you know, I think she’s wearing a pink hat,’ pretty specific. ‘And she’s telling their kids to elbow us in the face,'” he recalled.

Solano said coaches and parents often record video highlights to show back to their kids. The same footage also showed the woman in the pink hat appearing to stick out her foot while a 9-year-old Vallejo player dribbles the ball past her.

Cry me a river, Eugene Solano. Grow up, Vallejo basketball kids. The last I looked, 10-year-and-under youth basketball was supposed to be a competitive sport. With a scoreboard and a winner and a loser. If a parent’s not willing to stick his or her foot on the court every once in a while to gain an advantage, why bother even keeping score? If they’re not telling their 9-year-old to throw the People’s Elbow at another 9-year-old’s face, then what are we here for? Why get in the car?

At their best, youth sports are about teaching kids life lessons. At the very least, Pink Hat Mom taught that kid he better keep his head on swivel when he faces this lady’s son’s team. At most, she taught her son how you get ahead in sports. A lesson that, if he plays his cards right and keeps learning under her Sensei Kreese-like guidance, could get him all the way to Duke:

So complain all you want, Cornerstone. When Pink Hat Mom’s son is a star, you’ll be wishing your mom was as dedicated as she is.

10 and under basketball+ 7 Tags