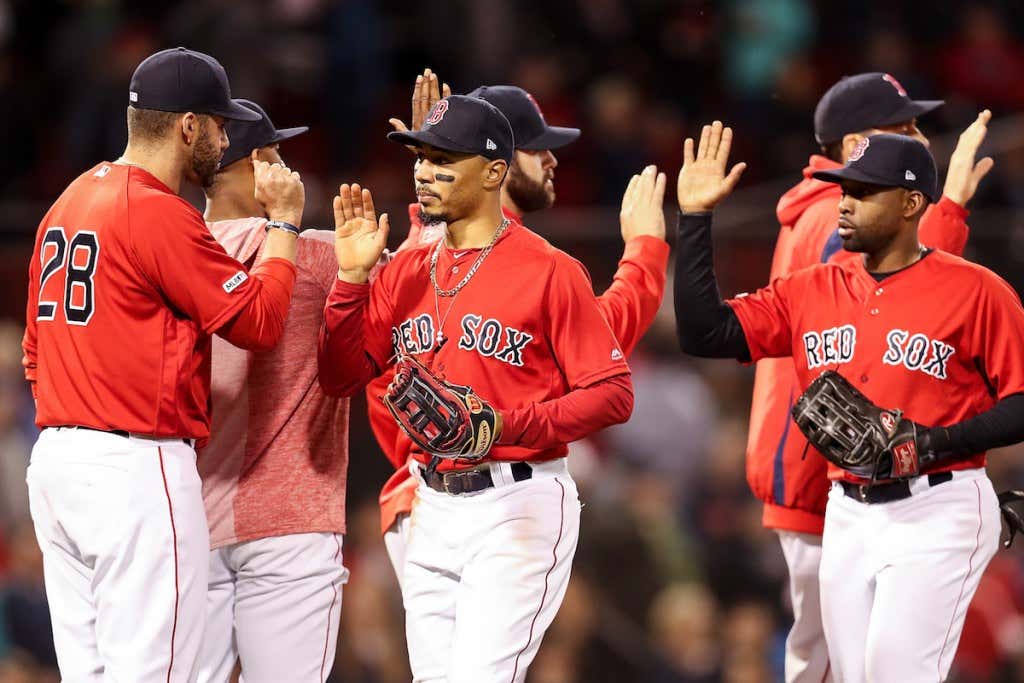 For the first time in 2019, I woke up to threats of physical violence from Yankee fans. The Red Sox are back.

It took them a little while considering that it’s the second week of May, but that’s not really important now. What’s important is that with their blowout victory over the Mariners on Friday night, the Boston Red Sox have finally attained a winning record. In a season that started out 6-13 for Boston following back-to-back losses at Yankee Stadium, the Red Sox, from there, went 13-6 to wind up at .500 coming into their 8-game homestand. And they didn’t just knock on the door of a winning record — they kicked the fucking door down.

Fourteen runs on 15 hits, three homers, five doubles, one massacre. This game pretended to be a competition for two innings, and then the floodgates opened. Four runs in the third, a run in the fourth, two more in the fifth, a run in the sixth, a pair of runs in the seventh, and another four-spot in the eighth. The Red Sox didn’t get a chance to bat in the ninth because they were, you know, up by thirteen runs.

Offensive explosions like these have been happening fairly often as of late, and it’s pretty hard to stand out when everybody is hammering the Christ out of the ball, but Rafael Devers still found a way to do that. The 14-year-old went 3-for-5 with a homer and a double, while driving in four runs. The eighth grader has been hot for a little while now. Dating back to April 25 against the Tigers, Devers is hitting .386 with a 1.025 OPS in 63 plate appearances with 6 doubles, a couple homers and 13 RBI in 14 games. School hasn’t even hit summer break yet and this is what he’s been doing. It’s very impressive.

Eduardo Rodriguez has pitched in a couple of really tight games his last two times out, getting 29 runs of support. Seriously. His last two starts, the Red Sox won by scores of 15-2 and 14-1. Love to see that. He hasn’t been lucking into victories, either, if that’s what you’re thinking. On Friday night, the lefty went seven shutout innings with only one walk and five strikeouts. Don’t look now, but after compiling a 12.38 ERA over his first two starts, Rodriguez has pitched his way to a 2.78 ERA with 39 strikeouts in 35.2 innings over his last six starts. He’s also only allowed one run in his last 13 innings. Don’t let Eddie Aces get hot.

In the middle game, you’ve got a battle of former Cy Young award winners when Rick Porcello squares off against King Felix. Porcello is another guy who started off like dog piss with a 13.50 ERA in his first two starts, but over his last five, he’s got a 3.03 ERA with 27 strikeouts in 29.2 innings. We are turning corners all over the place, folks. Felix obviously hasn’t been a Cy Young caliber pitcher in quite some time, but you won’t hear any disrespect from me. The man’s a legend. A legend who has a 5.63 ERA over his last four starts with six homers allowed.