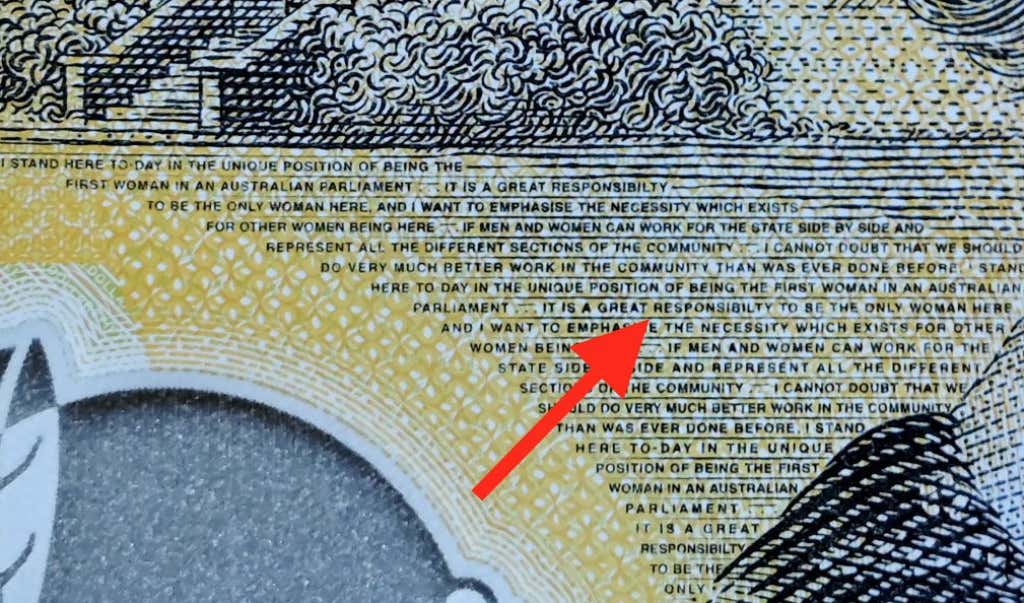 The Reserve Bank was left scrambling for answers on Thursday morning after radio station Triple M posted a photo on Twitter sent in by an eagle-eyed listener.

The photo shows the RBA’s new $50 note under a magnifying glass and reveals an embarrassing typo in the reverse text, which features excerpts from Edith Cowan’s maiden speech to Western Australian Parliament. News.com.au has confirmed the typo is indeed real.

An RBA spokesman said, “The Reserve Bank of Australia is aware of it and the spelling will be corrected at the next print run.” He confirmed there had been “around 400 million” $50 banknotes printed with the error.

“The next print run will commence around the middle of the year,” he said. “It is the first print run of the $50 banknote we have done since the error was detected. These banknotes will be ready to be released into circulation around the end of the year.”

Annnnnnnnnnnd somebody is fired. You had one responsibilty and that was to proofread this $50 bill to make sure everything was spelled right. Literally your only responsibilty probably. In fact I’d imagine this was several peoples’ responsibiltites and they just said, “yup it’s good to go, let’s send out 400 million.” I honestly don’t blame them. I’d do the same thing. If you think I’m ever reading the fine print on something you’re crazy. When I signed my Barstool contract it could have very well said, “by signing this you hereby surrender all of your money, you must live on the streets for content, you will never see your family ever again and in five years we will shoot you in the face with a cross bow killing you.” Boom. Done deal. Welcome to Barstool. Luckily it appears there was no funny business because nothing bad has come up….yet.

Just think, some asshole with a fucking magnifying glass decided he would read through every goddamn word in the tiniest font ever to see if he could say “gotcha!” Well that guy (probably a 50 year divorcee with nothing better to do) found this mistake. Congratulations pal. Now what? You caused everyone a huge headache, probably got someone or a few people canned, and you get nothing from it. You’re not getting a monetary reward from this. You get a pat on the back and that’s it.

If you’re the guy who got fired for not going through thoroughly and proofreading every word with a magnifying glass then you have every right to hunt down this person who found the mistake and fight him. I almost would have respected it more if Australia came out and said, “yeah we spelled it wrong, but we’re not changing shit. Too late.”

P.S. This would be a genius tactic by Australia to secretly misspell ‘responsibility’ on purpose to prevent counterfeiting. No thief would ever think that was done on purpose. This “eagle-eyed listener” might have ruined their secret plan.