Kyle Hendricks got his tits blown off his chest last night which obviously sucks. People have been freaking out saying that he's not good and that we're all doomed.

Well truth is he's just not that good in April. Especially coming off rest when he skipped his start. It's actually alarming how bad Hendricks is to start the year, and then even more shocking how good he becomes once he settles in. I blogged about it extensively before and figured it's worth running back as a reminder.

We're talking about one of the greatest pitchers in MLB over the last 6 seasons. The numbers are there along with team and individual success. He's become a bonafide top-end rotation for 162 and I think it's important we all get on the same page. Everything here still applies. He will be just as unhittable in the 2nd half as he is in every 2nd half.

Kyle Hendricks was back to his old shit over the weekend throwing an 81-pitch complete game shutout that had the baseball world freaking out. The quickest and easiest comparison that came to mind was Greg Maddux, inarguably one of the best pitchers ever.

Someone even speculated that they're related

While others believe they're actually the same person

Personally I've met Mr. Hendricks and can attest that he's unfortunately not Greg Maddux. Although you have to imagine Greg Maddux would make a pretty cool dad, no?

Anyways and regardless of Greg Maddux's fatherly abilities, we can all agree Kyle Hendricks has turned it up a gear after the slow start to the year and that's what we're here to talk about.

It seems to be a recurring theme year after year with Hendricks. Anyone who listens to Red Line knows I spend a lot of time talking about Hendricks and rightfully so. He's always the swingman when the Cubs go on big runs.

On thing in particular I like to talk about with Hendricks is his sinker which serves as his primary fastball. He throws it about 45% of the time and it averages around 87mph which means your high school team probably had at least 1 or 2 kids that throws harder than Kyle Hendricks.

But as the name indicates, Hendrick's fastball sinks making it very difficult to square up as evidenced by the YouTube video I opened up with. Listen to the sounds of those Cardinals' hitters again.

That's dead wood and Hendricks makes it by throwing pitches with late break in the strike zone that look like meatballs but feel like bowling balls. That's exactly what an effective sinker does - it generates weak contact resulting in an out.

Compare that to having a filthy slider no one can hit. That's great, but I'll take one sinker for one out vs. four sliders for one strikeout any day of the week and twice on Sunday. The Cubs hitters would agree. Do you know how great it must be to play the field behind an 81-pitch complete game? That's the least boring game of defense these guys will play in a long time.

I bring up Hendricks sinker because it always always ALWAYS takes time to get going in the year. Always. I talk about that non stop on Red Line Radio because everyone wants to freak out after 3 starts when Kyle Hendricks gets his doors blown off.

In reality - that's part of the process as a sinker baller. You need a couple starts to get the feel down and let your shoulder get loose and all that shit. Reason being is it takes a lot of shoulder, wrist flexibility to throw the pitch and everyone knows it takes a couple starts and the grind of the season to get that going.

Once it sets in though, it's off to the races as we've seen over his entire career which brings me to the INFOGRAPHIC.

How good is Kyle Hendricks once he settles in?

Once Kyle Hendricks settles in, the rest of the league is kinda fucked. 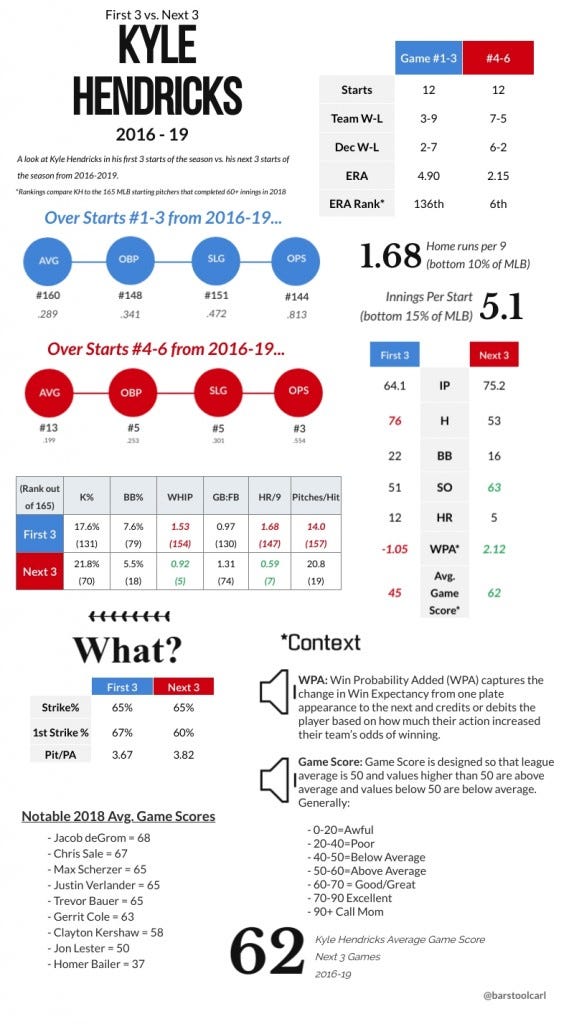