Happy anniversary, Jeff! One of the more memorable scenes of our era basketball. I mean it’s hard to say Jeff Van Gundy and not picture this: 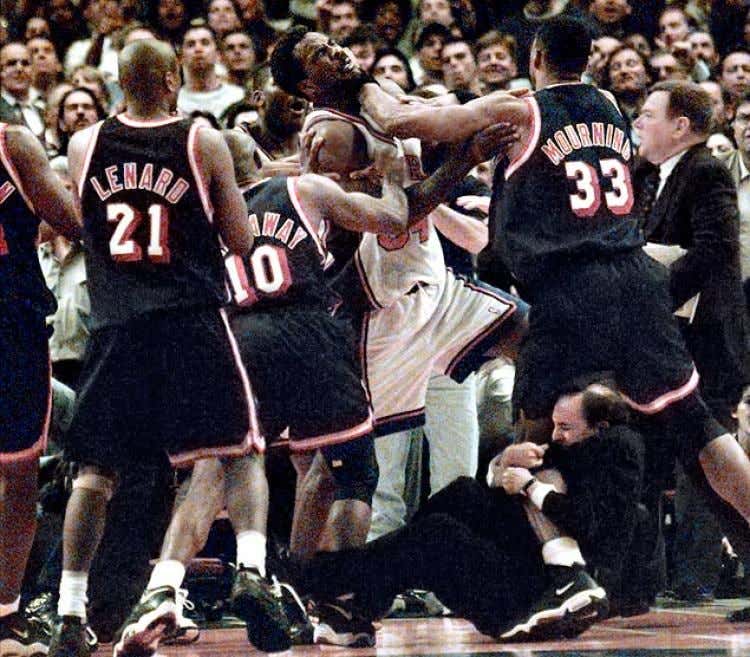 It has all the legends. JVG, Zo, Oak, Hardaway. Things that make people nostalgic.

Now, this fight is the one that’s remembered more simply because of Van Gundy. But, really it brought back the anger from the 1997 playoffs where the Heat advanced on what I’d like to call bullshit. If you don’t remember, the Knicks and Heat also had a brawl that resulted in the suspensions of Patrick Ewing, Charlie Ward, Allan Houston, John Starks and Larry Johnson. The Heat won that series in seven, which is when I learned at 10 years old that the Knicks would forever be screwed. That was the team that was made to beat Jordan’s Bulls. Would it have happened? Probably not, but that was the team set up to do that.

Am I still bitter? You tell me. But, yeah, probably. That will change if Durant comes to the Knicks this offseason along with the No. 1 pick and a guy called Zion.

I’m dying for something like this to happen again because it means the Knicks will finally have a rival again. The Knicks don’t really have a rival like they did back then simply because they aren’t good enough to have one. That’s all I want as a Knicks fan. I want the franchise to be good enough to where there’s a rivalry. There’s a long way to go still, but we can have hope. Until then: