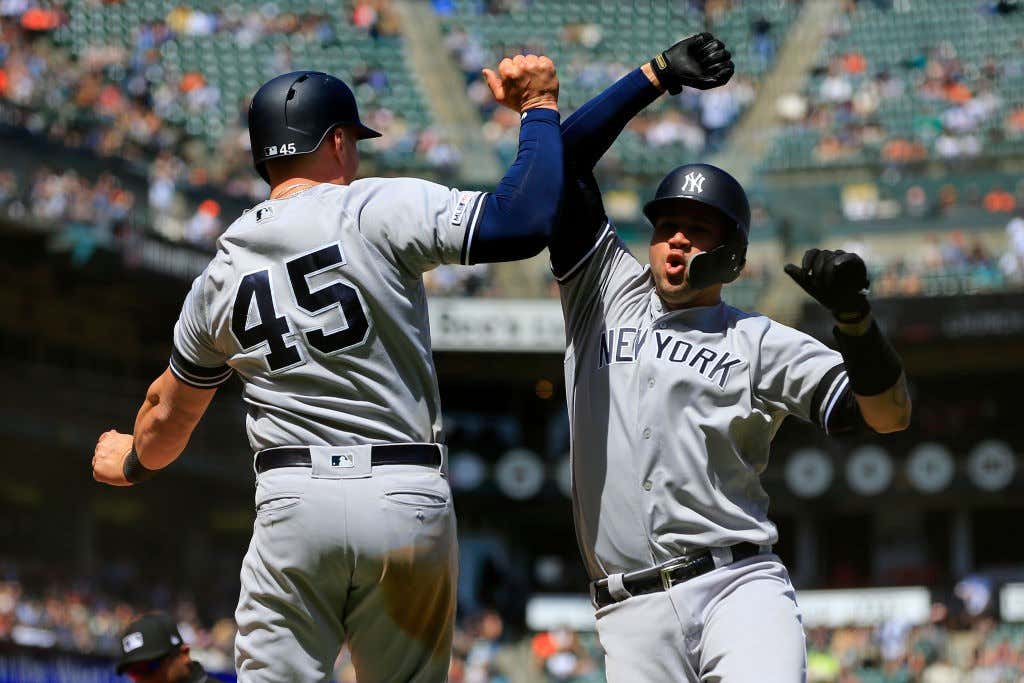 Same story. Different day. The beat just keeps on going for the New York Yankees. Today they lost two men to injuries on the battlefield, DJ LeMahieu and Gio Urshela. The extent of those injuries we’ll have to hold our breathes and pray, but Gio’s appears to be much worse than DJ’s from the naked eye. It’s crazy that we’re all terrified to find the results of a Gio Urshela x-ray, but that’s how good he’s been. (Update: both x-rays negative which is huge)

So how did the team respond? Without blinking. Win. Get Hurt. Repeat. It’s a lifestyle. It’s a winning lifestyle.

It appears Gary Sanchez is back to doing that thing where he demolishes baseballs. I’m a fan of this strategy if I can be frank with you guys. Having Gary in there over Higgy or Romine is just night and day. I love this whole next man up thing we’ve got going on, but Gary Sanchez doing this brings joy to my heart.

Statcast had that Gary bomb at 430 feet. I think they meant to say yards. I mean that ball went over the left field bleachers. What are we talking about with 430 feet? I don’t want to be rude to computers, but that’s just wrong.

Luke Voit continued his war path on Major League Baseball, picking up 3 more hits today. He extended his on-base streak to 39 consecutive games, which is the best in baseball. He’s just three games behind Tex for the longest Yankees streak since ’05. The narrative around this team has been the injuries, but not enough people are talking about Luke Voit continuing where he left off last year. After a mini slow start, where stupid people actually gave up on him, despite giving Greg Bird a decade to get going, Luke has just crushed baseballs. Since Judge went down last weekend Voit has slid into the 2-hole and taken off. I told you he would heat up on the west coast, but that honestly hasn’t done justice for this road trip.

In the seven games against LA and San Fran he’s slashed .433/.528/.867 with 4 homers and 10 RBIs. He’s been unstoppable. It’s only April 28th, but people outside of the Yankees bubble need to start talking about Voit as not only a potential All-Star, but maybe even a dark horse MVP candidate. He’s not a fluke, as I have told you countless times. I have made it my mission to find every Greg Bird apologist out there, who bad-mouthed my king, who is hiding in their cave afraid to come out and see what’s happening. I will find you and shame you to the world.

Domingo German got the start on a Sunday which is fitting since his first name translates to Sunday in Spanish. For five innings he was untouchable.

In the 6th, working with a big lead, he lost some of his effectiveness and gave up four runs. Maybe he got tired? Maybe he lost concentration with the big lead? Whatever it is, I’m not too worried. Domingo for most of the day was filthy and shutdown the Giants. I love him. Keep it going my friend.

All in all 11 runs on 14 hits. An effortless sweep of the San Francisco Giants. They’ve gone 11-2 over their last 13 which is the best record in baseball. This is all with spare parts and a bunch of guys who have really never had the spotlight before, but are thriving in it. Even today, Thairo Estrada comes in for LeMahieu and immediately picks up two knocks. The kid is hitting .429 since coming up from AAA and has looked just as good in the field.

It’s a true next man up, fuck you baseball gods mentality. They’re scrappy. They’re gritty. They’re relentless. I am absolutely in love with this baseball team. With that all being said, it sounds like Miguel Andujar feels great and is on pace to join this team next weekend, maybe even in Arizona based on DJ and Urshela’s outlook. It’ll be nice to get his bat back in the lineup since he reportedly is ripping the cover off the ball in Tampa right now. Gio Urshela, however, needs to stay in this lineup if he’s healthy. His glove is fucking outrageous and his bat has impressed beyond belief. I have no idea how Toronto and Cleveland just had no use for him. Idiots. Fools. Buffoons.

Join the movement if you haven’t already.