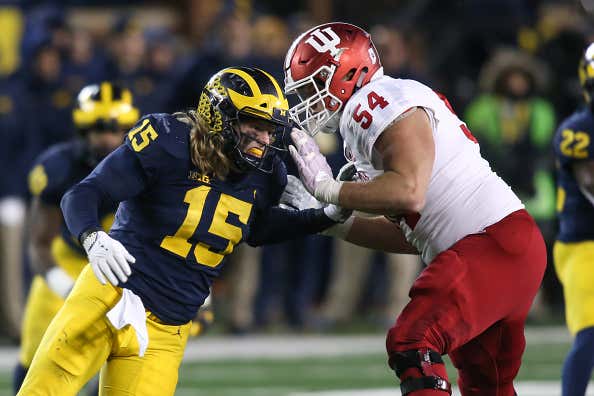 What would you say if I told you a polarizing, Thor-haired, sack-dancing, chest beating, pass rushing defensive ends that scouts can’t agree on hit the draft? That he’d go to Cincinnati? The Jets? Pittsburgh? Seattle maybe? One of those teams that traditionally embraces guys who [clicks on the Football Cliche’ Generator app] “play with an attitude” and “have swagger”? Nope. Not tonight. Not this draft.

The Patriots just pulled the trigger on one of the most disagreed-upon prospects in the entire 2019 Draft at any position. From my Edge Defenders Preview:

What I say? One man’s passionate, high-octane, nitro-powered funny car of football energy is another man’s self-promoting douchebag. It’s a matter of what kind of player you want to hand your coaching staff. As pleasant a surprise as his speed was at the Combine, some scouts who interviewed him were turned off and thought he was a little too high on himself and his celebrity. Not many of the draft pundits are in agreement, either. I’ve seem him ranked as high as the ninth best prospect at his position and as low as 26th. Wherever he ends up he’ll be a folk hero for as long as his somewhat limited athleticism will keep him around. I’d just hold off on buying your kid his jersey for a year or two. If you can rent one somewhere, that’d be the smart play.
Compares to the other leading brand: Markus Golden

And now he’s a Patriot. With a name that echoes of earlier edge defender legend Rob Ninovich and the charisma of Rob Gronkowski. The Michigan Wolverine who called out Michigan State:

Who was hung in effigy by Ohio State’s Mr. Big Nut:

And who shot his shot at Madonna’s daughter. Successfully:

SOURCE-NFL teams wanted to know about the time he went on a date with singer Madonna’s daughter, Lourdes Leon.

“It was probably at least like five.. asking about my date with Madonna’s daughter,” Winovich said.

I stand by my original caution that I’d hold off before I shell out money on his jersey. But damn if he isn’t giving off all the signs of a future folk hero. And my early pick to be the one to watch at the next Duck Boat parade.  Bring on Chase Winovich. I am utterly fascinated.