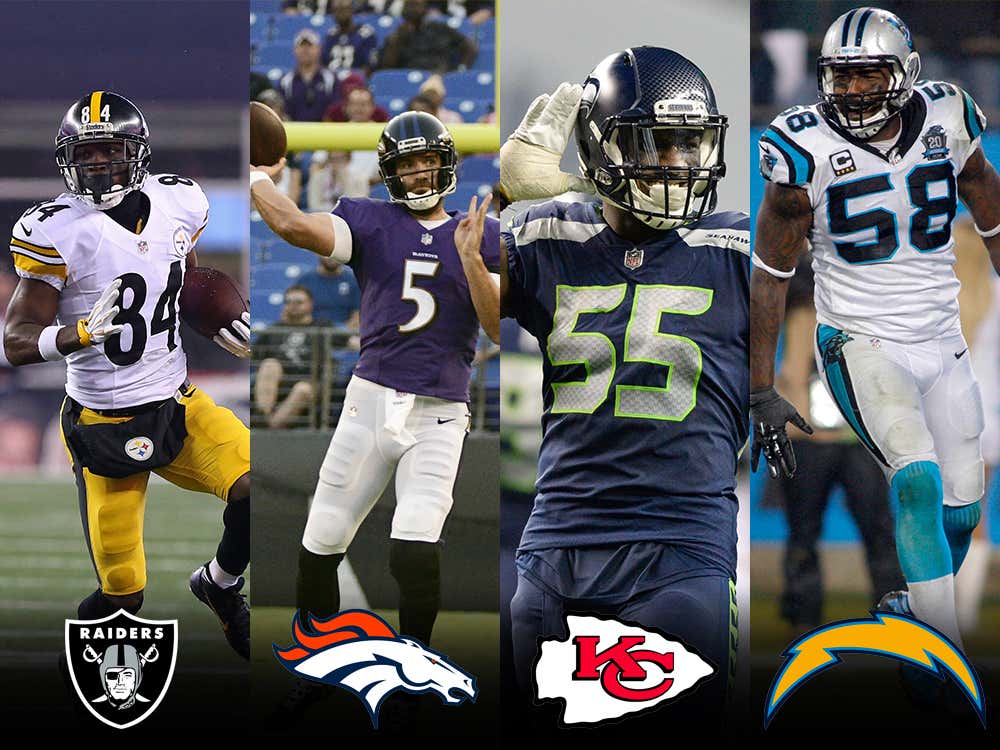 I have a little footballs blog action going on for you guys ahead of tonight draft with a comprehensive recap of the free-agency moves for all four teams. Why wasn’t I actively blogging the free agency, you ask? The simple answer is that I’m busy as hell with my primary responsibilities and struggle to find time to fairly cover 4 teams worth of moves (plust we have plenty of great football bloggers here that had it covered). Anyway, let’s look at some free-agency moves.

1. LB Thomas Davis Sr. (2-year, $10.5 Million) – A 14-year vet and captain of one of the better defensive units of the last decade at Carolina, he adds a great veteran presence to a LB core that needs a significant amount of help. The best years are behind the 35-year old, but he can help guide the younger guys into being the run-stuffers they need to be to not get ass-whooped by teams like the Patriots did to them in the playoffs.

2. QB Tyrod Taylor  (2-year, $11 Million) – Tyrod is a very serviceable backup (and a decent starter), but I’m not entirely sure this money is well spent considering that Rivers has the most consecutive starts among all active quarterbacks.

1. WR Tyrell Williams (Oakland) – Williams was a decent plug-and-play #1 option in the times that Keenan went down, but I’m happy that the Bolts didn’t dish out the bag for what would be a #3 receiver on that team at best.

2. DT Darius Philon (Arizona) – Man, I loved Philon’s highlight reel for the Bolts. He is above average at the position, which is better than the team has had in awhile.

3. DB Jason Verrett (San Francisco) – When he was healthy, he was a top CB in the league. The problem is that he was literally never healthy. 5 games over three years isn’t worth squat, regardless of talent level.

4. DB Jahleel Addae (TBD | Released) – Basically Bob Sanders, Addae was willing to literally destroy his body to make a hit. I respect that, but he also struggled in coverage and for some reason thought it was a good idea to laterall an interception that one time. What the fuck, man.

1. LB Denzel Perryman (2-year $12 Million) – Perryman is a BEAST but is also injured non-stop. I’m convinced if him and Jatavis were both healthy for the playoffs that the defense wouldn’t have been run over like roadkill. This is a smart, prove it contract. If he misses more than a few games, I doubt he gets another chance.

2. NT Brandon Mebane (2-year $10.5 Million) – Similarly to Davis Sr., Mebane is a great leader that knows what makes up a top 5 defensive team. He’s a decent rotational guy, but at 34-years old, don’t be expecting a crazy impact.

3. S Adrian Phillips (1-year, $2 Million) – He’s 27, just logged an All-Pro appearance as a special teamer but also logged 94 tackles at his position. This was a no-brainer and a pretty cheap deal.

1. TE Antonio Gates – Lynn said that they are in “wait-and-see” mode with him as of right now. It makes sense, and I’m not so sure that he should want to come back. He had extremely low usage even with Hunter Henry out for the year. Maybe it’s time to ride off into the sunset off a 12-4 season.

Thoughts: They haven’t made a splash compared to the other teams in the division, but I think they are in a unique position where they are in win-now mode while also preparing for the post-Rivers world.

1. DE Frank Clark (5-year $105.5 Million) – The Chief’s gave Seattle their 2019 first-rounder. a 2020 second-rounder, and swapped their 2019 3rd rounders for Clark AND gave him the bag. It’s part of their win-now strategy, and the 25-year old should certainly plug up some of the holes left by their departures. However he’s not exactly what I would define as a game-changer, and he is getting game-changer money.

2. S Tyrann Mathieu (3-years $42 Million) – They needed safety help bad, and Mathieu is still only 26 with plenty of runway to get even better. The numbers here are maybe a little overboard, but 70 tackles and 8PD is definitely exceptional for the Free Safety position.

3. DE Alex Okafor (3-years $17.9 Million) – This is very fair deal for a guy that should shore up their run defense tremendously as well as throwing in a few sacks.

4. LB Damien Wilson (2-years 5.75 Million) – I can’t imagine him making a huge splash, but he’s a good special teamer that can provide some rotational minutes.

5. RB Carlos Hyde (1-year $2.8 Million) – Hyde went from a franchise guy to a journeyman basically overnight, as the Chief’s are his 4th team in the last 12 months. He’s a good downhill runner that will maybe be a 3rd down back at best in this offense.

6. DB Bashaud Breeland (1-year $2 Million) – The DB market is thin, and the Chief’s depth at CB is even thinner. Breeland is an average-ish player so this isn’t a bad pickup.

OL Mitch Morse (Buffalo) – Morse was the 6th best C in the league last year according to PFF, and his departure makes C a big priority for the draft.

DE Justin Houston (Indianapolis) – Houston’s release freed up $14 million in cap, but he also accounted for 18% of the teams T-1 sack leading defense by himself. His play has certainly declined the last few years as he enters age 30, but his edge-rushing ability is going to be missed.

LB Dee Ford (San Francisco)  – That offsides call was, well, brutal. More importantly he doesn’t fit the new defensive scheme that Spagnuolo is setting up. They got a second rounder for him which is more than some teams have gotten star-dumping lately.

TE Demetrius Harris (Cleveland) – Harris was a physical specimen, but there just wasn’t much for him to do with Zeus around. Better for him to go than give him any of the money they needed for the defense.

1. S Eric Berry – He’s just not very good anymore and is understandably still recovering from his achilles injury. 2 years is just too long to wait for him to return to form.

2. RB Spencer Ware – They have a solid RB core as it is with the Williams’ and Hyde. He will likely get picked up by a team mid-season.

3. DT Allen Bailey – He’s a good body to have on the line, but they need some new blood for the revamped defense.

Thoughts: I don’t know if I agree with some of the money decisions with FA’s, but they’re going for a very specific defensive scheme that my dumb brain is too simple to understand. That all said, I fucking love the Honey Badger man.

1. WR Antonio Brown (3-year $50,125,000) – It took a 3rd and a 5th rounder, but they kept the first rounder they gained in the Cooper trade and gained a top 2 receiver in the league. Say whatever you want about Brown’s personality and off-field shit, the guy is a game-breaker. He’s coming off a 1300-yard, 15 touchdown season in Pittsburgh and I would imagine he gets roughly 1200 yards and MAYBE 10 touchdowns with Carr, whose downfield velocity has waned in the last few years.

3. WR J.J. Nelson (1-year, $1 Million) – Nelson is a guy Al Davis probably would have drafted first overall. He’s fast as all hell, can be used in sweeps to great effect, and should make for a great slot option.

4. OT Trent Brown (4-Year, $66 Million) – He was the best tackle in the market and got a league-leading average pay/year to show for it. Kolton Miller will presumably move to the right side while Brown protects Carr better than he ever could from the left.

5. S Lamarcus Joyner (4-year $42 Million) – Joyner is extremely adaptable, but sort of got phased out in LA. I can’t say he’s worth this investment, but at this point basically anything is an upgrade.

6. DB Nevin Lawson (1-Year, $3.050 Million) – Much like the addition of Breeland in KC, the market was thin and their CB core is thinner

8. QB Mike Glennon (1-Year, $1.950 Million) – Sort of a weird move considering they burnt a pick to acquire A.J. McCarron, but I guess they didn’t like what they saw from him. Glennon is dependable in a pinch and should be able to fill in for the oft-injured Carr if he needs to.

1. TE Jared Cook (New Orleans) – Cook was an absolute monster last year, rebounding from his terrible year with Green Bay to become a top 5 TE in the league. He will be missed AND I think Oakland could match the 2-year, $15 million that NO paid him, but alas.

2. OL Jon Feliciano (Buffalo) – He was versatile, but not exactly a stud at any particular position.

3. A.J. McCarron (Houston) – For some reason the Raiders burned a 5th round pick on him which now goes to waste.

4. DB Rashaan Melvin (Detroit) – He has the athleticism, but was never really a fit in Oakland’s defense.

1. DL Johnathan Hankins (2-Year, $8.5 Million) – Hankins was a good run-stuffer last year, and this is a bargain contract.

1. WR Jordy Nelson – He had a lackluster season transitioning to a QB not named Aaron Rodgers. Look for him to come out of retirement and join the Packers at some point in the near future.

Thoughts: I love the AB aquisition and think it’s the biggest FA move by any team in the whole offseason. My concern is the same one that I had when they got Jordy in that I don’t know that Carr has the downfield power to make the best use of him and Tyrell Williams.

1. QB Joe Flacco (4th Round pick) – Case Keenum was brought in for his ability to be sort of a game manager+ in a sense. He made lot of mistakes during his tenure that cost the team games, and this trade is the result of that. Flacco is 35 and is firmly and above-average QB. I do believe he will make less mistakes and is an upgrade from Keenum, but not by a huge margin.

3. DB Kareem Jackson (3-years, $33 Million) – Jackson known to get shifted all over the secondary, but at age 31  he will likely remain at safety for the Broncos.

4. DB Bryce Callahan (3-years, $21 Million) – A great fill in at slot CB, this signing was a bit of a gamble that his foot injury won’t have any residual effect.

1. QB Case Keenum (Redskins) – His era was a very lackluster ride, but I think it’s safe to say that he was a flop for what Denver had to offer.

2. C Matt Paradis (Carolina) – Ankle injuries are killer for linemen, but I think Denver could have matched the $9 mil a year that Carolina gave him.

3. OL Billy Turner (Green Bay) – Turner is a guy that can play across the line, but probably wasn’t worth was GB paid for him.

5. LB Shaq Barrett (Tampa Bay) – He was never going to get playing time, so it’s an unfortunate goodbye.

Thoughts: I like the Flacco trade a lot because they didn’t lose a lot to get him and his value added is enough to make them a possible contender to come out of the AFC West. They are going to need to shore up their interior line and DB’s a lot to compete with the offenses they will be facing this year, though.

I’ll have a recap of the first round of the draft tomorrow. If I’m missing some moves, tough shit. I’m writing while prepping a billion assets for the ‘Avengers: Endgame’ drop tonight buddy.