Good news everybody. I played that video of Jacob deGrom light tossing with the volume all the way up on my computer and didn’t hear anything resembling a bark, growl, or even a whimper. All I heard was the beautiful sound of cowhide hitting leather along with my Tony Soprano heavy breathing.

Now clearly we are not out of the woods yet because Jacob deGrom has gone from having strep throat to needing to fly to New York to have an MRI on his elbow to throwing without any issue and maybe not needing an MRI at all, which would be a wild turn of events for most franchises but pretty much par for the course with Mets fans. I personally would like it if every Met got an MRI before and after every game, even though 162 trips to a machine that does magnetic resonance imaging is probably not the best thing for anyone’s health. So I am going to tell myself that Jake just got a little sore from the antibiotics he was taking for his strep throat. My 1-year-old was on bubble gum medicine all week, which caused him to be irritable and shit his brains out. Hopefully Jake’s elbow barking was just a side effect to bubble gum medicine and he will be pitching as soon as his 10-day stint on the DL is over. And if everything works out, we can end up spinzoning into all this being a good thing since it gave Mets Twitter its first 5 alarm blaze fire drill before Easter as well as three fantastic newspaper headlines. 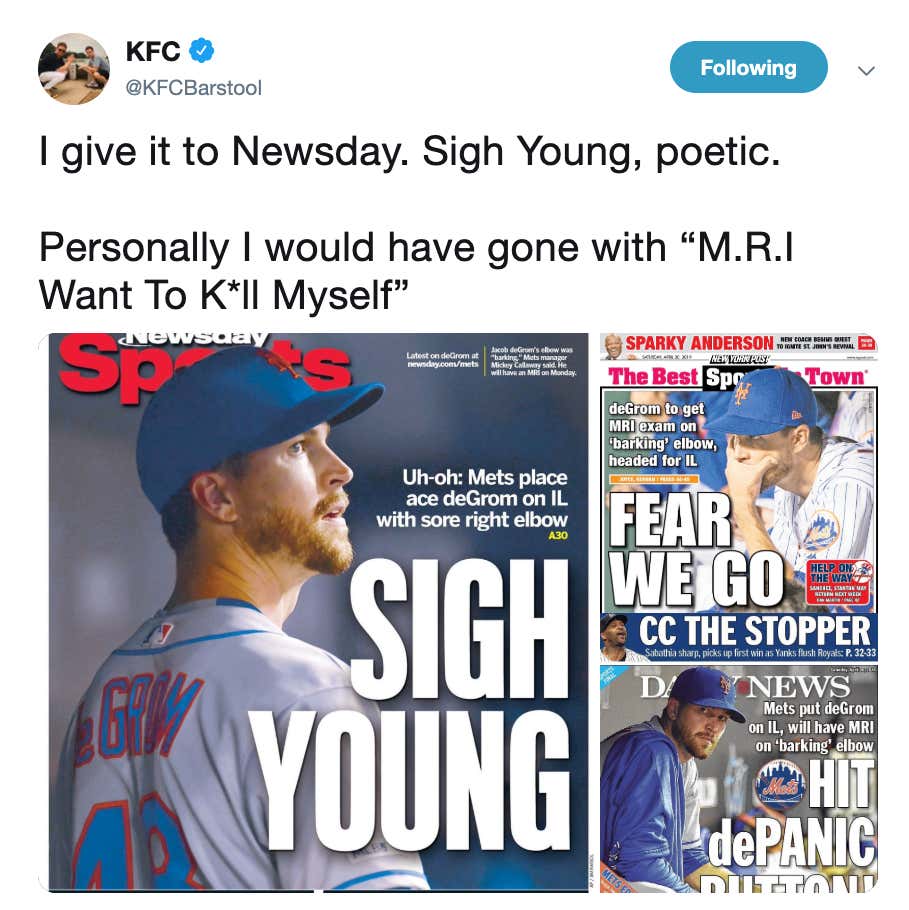 Regardless of what happens the next 72 hours, I’m sure the first episode of the We Gotta Believe podcast for Mets fans hosted by myself and KFC will be a doozy of a premiere when it launches on Monday, especially since we will be kicking if off with two episodes. That’s right, a doubleheader on Opening Day. So follow along on Instagram and Twitter while we continue to ride this rollercoaster together. iTunes link will be coming next week.