This is interesting. I appreciate the analytical mind that can look at 256 games  over 17 weeks and break them down into patterns and find the ways in which some teams are getting treated worse than others.

I respect it because my brain doesn’t work like that. I’m one of those people who, when the schedule comes out, looks for how it affects me. Which are the best matchups, when is the bye and so on. I know season ticket holders immediately look at the prime time games, because those are a nightmare. A lot of guys look for a road game in a warm weather city late in the year so they can plan a trip (looks like this year it’ll be @ Houston on Sunday night, December 1st) and turn it into basically a Patriots home game. But you won’t catch me looking for those because those Knee Jerk Reactions don’t write themselves. Yes, it’s my calling. But it’s also my occupation. Duty calls.

So I would never have caught this business of the Pats facing the most rested opponents of any team in the league. The fact that’s a huge disadvantage is self-evident. It goes without saying. So what’s my reaction?

Ho-hum. Or to put it the way the coach does any time an issue with the schedule comes up, “We just play the schedule we’re given.” Or better yet: 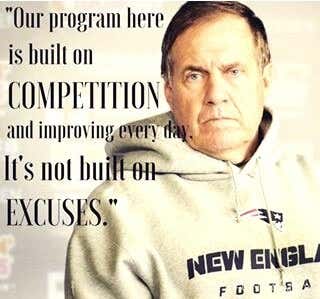 So it’s patently unfair. So it’s a decided disadvantage. So what else is new? The league has probably been doing this to them for years without anybody doing the math. They’ve already been a victim of their own success by being saddled with more prime time games than anyone. It’s like grading a test on a scale. Sure you punish the smart kids but it’s giving hope to the dumb ones who don’t study. So they’ll deal. They’ll adjust. They’ll find a way. Like two years ago when they had to play in Denver and Mexico City back to back. So they simply stayed in Colorado, trained at the Air Force Academy and were perfectly acclimated to the altitude and won easily. Or 2014 when they went right from Green Bay to San Diego, practiced out there for a week and visited the Naval Hospital. It’s what they do when the Ginger Satan forces the enslaved elves who make his schedule to try to find a way to screw New England just to make it fair. And if it doesn’t bother them, it doesn’t bother me.

At least we know how Stephon Gilmore is approaching it.