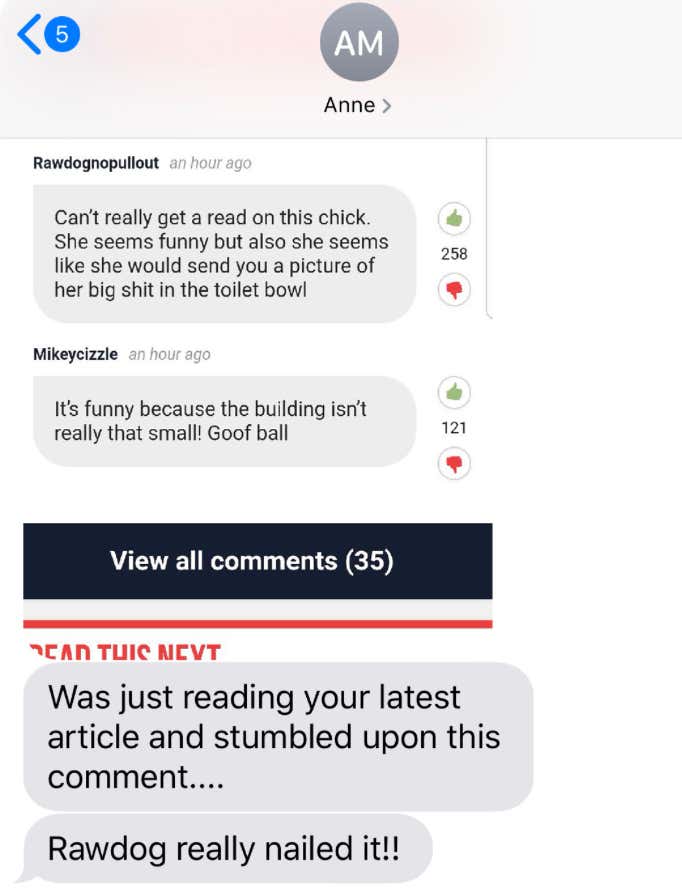 When I first started working here, several people from different areas of my life who did not know each other – a cousin, a friend, and a former co-worker – each sent me a screenshot of the comment above with some variation of, “Rawdog was spot on haha”.

The observation about me that sparked this mutual agreement among strangers?…

“Can’t really get a read on this chick. She seems funny but also she seems like she would send you a picture of her big shit in the toilet bowl.”

I was brand new here, and apparently this was the strong first impression I gave off.

Well then, allow me to unleash a honkin’ nostalgia dump in the toilet bowl of this blog as we swirl through my first year at Barstool Sports.

Since I’ve covered it before, I’ll just leave some links to the basic origin story of my path to get here: Infamous Vagina Calzone // First “>ZeroBlog30 Appearance // Full Time goofin’.

The last 366 days have been a whirlwind & an adventure that I’m grateful to so many people for, especially Chaps for taking me under his tattooed wing, and Dave for taking a chance on someone with no following or real prior experience, and coworkers who’ve helped me figure things out along the way.

A year ago I was taking the beginner classes to become a dental hygienist at Delaware County Community College, and not so much because I’ve got a passion for flossing stranger’s teeth until they bleed (but I mean, who doesn’t), but because I needed the GI Bill money to keep my apartment & didn’t know what else to do. I’ve rambled about it enough, but before that I’d hit a speed bump in life & had been living in my aunt’s basement working concessions at Flyers & 76ers games, feeling like it was finally time to give up on my dreams & move on.

I cried on the train home when I got this job, and not just because I celebrated with two tall crispy bois while listening to uplifting tunes and cry easily; I’d just hit my 30s & was desperate for a break, and maybe for a little bit of health insurance.

For people sliding in my DMs who want to work here or do something similar, all I can say is the one thing I kept up through any ups & downs was writing, even if it was for no one, or even if I got rejected from every single place I submitted stories. To this day you’ll rarely ever catch me without a notebook full of wacky ideas & jokes, and it’s something I still work on in my free time. (If I lose that notebook & you find it, please do me a solid & burn it. It gets weird in there.)

I also made an effort to post on Twitter every day & Instagram often, and curate a supportive community for myself that I wanted to be involved in. (For me that was comedy, news, veterans affairs, art/pop culture & Philly *sports. *Loose emphasis on that sports part, even though it’s called Barstool SPORTS, u guys.) Basically, if I hadn’t been actively floating around in those worlds, Chaps would have never seen that first tweet I put out. That being said, I’m well aware that sheer luck (right place, right time) played a huge part.

You also can’t be afraid to fall on your face publicly (I quite literally just did this a couple weeks ago). I went to an open mic last night and got ZERO laughs. Not even a polite, pity one. Not every joke or idea is going to hit, but that doesn’t mean you suck or should quit, even if several commenters repeatedly ask, “When are they going 2 fire this cunt???”. (Hopefully not any time soon because I’d like to get Invisalign & new glasses this month.)

And ok, sometimes you do sort of suck, but that’s part of growing in anything you do. Anyone who doesn’t give you the space to suck a ‘lil bit truly does suck, and to them I say,

So keep pluggin’ away at whatever you love and something good will happen for you, even if it’s not exactly what you envisioned.

Anyhow, because I’m talking about me and am taking the opportunity to continue to talk about me, and have a I mentioned me??? Here’s some of my favorite videos from this past year.

Early on I’d just roll solo & use my cell phone to record things, because I was so clueless I didn’t know I could ask for a videographer here to accompany me.

In May I explored the office…

…and went on a 209 Mile hike with some incredible Marines & ROTC students from Auburn U.

…and went to the Indy 500 where no one knew who the hell I was & thought I’d just found a Barstool mic on the ground.

By mid-summer I discovered I could ask for help & dragged our video guy John through the Museum of Sex in a weird attempt to tie that in with the World Cup.

It was also around this time I learned people will see you at both your best and your worst in this job.

By Fall I finally felt at-home enough to goof around with co-workers..

And I got to go on awesome trips like our Starbucks tour with ZeroBlog30/Chaps, visiting amazing vets from several states.

Plus the Marine Corps birthday ball in Philly.

And the Atlanta Super Bowl trip. Along the way, getting to roast Chris Long on Pardon My Take was a huge highlight of the year. Definitely one of those, “Pinch me, I’m in an RV with a nipples shirt on doing stand up, this is too good to be true,” moments which I’m sure everyone has.

Is anyone still following at this point as my self-absorbed anniversary ramble continues? If so, please leave ‘Kate seems funny but also she seems like she would send you a picture of her big shit in the toilet bowl,’ in the comments.

In closing to highlight some of my more high-brow stuff, one of my proudest accomplishments was getting the company card from Dave to pay for a male stripper at an office full of dudes.

Here’s to an amazing year at a place that lets me be myself & allows me to pursue whatever ideas pop up. I get to write, make videos, speak my mind on radio with Hi Haters!, and meet the nicest Stoolies from around the country. Barstool gets a bad rap for its followers sometimes but overwhelmingly it’s nothing but positivity & good vibes. It’s a gift and I can’t wait to see what the next year brings.

Oh, speaking of – If you’re in the neighborhood you can join me, Dave, Caleb, etc. in Talladega (Ticket package HERE!!!). Not 100% sure if I’ll be wresting in BBQ sauce but odds are good. Whatever I wind up getting into, I know I’ll be feelin’ gratitude just to be part of it.