Ajax are quite possibly the most entertaining club in the world right here right now.

Got DAMN that wee Messi fellow is good at soccer.

It is no surprise that Messi treated United like his personal plaything, of course, as he has been doing it for years. Nevertheless, it is never not enjoyable to see a god amongst men doing god amongst men things, which is my way of trying to politely remind you to stop and smell the roses. Not long from now we will look back on the last 10 or so years with Messi and Ronny going back and forth murdering defenders and winning Ballon d’Ors as the golden years of soccer. Let’s bask in the last few years (at most) of it while we still can.

But that was then and this is Wednesday, and we’ve got more games on deck. So let’s start with the sweet sounds of glorious soccer:

Prior quarterfinals results and today’s schedule: 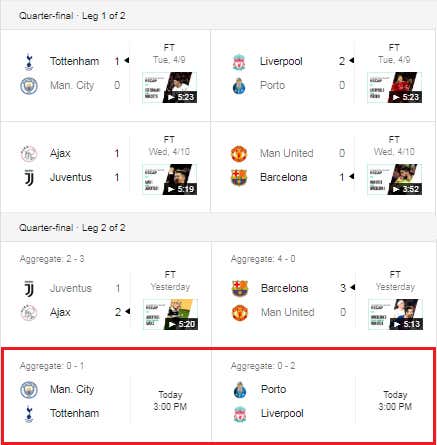 One could argue that the next few days are the biggest in Pep’s career. It is tough to argue with the success he has enjoyed everywhere he has gone as a manager, winning everything under the sun with Barcelona and most things under the sun with Bayern. But he consistently fell short in Champions League with Ze German Giants and has continued that trend since joining City in 2016 – winning all sorts of domestic trophies but repeatedly failing to win the big one. With some traditional (Real Madrid and Juventus) and wannabe (PSG) giants having already fallen by the wayside, the odds of City winning Champions League have probably never been better than they are right now. Add to that the fact that the Sky Blues are in pursuit of an unprecedented quadruple (ie, winning four trophies)… and this team has the potential to go down as one of the greatest ever.

And yet – annnnnnnnnnnnnd yet – they could just as easily (and almost as quickly) go from possible heroes to relative zeroes in less than a week if they can’t find a way to beat Tottenham “Trophies Are For The Insecure” Hotspur… who they play not once but twice (both at home) over the next four days. 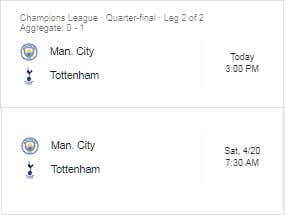 At this point in the season there are no real surprises to discuss for either team. We talked about it last week before the first leg for heaven’s sake. But here is a distillation of the facts as we know them:

– Tottenham are missing their best player in Harry Kane, and (arguably) their second best in Dele Alli is questionable with a broken hand – Advantage: City

– As good as they are, City have not played well lately, struggling to beat a slew of bottom half clubs and not looking too terribly dangerous against Spurs in the first leg – Advantage: Spurs

Pochettino will likely go with a three-back system (Alderweireld/Sanchez/Vertonghen), which will make them difficult to break down. Unfortunately for Spurs their wing backs – Trippier on the right and Rose on the left – have not been nearly dangerous enough on a consistent basis for City to be terribly troubled. (This is in stark contrast to a club like Liverpool who have in-form backs coming at you from both sides in Robertson and Alexander-Arnold.)

City will try to hold the ball, dinking and dunking it around Spurs’ half trying to find some sort of opening, ultimately finishing the game with at least 65% possession (if not more). They need a goal, after all, coming in down 0-1 after the first leg. City clearly have enough weapons to slice Spurs apart if they are sharp. The biggest question – in fact the only question that matters – is whether they will be. They haven’t been on many occasions lately, which should give Tottenham some hope. They are likely only going to get a handful of looks at net. All it would take is a moment of individual brilliance from Heung-min Son or Lucas Moura to change the dynamic from Spurs being a heavy underdog to favorite since an away goal would mean City have to score three. Not unthinkable given City’s firepower but definitely a big ask against a Tottenham team that will be bunkering as if (because) their life depends on it.

Spurs winning the first game between the teams then losing the next two – the only ones that actually count – makes a TON of sense, but if they are going to win either of the next two games I think it will be today. Several City players (eg, Aguero and Fernandinho) may be a little rusty. If they play the way they did against in most of their recent wins, Tottenham have a legitimate chance.

I’ve been down this road too many times though. I know how this movie ends. It would make it all the funnier if Spurs score first so I really start thinking they actually have a chance… before City storm back and curb-stomp the last remaining viable cells of my cold black heart into dust.

At least they can’t take that away from us!

Liverpool are in a tricky spot. Had they gotten a third goal in the first leg this would be more straightforward, but 2-0 is worst lead for a reason (people definitely forget that)… if Porto can ride the wave of emotion from the home crowd and somehow get a goal then momentum and belief could become a dangerous combination for the Reds. Liverpool were the better team in pretty much every facet of the game and on paper there is no reason why they shouldn’t dominate again – especially with Pepe back in the lineup for Porto, which means there is a 46% chance they will finish with 10 men. The first rule of Champions League is never underestimate the Portuguese… so I’ll give them a little credit and say they manage to keep it close. Liverpool to win 2-1.

Unrelated to today’s game, but in case you have so many nervous emotions built up inside of you and just need to let it all out with a good cry… this should help:

Lots more action coming up tomorrow. Kidding, it’s just Europa… though it’ll be worth keeping an eye on whether Arsenal can hang onto their well-deserved 2-0 lead heading back to Napoli – never a fun place to play. 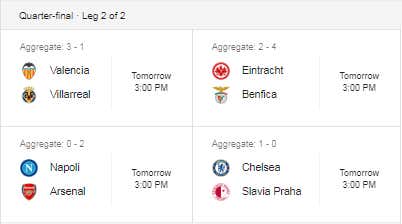