Come and talk some shit let’s go. I’m ready for it. Yu’s ready for it. Everyone everywhere is ready to defend the $126M man coming off his first set of back-to-back 5+ inning starts in a Cubs’ uniform. Hear that? It’s the sound of National League franchises everywhere crying for help except no one is coming because Yu Darvish killed everyone already. That’s the sound you’re hearing.

In reality, the Marlins suck so bad that Derek Jeter should be under federal investigation for this lineup 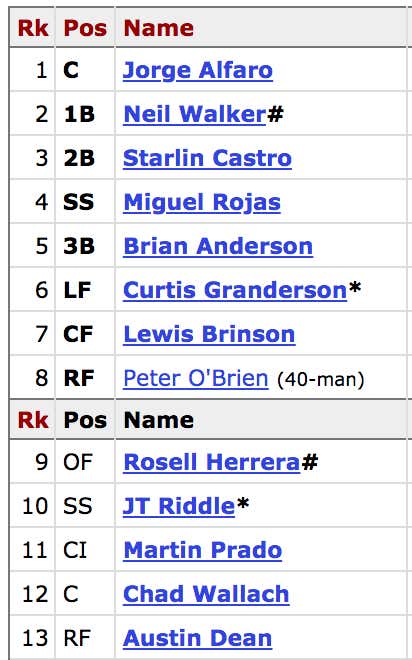 In other words the Marlins suck big time so let’s not get too excited, right?

We’ve been dying for a sign of life from Yu and finally we have it. I don’t want to get ahead of myself but it’s obvious he’s about to go off on a ridiculous hot streak. In NBA Jam we called it Heating Up.

Other notable things from tonight include this play from Albert Almora

And this catch graphic?

At some point you think the data people are going to lighten up. Like we get it, nice catch. We don’t need a graph and charts and a powerpoint to make the point. What else.

Willson Contreras is hitting ROCKETS right now. This past weekend included two dingers at a combined 920 feet. He now has 6 on the year in 14 games. Over half his hits are for extra bases with an OPS at 1.300. Real video game stuff.

At the same time I speak for everyone when I say none of this matters if Cole Hamels is going to get a concussion from shaking him off 350 fucking times every single start.

The bullpen went 3.2 scoreless which brings the staff ERA over the last week down to 2.50. Steve Cishek picked up the bulk of the work meaning other guys get another day off, which is something David Bote would never want because David Bote never takes a day off. Ever.

Keep this in mind in mid-July when your buddy’s like They need to be playing Bote A LOT more as he reads off baseball reference stats off his android.

And of course this happened:

Just a classic tribute to Jackie Robinson with the 42 on his back taking the extra base. Javy goes 3-5, Cubs win and now we’re all officially one step closer to actually enjoying the 2019 season.