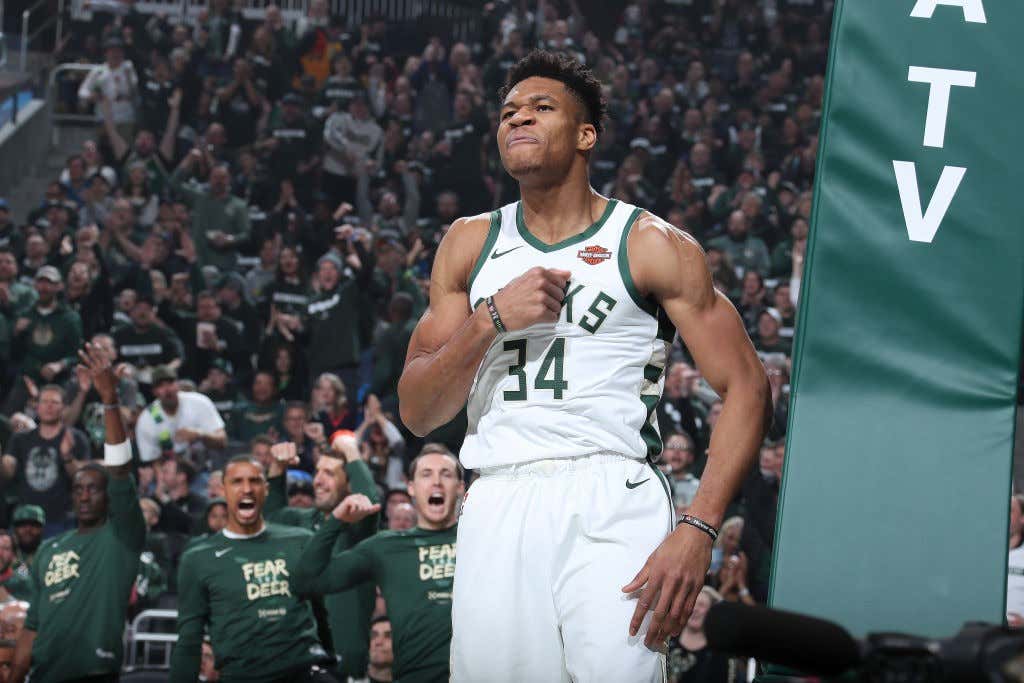 Good morning everybody happy Monday and welcome back to another edition of Last Night In The NBA where we bring you up to speed on everything that went down from the night before in the Association. It was a jam packed Sunday, maybe one of the best Sundays of all time, so I understand if maybe you were a little preoccupied and missed some of the basketball action we got yesterday. After the playoffs got off to a great start on Saturday night with upsets left and right, Sunday was a little more like we expected. Only one of the four games was all that close so if you were looking for another night of late game drama Sunday wasn’t exactly for you, but it was still filled with outrageous individual performances that for sure make it worth your time. Like I said with so much going on yesterday maybe you weren’t able to catch everything, so here’s what happened.

We’ll be going over things from a Celtics perspective in their normal blog, but don’t let the final score fool you this game was not all that close. The Celts basically took everyone out midway through the fourth with the game pretty much out of hand, and for a team that’s so damn inconsistent I won’t complain one bit about not even scoring 90 points. Win pretty, win ugly, I don’t give a shit just find a way to win so I can get these jokes off on Twitter.

In reality, we saw a lot of the issues for IND that make people think this will be a tough series for them. You would think that a low scoring grind it out type game would actually play to the Pacers strengths, but their lack of scoring is really going to be difficult for them to overcome. Especially if the Celts actually show up and defend like they did in this game. Obviously scoring 8 points in a quarter in the playoffs is always going to come back to bite you like it did with the Pacers in the third, and they need to figure out ways to score other than DHOs because it appears the Celtics have those covered.

As a team they shot just 33/22%, had only two players in double figures and just 9 OREB which was supposed to be a strength for them in this series. You score 74 points and highlights are limited, but here ya go

That block was pretty ridiculous, so there’s that.

I could not wait to see this series. OKC dominated during the regular season, the Blazers once again a 3 seed looking to avenge their disappointing first round sweep from last season as a 3 seed, something tells me this series is going to be an absolute battle to the death. Add in the fact that you have Enes Kanter facing his old team and there is certainly no shortage of storylines. Well right from the jump Dame came out and set the tone with a deep three, the Blazers got off to a great start an really never looked back

What do we know from watching POR all year? They live and die by their backcourt, when those two are feeling it like they were last night this team becomes very hard to stop, even for an elite defense like the Thunder. What puts POR over the top is when they get solid contribution from a third guy, and while that guy used to be NUrkic, Enes Kanter stepped right in and was fantastic

Those three did most of the heavy lifting for the Blazers, and a combination of their outside shooting and consistent effort that gave them the win, they never settled even once they got up big. This is a team that definitely knows how to win in their own building (32-9), and now we’ll see if they can get it done now that both sides will make adjustments.

For OKC, your goal is just to split, so this really isn’t that big a deal. The bigger deal is whatever the hell is going on with PG13’s shoulder. He said 4 days ago he could barely lift it, and while he did finish with 26/10 it came on 8-24 shooting which isn’t all that great. Westbrook was his old self throwing up a triple double

but look you go 39/15% with 16 TOs and it’s hard to win on the road in the playoffs. The Thunder’s outside shooting of 5-33 was a big time problem, and a lot of that was George. He went just 4-15 from deep with 4 TOs which certainly isn’t very Playoff P-esq. What they did do is dominate the boards, especially the offensive glass, so if they can continue to do that and just not shoot like assholes, they can definitely walk away with a split. It’s not like the Blazers went crazy, they only scored 104, so if Westbrook’s ankle is OK and George’s shoulder holds up, this series is still a long ways from being over.

You want to know what series is over? This one. Wrap it up, and really don’t even make MIL play the rest of these games. Just hit sim playoff round and let’s keep things moving. Yeah the Pistons didn’t have Blake Griffin which is sort of important, but come on he’s not making that much of a difference. It also didn’t help that Andre Drummond got tossed for a flagrant 2 for this play

The Pistons shot like shit, have no guard play, no shooting, and were 15-26 on the road this year. Almost every playoff series is going to be competitive on both sides, but this one may be the only series we don’t see an opponent break a sweat. Makes you wonder if CHA would have put up a better fight.

But hey, at least Luke Kennard had 21 off the bench

For MIL, this is sort of what we expected, and even with that Giannis gave us some stuff that makes your head explode. Like dunking from the fucking FT line in a playoff game like it’s a simple layup. What even is that

But like it so often is with the Bucks and their success, it was about more than just Giannis, he got help from pretty much everybody

I mean this thing was never close. Up 20 after the first quarter, they dropped 70 at the half, and no MIL starter played more than 25 minutes. If that’s not a perfect playoff debut for this 60 win Bucks team than I don’t know what is. Their goal is obviously to be as rested as possible heading into the second round, and if this series goes 5 games I will be absolutely stunned. Even the guys who came off the bench played well outside of Mirotic, and the scary part is they only went 15-43 from deep and missed 8 FTA. They can get better.

I give UTA credit for hanging around as long as they did, but things eventually got a little out of hand in the fourth quarter. Tough to lose that final frame 39-19, but look there are positives to take away for the Jazz. Sure they shot terribly with 39/25% splits and had 18 TOs, those are the bad things that had a pretty big impact on their loss. But the good news is Donovan Mitchell had his moments

and Gobert was a force as well

Their problem is really guys like Rubio have no chance of staying in front of Harden, and you can’t go on the road and turn it over like that against an offense like HOU that is just begging you to give them extra possessions. The second unit wasn’t all that much help either, no Jazz bench player made more than 1 FGM, and nothing we saw last night told us that this is going to be a long series.

For HOU, I think everyone who follows this team exhaled a little bit. What we saw was classic Rockets basketball. Decent shooting with 50/36% splits, 15 3PM on 41 3PA, low turnovers with 10, swarming defense and then when it came time for Harden to do his thing, he delivered

You know how the Rockets have some sort of ridiculous record when Harden/CP3/Capela are healthy and play together? Well last night was an example of why that is

Always nice to start off with such a giant win, especially given the Rockets postseason failures recently. This is a team many think are the only ones who could possibly take down the Warriors, and if they play like this I can see it. As scary as it is, I think HOU can play even better, Harden was just 11-26, Daniel House Jr just 4-11 off the bench, and as a team they only took 12 FTA. Usually we see Harden take 12 himself, so just wait until this team starts getting to the line.

And that’s it! You’re now all caught up on everything that went down last night in the NBA. We’re tonight back with a pair of very important Game 2s in BKN/PHI and LAC/GS, and as always if you can’t watch just check back in the morning and I’ll fill you in. Have a great Monday!