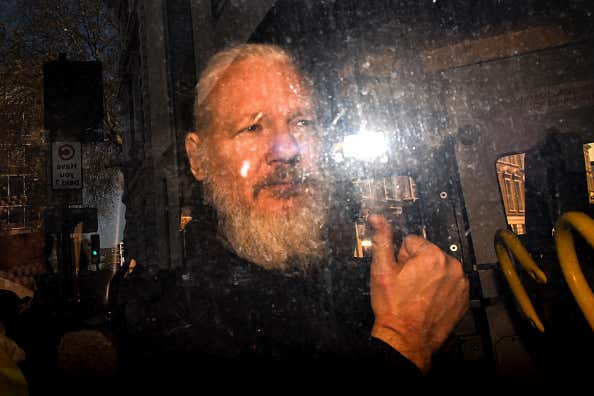 DAILY MAIL – Julian Assange smeared feaces over the walls of the Ecuadorian Embassy in London before he was hauled out of his seven-year-old hideaway.

The revelation was made by Ecuador’s Interior Minister after the Wikileaks founder was dramatically arrested by British police officers today.

The country’s president Lenin Moreno accused the Australian of ‘discourteous and aggressive behaviour’ as he confirmed the south American country had withdrawn his asylum status.

If there’s one person you don’t want to talk shit about (no pun intended) when your livelihood depends on computers and the internet, it’s someone who is an expert at hacking your computer and internet.  All journalistic integrity goes out the window when it comes to someone with full access to your social security number and penis pictures.  Just simply here to print the facts and observations about a big news story.

If you’re like me and were wondering why Ecuador changed its mind after 7 years and decided it no longer wanted Julian Assange camped out in their London embassy, I think we found one of the main reasons:

But the country’s Interior Minister Maria Paula Romo hit back by claiming Correa had allowed the 47-year-old to get away with some unimaginable behaviour.

She said: ‘During his stay at the Ecuadorian Embassy, during the government of the former president Rafael Correa, they tolerated things like Mr Assange putting faeces on the walls of the embassy and other types of behaviour of this kind that is far removed from the minimum respect a guest should have in a country which has generously welcomed him.’

Wild move.  Arguably a short-sighted move, to smear your poop on the walls of the only home that will have you and protect you from what I would imagine to be a Smokin’ Aces/John Wick bounty situation going on outside those walls.  But who knows the situation.  Maybe there was good reasoning behind it.  In my experience you don’t get poop smeared on your walls unless you do something to really deserve poop on your walls.

ABC News reported on some of those “other types of behavior” mentioned by the Interior Minister:

…He reportedly took over the women’s bathroom, per the International Business Times, which quoted sources last January saying Assange had poor hygiene. “It seems he doesn’t wash properly,” one source told the publication.

A friend and former colleague was quoted saying that “unless the people around him force him into the shower, he might not change his clothes for days.”

And another friend said, “Julian ate everything with his hands and he always wiped his fingers on his pants. I have never seen pants as greasy as his in my whole life.” (ABC News)

Ok, I’d probably ask him to pack his shit and move to the Motel 6 down the street after 7 years of that too.

Take us away Pamela Anderson from Baywatch.