A petrol station worker sprayed a fire extinguisher on a driver after he refused to stop smoking in Hangzhou City, east China’s Zhejiang Province. The driver was detained by police for three days on suspicion of smoking in a place with fire and explosion hazards.

I don’t know how raises, awards, or pretty much any sort of compensation works in a communist country like China. But this gas station worker deserves a promotion, a raise, an Employee of the Month plaque, and a golden star on his Chinese Citizen chart for seeing something then doing something without his pulse increasing a beat. Ruthlessly efficient.

There are not many times you can blast someone in the face with a fire extinguisher (which is probably pretty fun to do) and be completely in the right. But a person willfully smoking near a gas station is one of them. I’m not just talking about the first blast to extinguish the cigarette, either. If you light up anywhere on the property of a gas station, the people that work there should be allowed to unload an entire fire extinguisher into your grill for the rest of your life. Or at least the rest of the day like the guy in this video did when he just kept shooting the extinguisher at the guy after he left his car. 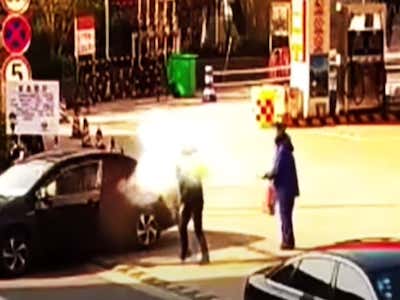 There’s dumb, there’s stupid, and then there’s having less common sense than even Derek Zoolander.

If you fall into that last category and put the lives of a bunch of people at risk, you deserve a shitload of white extinguishing gas directly to the face every day for the rest of your life that could have ended because you had a nic fix in a gas station parking lot.