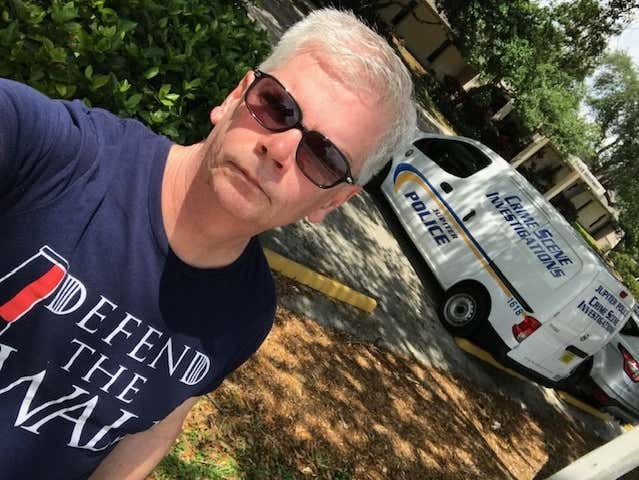 Unless something breaks in the next couple of hours, it would appear my journey into the epicenter of Tug Life culture down here in America’s Dangling Wang will end close to where it began.

I started at Ground Zero, the Orchids of Asia Day Spa and its surrounding, very hostile strip mall environs. Continued my Hero’s Journey to the Dragon Foot Spa where I got a Tugless Rub and found out how this witch hunt has negatively impacted the legitimate business- and working people of in the industry. Tried to speak with Sheriff William D. Snyder, the career politician who has talked most about this case even though his staff admitted to me he has no jurisdiction and is not involved.

Well when it comes to me armed with nothing but a phone, Snyder finally met a microphone he wouldn’t grandstand into because I got turned away. And referred instead to the people who actually did do the investigating, faked the bomb scare, slipped the secret cameras into Orchid, recorded and watched hours of innocent citizens getting naked massages, stopped a car and asked for the passenger’s license without cause, and then went public as soon as they realized he’s a world famous businessman: The Jupiter Police Department.

Annnd … I got nowhere. Which is to say, I got no further than the very pleasant uniformed woman at the front desk who put me through to both the main detective on the case and the department’s Public Information Officer. Both let it go right to voicemail. I left messages with both. But as the old saying goes, when the phone don’t ring, you’ll know it’s them.

I will follow up with emails and then get my newly-massaged ass out of God’s On Deck Circle and back to civilization. But just so they’re out there, this is where the conversation would’ve gone from my end, if I ever got to have it. If I get responses, of course I’ll post them here, verbatim:

–Your investigation into sex slaves being held against their will in a strip mall lasted six months before you went public. At what point were you planning to begin the rescue operation?”

–After a six month investigation, exactly how many hours elapsed between the time you ID’ed a famous Orchids customer and you called the press conference of February 22nd to announce it?

–Would you have made the same announcement if the passenger in the car turned out to be the shift manager of the Palm Beach Cheesecake Factory?

–When is the passenger in a car supposed to produce an ID anyway? If I’m driving my mother-in-law to the hospital for her treatment and I roll through a right-on-red, does she have to show her driver’s license? What if it’s my 7-year-old niece with me, playing in the back seat on her iPad?

–How many sex trafficked women were behind held there at Orchids? More than one? Less than 20? Could they have formed the starting lineup of an All-Sex Captives basketball team, or a travel softball team?

–How many videos of taxpayers getting a naked massage with no orgasm at the end have you recorded?

–What’s the budget on faking a bomb scare, going in to a private business and planting hidden cameras?

–When they wrote the “Sneak & Peak” warrant into the Patriot Act, didn’t they specifically mention it was to stop foreign and domestic terrorists from mass murdering thousands of people? Or did Congress write an exception in there for spying on ladies rubbing one out of a paying customer?

–Sheriff Snyder, you told WPTV, “We only do video surveillance under the most extraordinary circumstances.” Does a hand job qualify?

–You also told them, “We did not monitor women that went into the parlor. We just assumed they were there for legitimate purposes.” Why, exactly? And if a woman goes into a spa and pays for a Happy Fingered Ending, is that not a crime?

–And why are you the spokesman for an investigation outside your jurisdiction you were not, by the admission of your own staff, involved in?

–With all this investigating to do, where do you find the time to write editorials for out of state newspapers?

–How did you end up with column space on The Boston Globe Op Ed page? Did they come to you?

–Are the 45- and 58-year-0ld US citizens you put out of business at Orchids victims of human sex trafficking?

–Does it bother you in any way that they all lost their jobs?

–How about the other spas that don’t finish their customers off but are also losing business? That bug you at all?

–When a place is giving Rubs & Tugs, who exactly is being harmed?

–Between us, this is all about pandering for votes, right?

–What the hell, bro?

–How do you live with yourself?

–Can I offer you a “Free Kraft” shirt?