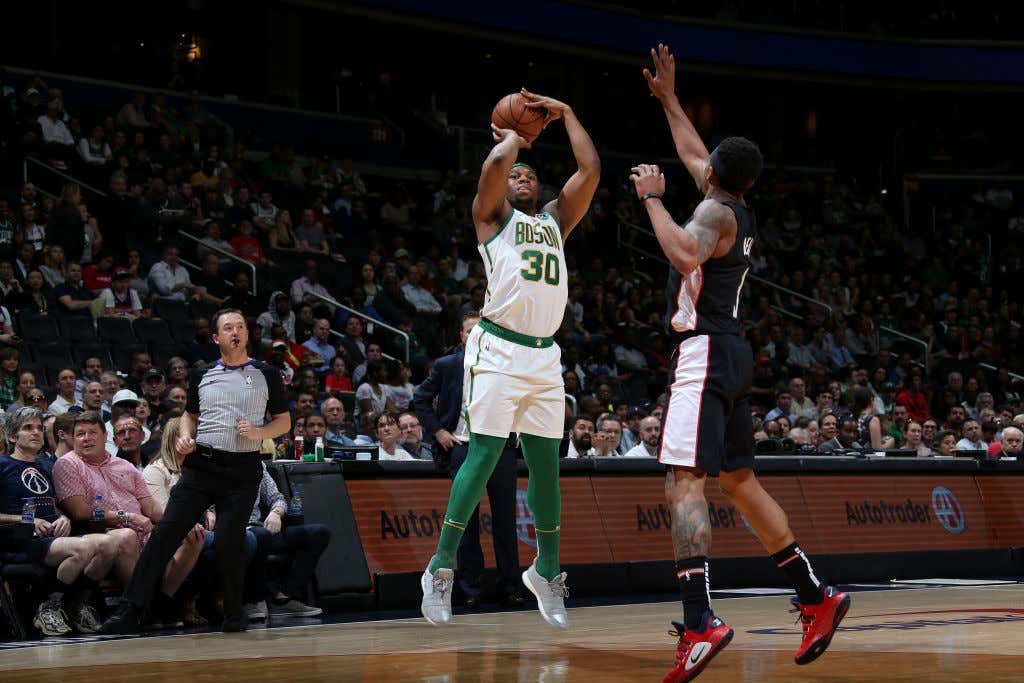 You want to know how bizarre this season was? Normally when I find myself sitting down to blog Game 82, I’m a little sad. I usually sit back and reflect how fast the season felt and it’s never a fun blog to write because it just means we’re one step closer to NBA basketball as a whole coming to an end. But this year? I feel not even an ounce of sadness. Fuck this regular season and everything that came with it. A season that started with such promise, such hope, in reality was nothing but a drama filled underachieving frustrating shitfest that tested every Celtics fan to their core. They could not have been further from the 60+ win team we thought they would be back in October, and there’s a laundry list of reasons why.

But you know what? Last night was actually fun. With nearly all of the main rotation guys out, it was an opportunity for us to see the true stars of this team finally get some real legit run and boy did they not disappoint. You have to be a real lunatic to not only watch last night’s game but also care about what you saw, and I am not ashamed to admit that I did both. I would say it’s a little poetic that a season filled with all that turmoil could end on such a hilarious high note, but really when you think about it, last night was the only way the Celtics regular season could end.

So for the last time in the regular season, let’s get to it.

– Where do you start when you have 7 players in double figures, 5 of which had at least 15 points? Duh, you know where I’m starting and if you don’t then what the hell have you been reading all these years? We’re starting with Yabu

Admit it, you just watched a guy who belongs in the NBA. Would you believe that I still get chirped about how Yabu sucks and isn’t an NBA quality player? Imagine living such a depressing life that you can’t find the joy in Yabu or see that he in fact can play at the NBA level. Pick a poison, you want to post him up great he’ll just use his big ass to get position and use post moves not seen since Hakeem The Dream to get around you and finish at the rim. You want to give him space behind the arc? Well that’s stupid because there are few big men more wet than Yabu as evidence by his 3-5 performance from deep. You give him a lane to the rim? He’ll yam it right in your eyeball so hard for a second you’ll confuse him with Shawn Kemp. There is literally nothing this man can’t do on the basketball court and his 25 minutes were a blessing from the Gods.

Oh let’s not forget his defense either. Just held Bobby Portis scoreless on 21 possessions and then Thomas Bryant to 2 points on 11 possessions. So yeah he’s basically a DPOY candidate if you gave him real minutes over the course of the year. These are scientific claims too that I can support with real evidence which makes it all the more sweet.

And yeah maybe he did have a -37 net rating but you know what who cares.

– On a night that was really more about the end of bench guys, it was nice to see two regular rotation players not only take the game seriously, but also play well against this terrible competition. Both Jaylen and Terry were solid, combining for 38 points on 14-28 shooting and the only thing that makes me nervous is Brad saw last night and may have second thoughts about his playoff rotation

It was a relief to see Jaylen didn’t play heavy minutes, just 18 on the night because if I had to deal with another extremely important rotation player getting hurt in a game that meant jack shit I would not have been a happy camper.

– While it doesn’t matter in grand scheme of things because after last night almost none of these guys will see the floor, it was nice to see a Celtics team actually fight back in the face of adversity. Getting down 21 early, they could have just mailed it in and nobody would have complained. Instead, the bench guys scratched and clawed their way back and actually showed some balls. To me that tells me perhaps there really is a culture change on this team, and I hope the regulars were paying attention. They wasted no time and came right back with a giant 38 point second quarter which was weird to watch for about a billion reasons, and then again once WSH turned a 1 point lead into a 13 point game this team did not quit. They played a nails fourth quarter to seal the win and I may or may not have shed a tear.

– Imagine being the player in that anonymous poll that called Semi overrated. What an idiot, what a fucking idiot

does that look like an overrated player to you? Didn’t think so. Brad’s favorite secret weapon, he did a little bit of everything which is perfect Semi. His outside shot’s consistency still needs a little work but it’s definitely an asset, and then defensively it was your typical shut down city

Nobody, and I mean nobody stays ready quite like Semi and you better believe he’s going to have a role in that MIL series if the Celts are fortunate enough to get there. I was happy to see Semi lead the team with 38 minutes because if there was ever a player on this roster that deserved an extensive run, it’s Semi.

– Call me crazy, but I really think Brad Wanamaker finds himself on an NBA roster next year. He took the gamble of less money this season to come over to the NBA, and who knows maybe it’s with Boston, but either way this dude is going to stick around. He’s just too solid

Now let’s not get crazy and say shit like he deserves playoff minutes or anything like that. We’re still in the business of praying every single night that Gordon Hayward is the second unit PG. But I will say this, if something crazy happens like foul trouble or an injury or something like that, my irrational brain sort of trusts Wanamaker in a break the glass type of emergency. While I don’t love his outside shot, I do love his aggressiveness and decision making and his ability to ya know, actually find teammates. I think we all agree whatever Brad does with Terry is going to be a fluid situation, and if he needs to send a message if Terry is playing like shit, would it shock anyone if he turned to Wanamaker for a shift or two?

– Ever since I ran into him at a Vegas casino lobby during Summer League, I have always been rooting for RJ Hunter to succeed. When he came back to the Celts, I was ecstatic because not only can he shoot, but he also loves being here. Well last night we were rewarded, because RJ went nuts and basically won them the game all by himself in that fourth quarter

How about a +28 in just 25 minutes? Normally I would be mad at someone who did nothing but take threes, but for RJ that’s exactly what I wanted to see from him. Bust out that smooth stroke and ask questions later. Here’s the crazy part, he actually defended too! Hunter owned the lowest Drtg of any player on the roster at 79.2 and had an overall net rating of +52.8. Those numbers just broke my goddamn brain.

If you weren’t happy to see RJ Hunter dominate this game late, well you sir are lame as hell and have a giant dump in your pants. Did this validate his draft selection all those years ago? I’m not ready to say no.

– Oh would you look at that, Timelord got some run and just finished with 11 boards and 3 blocks and a whole bunch of Timelord shit

Remember, there are those out there that believe Danny Ainge can’t draft. Silly idiots.

– And finally, a quick shoutout to PJ Dozier who like Semi played basically 38 minutes and made the most of every second

I don’t know where he ends up after this season, but he’s another guy that every time I see him play there are flashes. That dunk was great, he hit the boards well and was a positive in terms of creating for others. Maybe he bounces back between the G-League and the NBA again next year, but the kid can play there’s certainly no denying that.

– It’s hard to be too tough given this was basically an exhibition game, but the rebounding was a bit of an issue as you can expect with no Horford or Baynes on the floor. Timelord did his job, but Theis was sort of nonexistent in his 12 minutes and the 13 OREB and 15 second chance points weren’t all that great.

Add to that the perimeter defense being kinda shaky, this wasn’t exactly a defensive clinic by a majority of the guys who saw the floor.

– Am I reading this right? The Celts forced 15 TOs and only scored 6 points off them? That can’t be real. Maybe I’m reading that wrong, or at least I certainly hope so.

– I don’t want to be a prick, but once again we saw a Celtics team come out of halftime and pretty much shit themselves. Just 32/28% splits, half their FGA were from three and you had guys like Terry who played about 9 minutes in the third which is a little concerning. If it was primarily bench guys fine, but when I see Terry and Semi get real minutes during that quarter and a result like that, I can’t ignore it.

– This team went 11-23 from the FT line. If you think for a second that I would consider giving them a pass given this game didn’t mean anything well I don’t know what to tell ya. Can’t miss that many FTs, 47.8% is unacceptable I don’t care who is taking them. Sure, I accept that I may be the only person on the planet who gives a shit about this, but that is my burden in life.

– How do you sign known bucket getter Jonathan Gibson and then DNP-CD him? That was pretty ruthless by Brad in my opinion. Let the dude chuck it, what’s the worst that could have happened.

So there you have it. Finally we can wash ourselves of this disastrous regular season. I am going to have to ask each and every one of you to take multiple long piping hot showers from now until this weekend and you scrub yourself good. I don’t care how you do it, but collectively we need to wash the stink of the past 6 months off our bodies so we can be clean and ready to roll for this gigantic postseason run. No more bullshit, no more excuses, NOW things really matter.

Buckle up, because things are about to get either really awesome, or reallllllllllly bad. There is no in between.