Hopping on the old Twitter today looking to get informed on the news of the day and your number one trending topic from the political landscape?

Long story short, California Representative Devin Nunes is suing a bunch of people for writing mean things about him, including the Twitter accounts @DevinCow, which is an account tweeting from the perspective of a cow in Iowa, and @DevinNunesMom, which…well you get that one.

…The complaint also named “Devin Nunes’ Mom,” “a person who, with Twitter’s consent, hijacked Nunes’ name, falsely impersonated Nunes’ mother, and created and maintained an account on Twitter (@DevinNunesMom) for the sole purpose of attacking, defaming, disparaging and demeaning Nunes.”

Nunes lawyers’ wrote, “In her endless barrage of tweets, Devin Nunes’ Mom maliciously attacked every aspect of Nunes’ character, honesty, integrity, ethics and fitness to perform his duties as a United States Congressman.” […]

Another account named as a defendant was “Devin Nunes’ Cow,” or @DevinCow, which purportedly called Nunes a “treasonous cowpoke” and an “udder-ly worthless” criminal. The timing and substance of the tweets, according to Nunes’ team, suggested that Mair was working jointly with @DevinCow and @DevinNunesMom accounts. (source)

…In a March story, the McClatchy DC Bureau reported that Nunes’ previous lawsuit against Twitter and some of its users had only “amplified” the visibility of his critics and the Internet trolls — including one named “Devin Nunes’ Cow.” Fox News is told Mair has not yet received service of process, including an official copy of Nunes’ complaint, in either litigation.

Most specifically, he’s upset about this article by Mackenzie Mays in the Fresno Bee saying a winery he owns had cocaine and prostitutes on a cruise they auctioned off for charity: 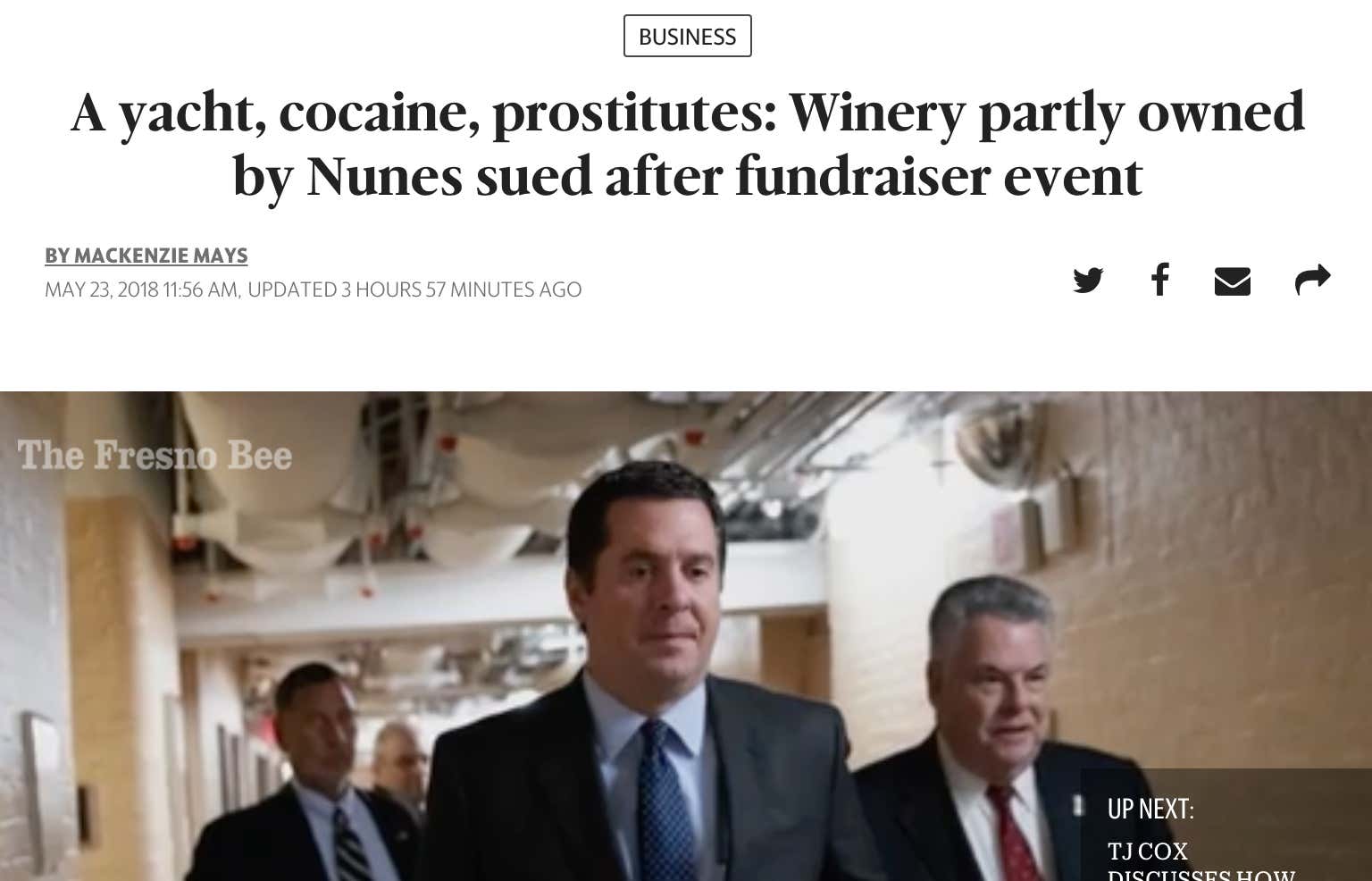 Nunes filed a criminal complaint because Mays put “woman” “Devin” and “cocaine” in bold to emphasize them and make him look extra bad and defame him…except it’s pretty obvious to anyone who has used Twitter before that the words were bold because those were the keywords the lawyers searched for. You can’t actually bold words on Twitter.

Nunes’ complaint, filed on Monday, accused Mays of “chos[ing] to emphasize the words ‘woman,’ ‘Devin’ and ‘cocaine'” in her tweet. But those three words appear bolded only in the embedded tweet included in Nunes’ complaint — as they would if a keyword search were performed on Twitter for the words “woman,” “Devin,” and “cocaine.”

As you can see, the words aren’t actually impossibly bolded in the real life tweet:

They’ve since dropped that part of the complaint.