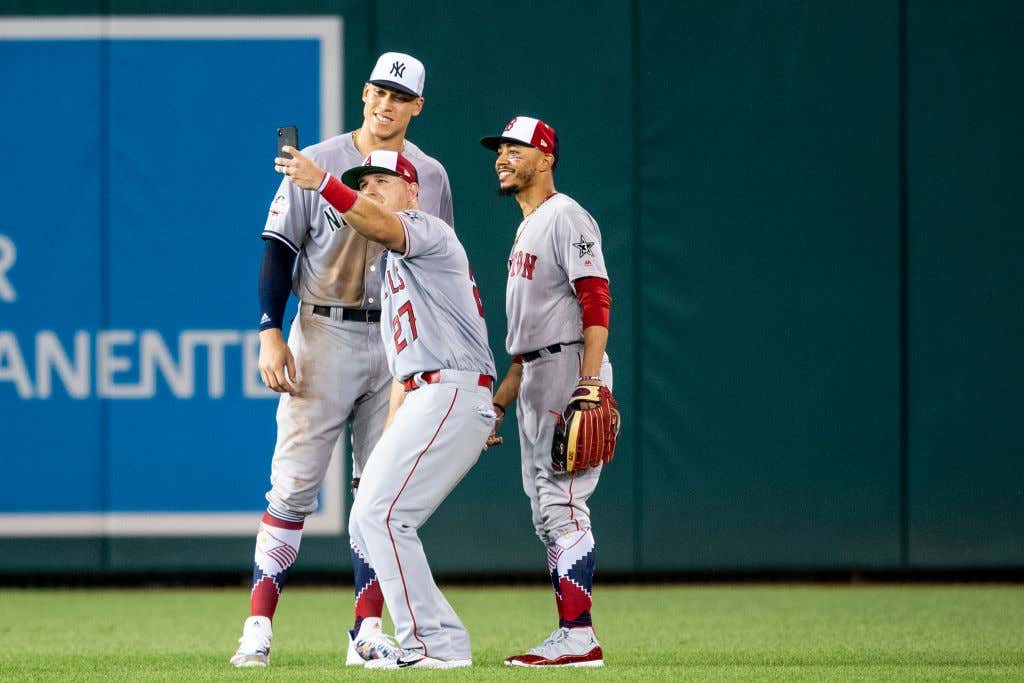 The New York Times – What if there were a statistic as easy to understand as batting average that accounted for the things that batting average does not? Well, there is: It’s called secondary average, and it was invented by the influential statistician Bill James.

Secondary average looks and works a lot like batting average does. But rather than focusing on hit totals, it adds up the batter’s other offensive skills — extra bases, walks and stolen bases — and then divides by at-bats.

I encourage you to check out the full article if you haven’t maxed out your free monthly subscription yet. It’s got some great observations I sum up at the end but for now you need to know there’s more substantive proof that Mike Trout is the greatest baseball player alive.

More specifically we’ll be looking at Secondary Average defined as

a sabermetric measurement of hitting performance that seeks to evaluate the number of bases a player gained independent of batting average.

That sounds more confusing than it really is. In simpler terms we’re looking at offensive value when you take away singles… it’s a measure of getting the extra base. To best understand the concept let’s first talk about Total Bases.

Secondary average leans heavily on total bases just like slugging percentage with a few basic adjustments to basically strip out the impact of batting average to assess a broader level of offensive value. Back to the article:

Let’s use Dee Gordon of the Seattle Mariners as an example. He had a .268 batting average last season, 20 points higher than the league average (.248). But his secondary average was a mere .151 because he had very few extra-base hits and even fewer walks. Here’s how it works 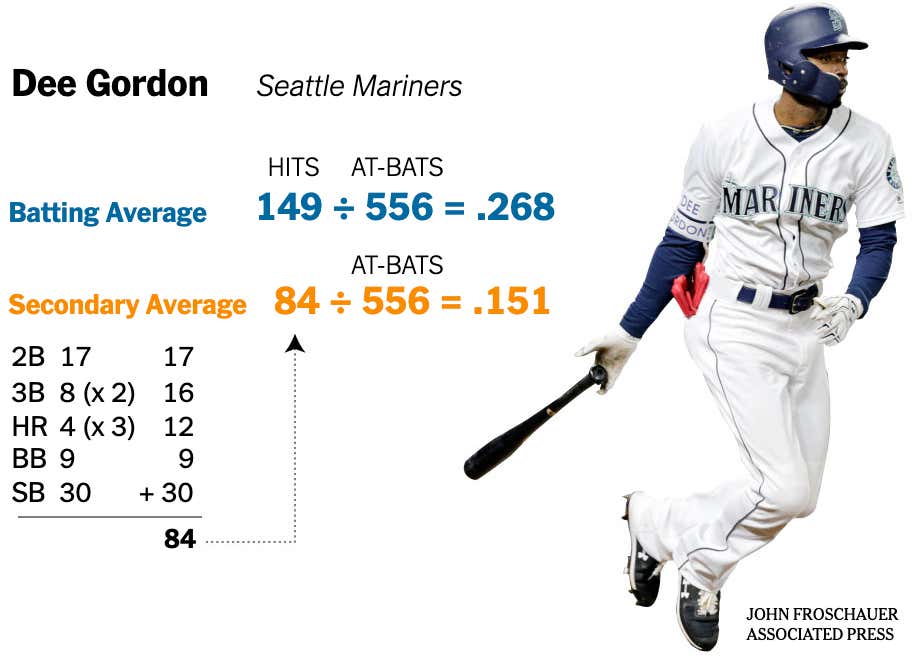 You’ll notice Dee Gordon gets no credit for singles with each XBH being worth (TB-1) so a double is worth 1, triple 2, etc. And then of course a point awarded to each BB and SB because in the eyes of sabermetrics, an offensive player can only achieve those outcomes by taking them from the other team. So they’re considered Extra in general baseball-stat theory. Let’s get back to the Times article for more context:

It looks and works a lot like batting average: .300 is good, and .200 is not. Major leaguers collectively had a .248 batting average last season, and their overall secondary average was .271.

One difference is that the spectrum is much wider. While almost every player falls into the .200s or .300s in batting average, there are plenty of regular major leaguers with secondary averages in the .100s, and others over .400 or even .500.

I like the wider spectrum of results because it gives a bigger basis of comparison. The difference between .500 and .150 is much more real than comparing batting averages. We already see this now with OPS where routine outcomes on a single roster can often range from .650-.950. And with that comes much more validity and confidence in comparing different players. That’s a good thing.

The other great thing is you can use secondary average alongside batting average to see who is getting the most out of their offensive opportunities. 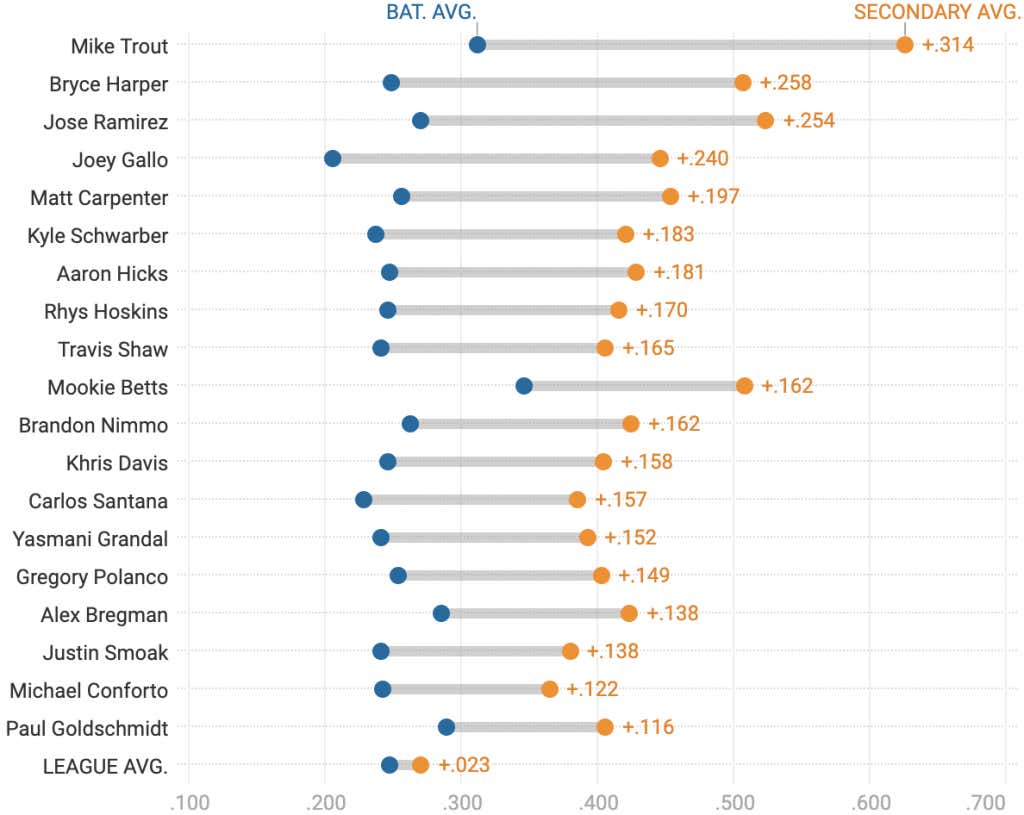 Immediate observation is that even tho Mike Trout finished 5th in 2018 with a .312 average, he still has the biggest gap between his secondary average and batting average. One word: INSANE.

A majority of the leaders listed have averages below .250 because there’s an inherent trade off between Total Bases and Batting Average. The more you go for, the lest likely you are to get anything. See: Joey Gallo, Khris Davis, Kyle Schwarber etc. So the fact Mike Trout is on this list much less leading it by a wide margin is fucking incredible.

At the other end, it reveals how some players, like Gordon, bring little beyond an ability to hit singles: 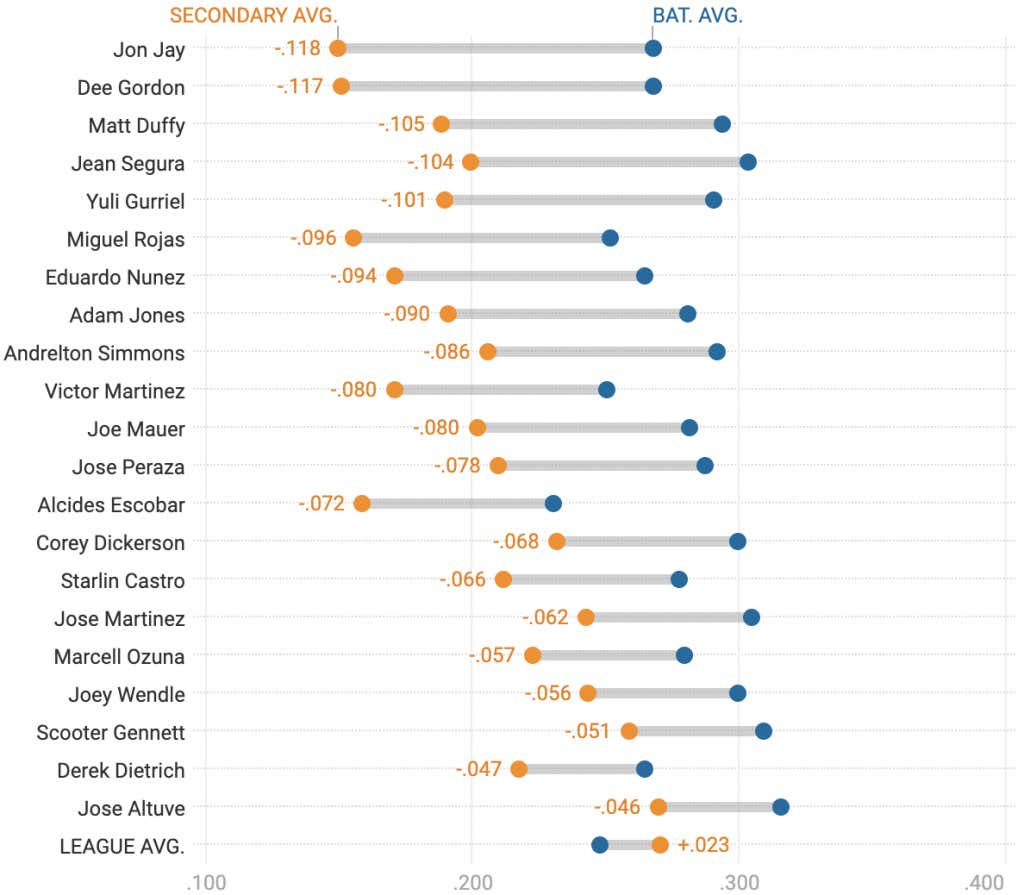 6 of the bottom 20 have batting averages over .300 which just goes to show you how much else we have going on. Yes, Jean Segura’s .304 batting average is awesome for an everyday shortstop. But when you factor his inability to walk coupled with just 42 extra base hits, it’s clear he’s more average than he is remarkable, which is exactly what a .304 batting average represents.

Another good example is Jose Altuve – his total bases plummeted last year leading to almost a full 100 point drop in slugging while stealing about 40% less bases. As a result his secondary average drops to league average despite hitting .316.

And then finally back to Mike Trout. The point of this statistic is to identify guys like Kyle Schwarber, Brandon Nimmo, Justin Smoak, etc. as the players that do a lot more than their average suggests. And even then Mike Trout can’t stop flexing on everyone because he’s literally the perfect baseball player. Like this wasn’t even about him and it ends up being entirely about just how good he is: 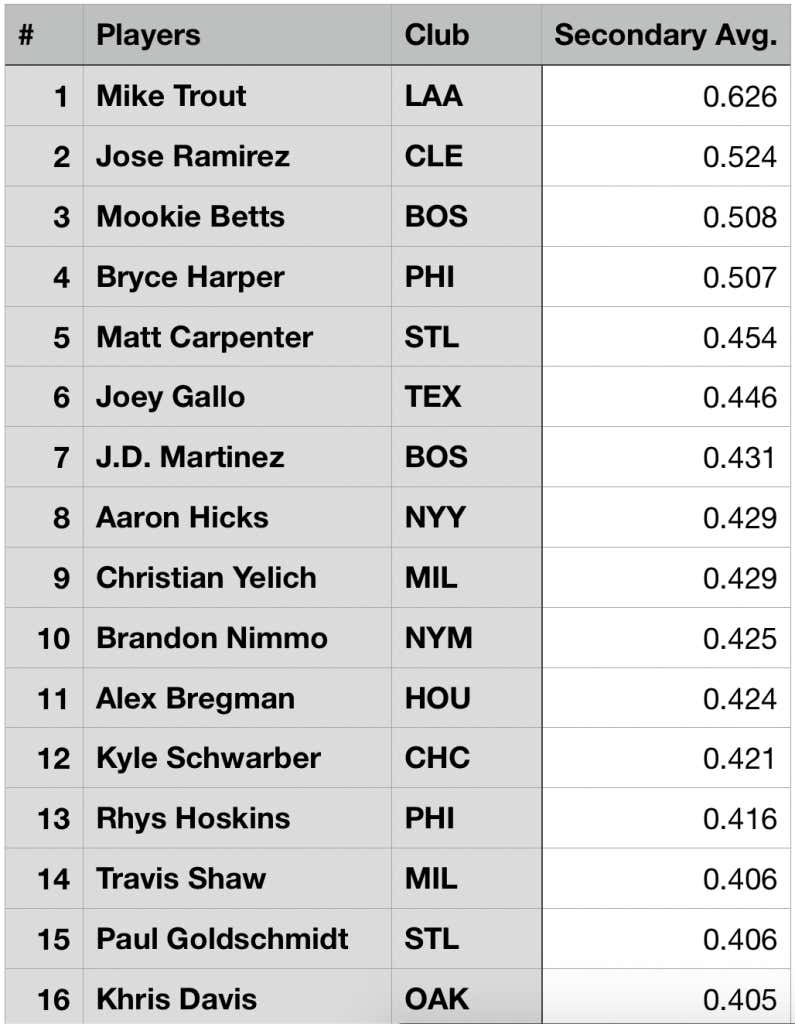 I know it’s a great time to be alive because indoor plumbing and modern medicine and all that shit. But what puts 2019 over the top for me is getting to watch Mike Trout every single day. I said it before I’ll say it again, he’s the best ever.