Alright, so the UN says North Koreans live under “systematic, widespread and gross human rights violations” where the government controls all media & the lives of its citizens. And maybe there’s the whole ‘forced labor camps with an estimated 80 – 120K prisoners’ thing. And perhaps they dabble in some nuclear, chemical and biological weapons that makes everyone a little nervous, too… But I gotta say, it looks like North Korea threw a pretty kewl marathon this weekend.

North Korea’s Pyongyang marathon may be among the most complicated to enter but an easing of tensions on the Korean peninsula has made it a stage to highlight the power of sport amid growing interest for the race.

Athletes can only register through one operator, Koryo Tours, for a chance to run through the capital of the reclusive state in the Mangyongdae Prize International Marathon, as the race is officially known.

But close to 1,000 foreigners — several hundred more than last year — signed up in the sixth year foreign runners are allowed to compete on Sunday, according to officials, as tensions between North Korea and South Korea have eased since 2018.

Among those running were two Olympians — retired Swiss freestyle skier Mirjam Jaeger and British snowboarder Aimee Fuller — who are part of a documentary produced by the Olympic Channel on the Pyongyang marathon and the pair’s experience of the local sports culture.

“The start (in Kim Il Sung Stadium) was very busy, the stadium completely full,” Fuller, who took part in the 2014 and 2018 winter Olympics, told Reuters in a telephone interview from the North Korean capital.

“It felt as if we were on a world stage competition. That was completely surreal. It was like the Olympics in an Olympic stadium.”

“Around mile 13 it definitely started to thin out. Having that unique opportunity to move from Pyongyang out into the countryside was really surreal.”

Surreal indeed. Worth noting – despite runners from around the globe joining in on this race, you cannot run it if you’re American since we have a tourist ban there. Quick recap on why that is from USA Today:

…As the group prepared to leave in early 2016, the University of Virginia student was charged and convicted of engaging in anti-state activity for stealing a propaganda banner from his hotel. Much remains unknown about what happened to him in North Korea, but Otto Warmbier reportedly had been in a coma for more than a year, and brains scans since his return showed severe damage. Warmbier’s parents said in a statement Monday that “the awful tortuous mistreatment our son received … ensured that no other outcome was possible beyond the sad one we experienced today.” They found one small comfort: “He was at peace. He was home and we believe he could sense that.”

I know the big picture is more complicated than I understand, and I think it’s important to keep the lines of communication open and sports is a great way to do that, but knowing the human rights record it felt very weird to see tweets like this:

“Atmosphere in the stadium was great,” says guy who probably knows full well it was mandated the stadium be filled with cheery, happy people in matching outfits waving matching gold-paper megaphones as they sat through a marathon, two soccer games, & a medal ceremony for optics.

Overall things seem to have gone off without a hitch and a North Korean runner came in 1st place because he was a great runner (and/or runners from other countries are terrified to see what would happen if they won instead).

Maybe I’ve read too much and I’m being too skeptical of the whole thing as the race continues to grow each year. Still, I like to think I’m up for almost any adventure, but that being said even if I had the chance I’m not sure I’d go. (Partly because of the politics, but also because I haven’t run in awhile now & would be concerned about chafing my nipples off.) Crazy runner people, would you go if you had the opportunity? 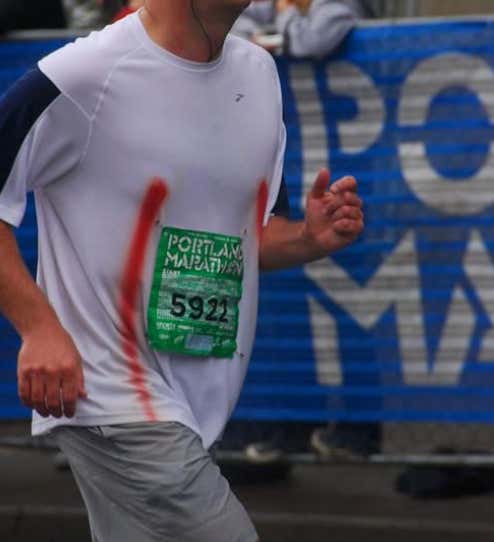