Quick timeline of events to catch you up if you’re behind:

1) 3 days ago, Busted Coverage puts up a blog about Virginia’s Kyle Guy’s wedding registry, then is asked by UVA to take the post down.

2) Kyle gives an interview with reporters confirming the story (blogged by Reags). 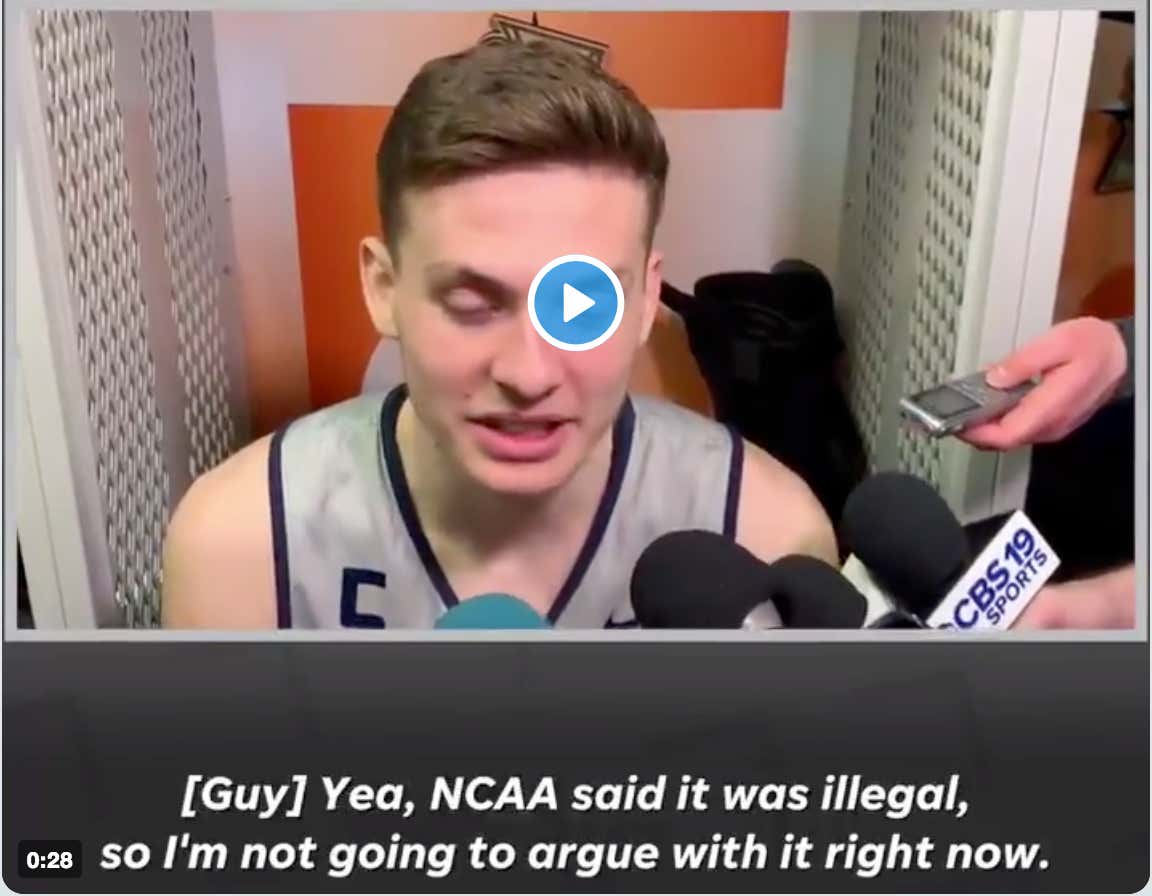 3) Reporters asked notorious good, common-sense having guy Mark Emmert about the situation and he is absolutely flabbergasted anyone would think the NCAA would do that. 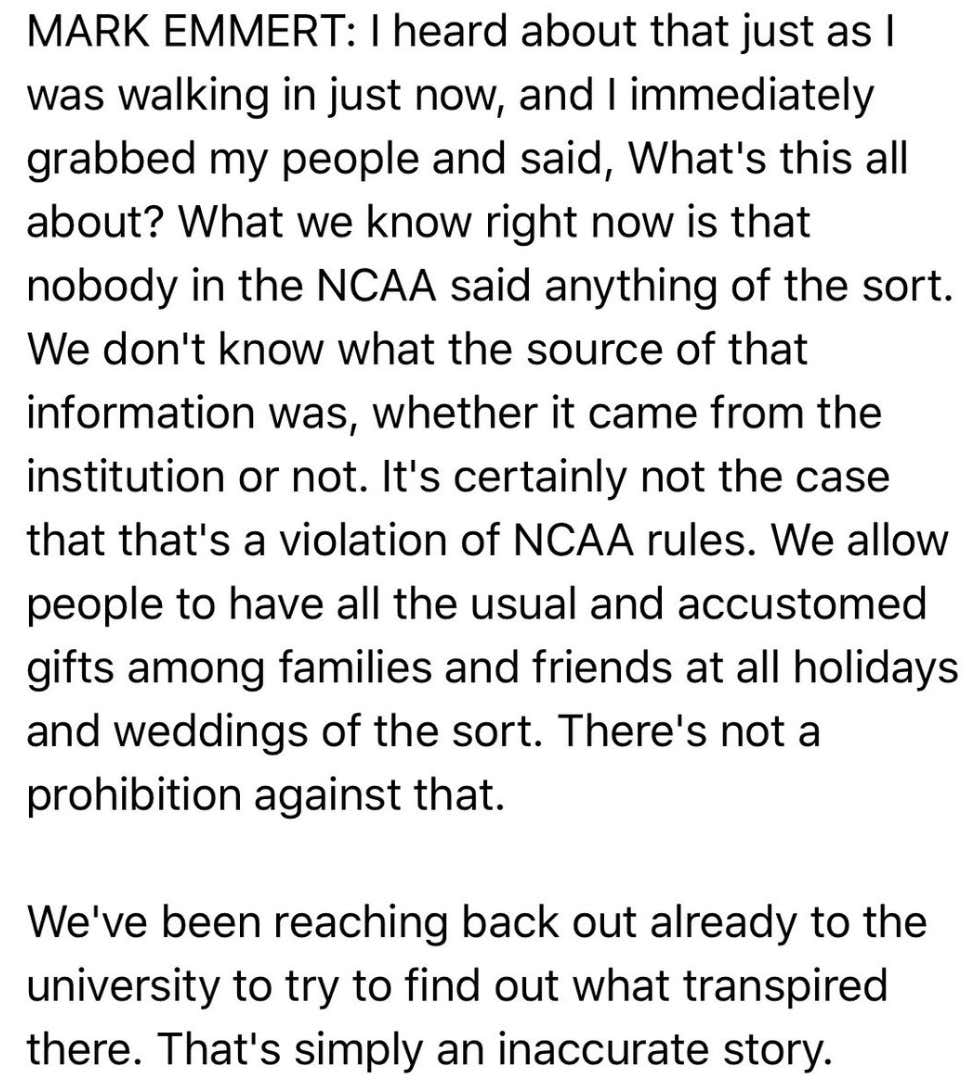 Emmert was right – it didn’t come from the NCAA.

It came from Virginia, a college with a D1 sports program that is part of Mark Emmert’s NCAA and for some reason – don’t ask me why –  felt they needed to take these steps with the registry.

So now – it’s all good.  The registry is up and the toaster ovens and food processors are rolling in (people are such assholes that put food processors and shit like that on their wedding registry.  I know why that $459.95 espresso maker from Williams-Sonoma is on there, Jenna.  You know I won’t buy it, but you know I know someone WILL buy it, so it guilts me into bumping up my spend.  Jenna isn’t a real person but it’s a pseudonym for like 13 real girls at this point.  And that is why I always end up buying the 2nd most expensive thing on the registry.)

“Once again, love conquers all” in Mark Emmert’s NCAA, just like it always does!

Except for when it took that car away from that UCLA girl who won the halftime contest.

Or when they shut down that GoFundMe for the Tennessee State player with life-threatening injuries.

Or when they prevented that Hurricane Florence fundraiser game.

Or when they suspended those soccer players for playing a pickup game with the Foo Fighters.

Or when they ruled the Auburn walk-on ineligible for using CBD to treat his constant seizures.

Or when Emmert sat on 37 (yes 37) reports of sexual assault at Michigan State for 8 years.

Or when they did the 15 other things mentioned in that link above, like punish/ban/rule ineligible:

Those are all real.  Seriously, hit the link – they’re all in there, with the original articles.

And there are so many more.  Soooo many more.  I just screenshotted them because I got too tired of hyperlinking – if you search “NCAA” in our search bar and narrow it down to Kmarko, they’re all in there.  And that’s not even taking into account Reags.

And this is just a PORTION. 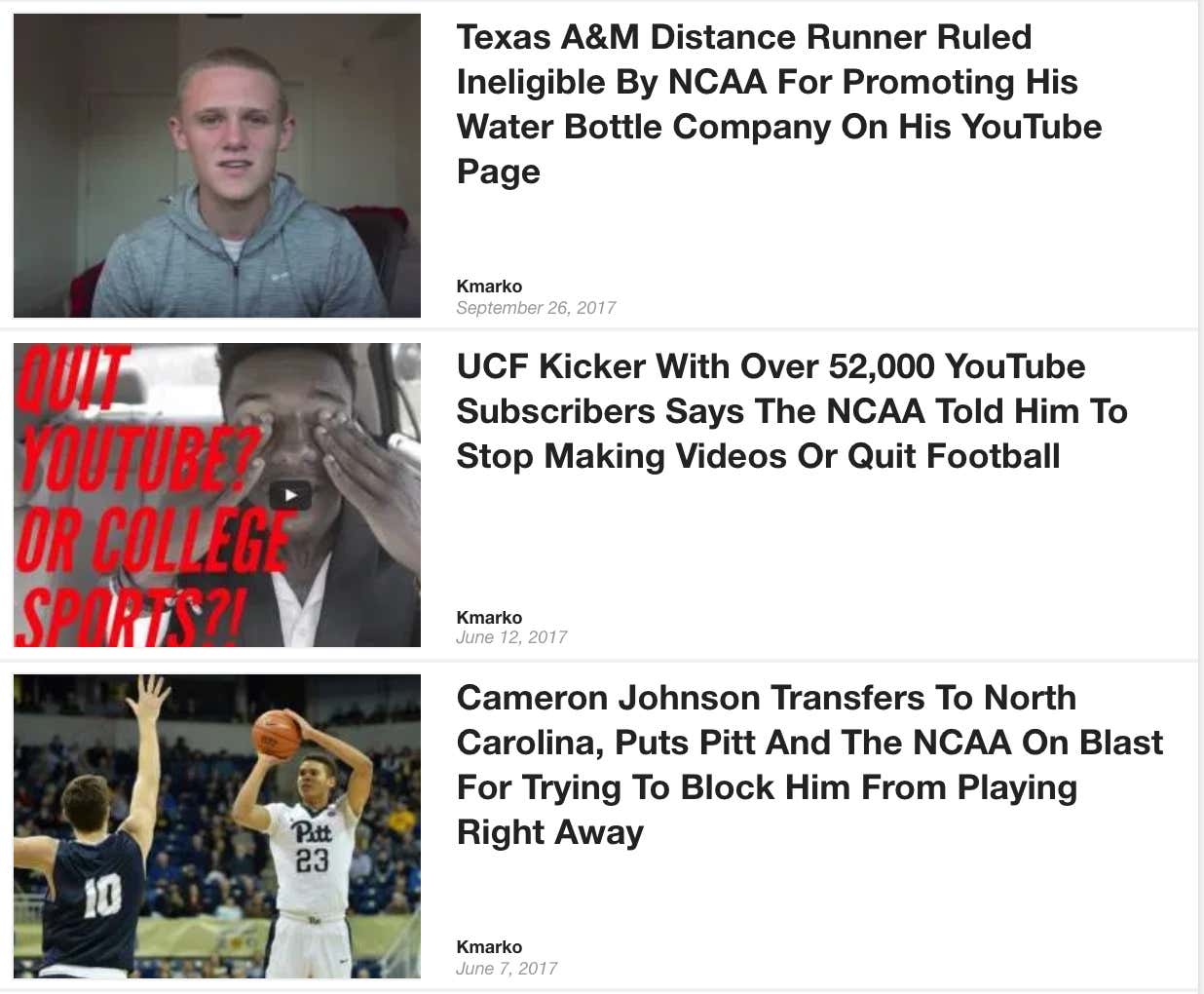 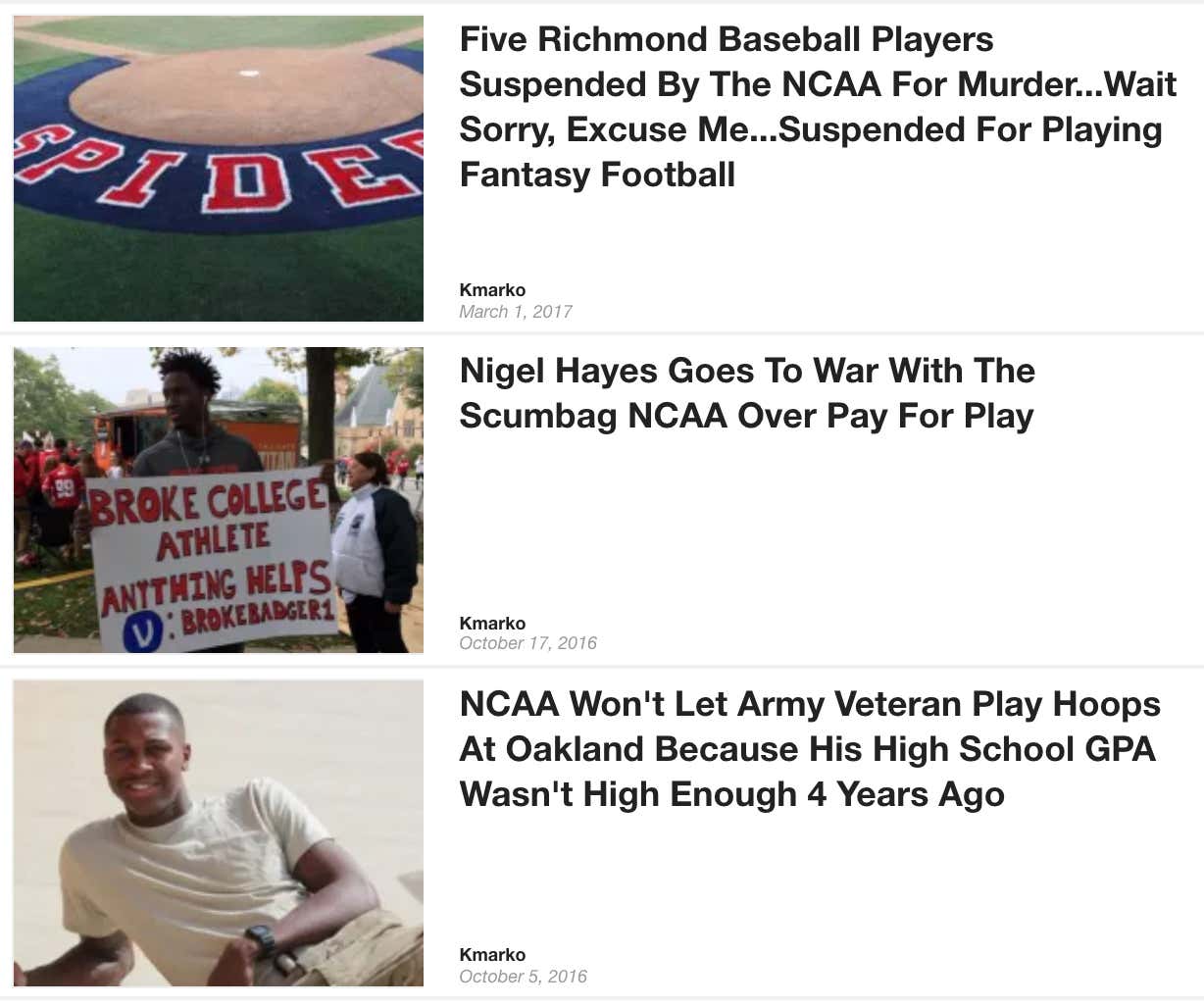 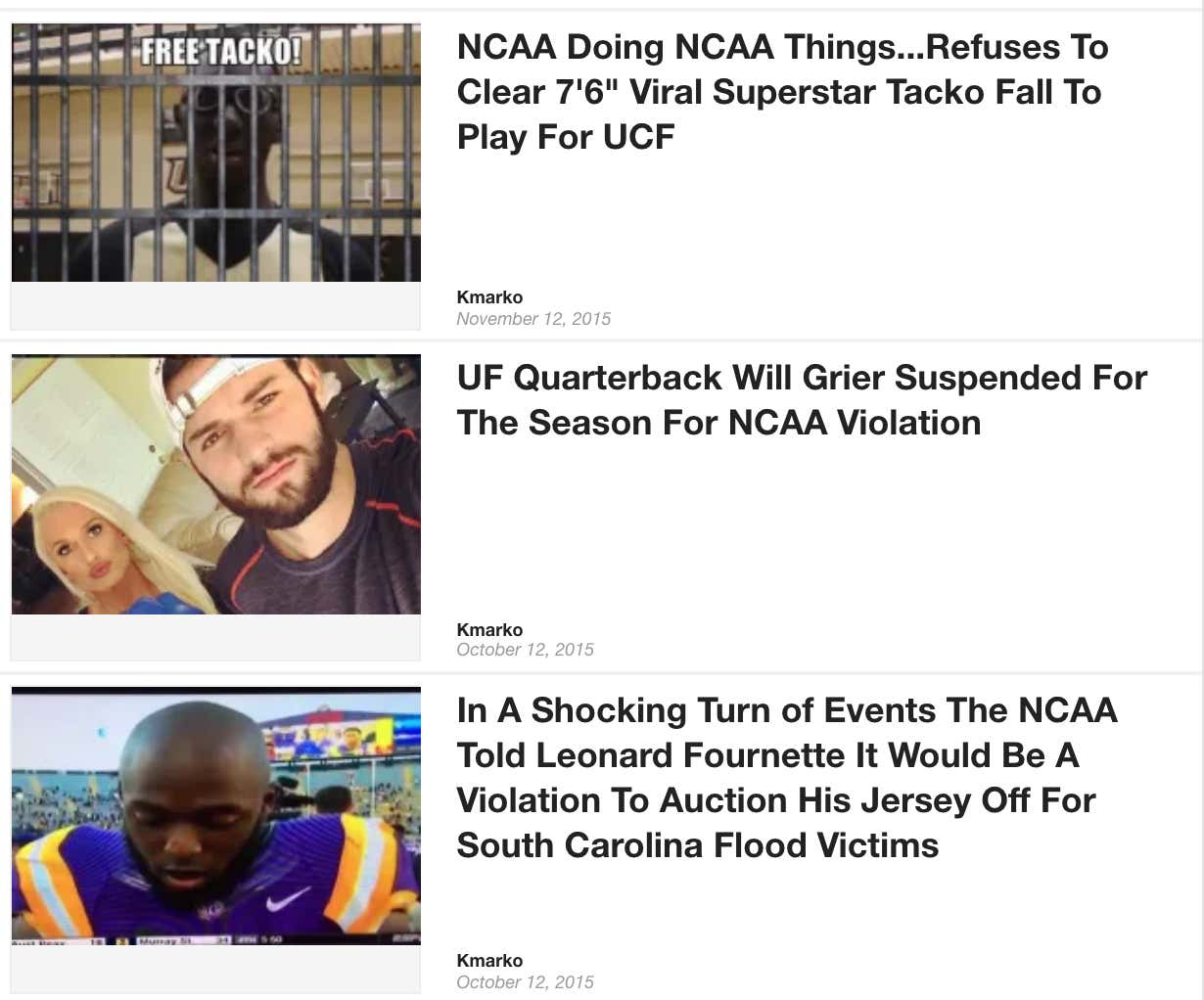 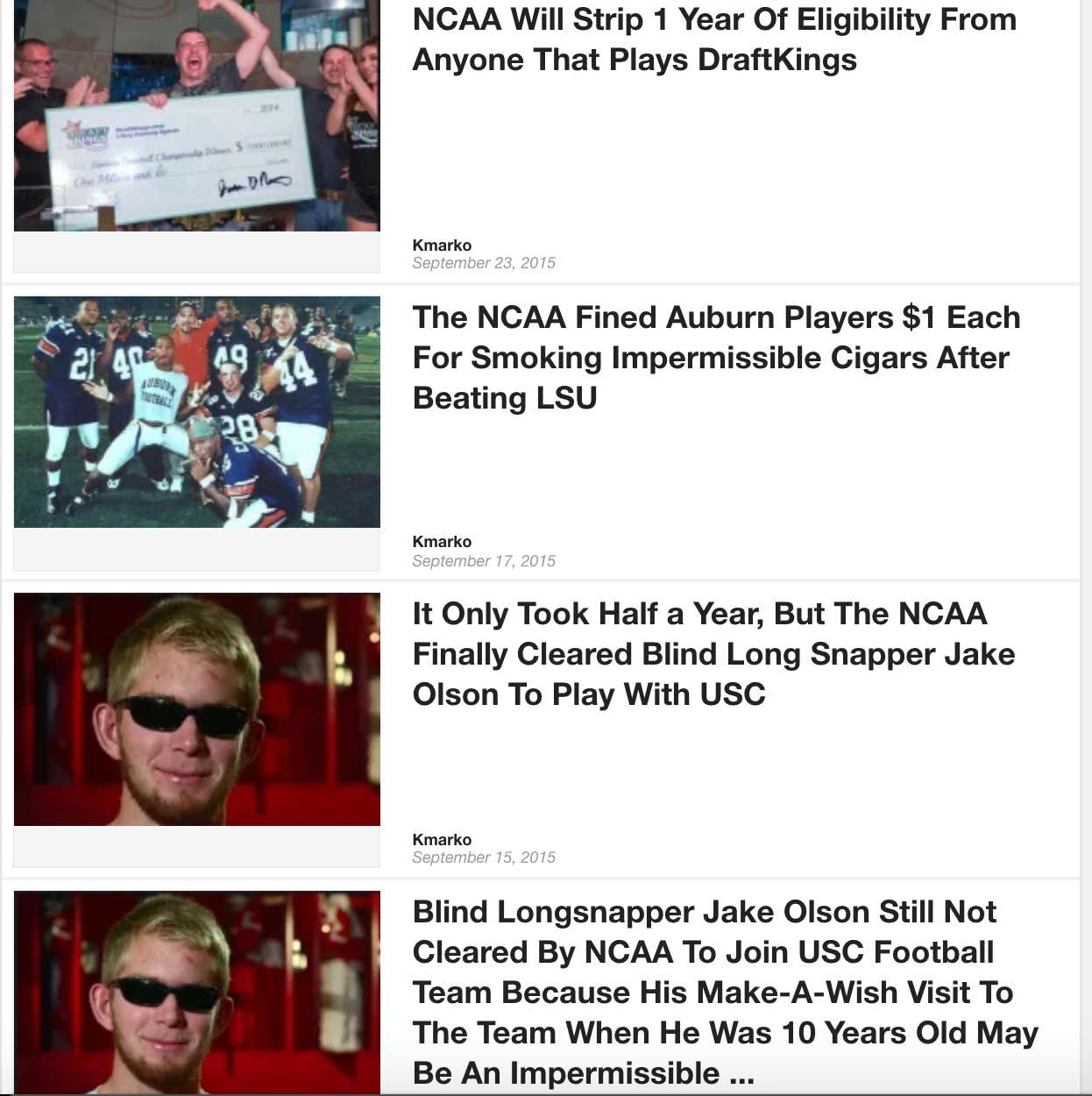 Anyway, the point is:  Virginia, I get it.