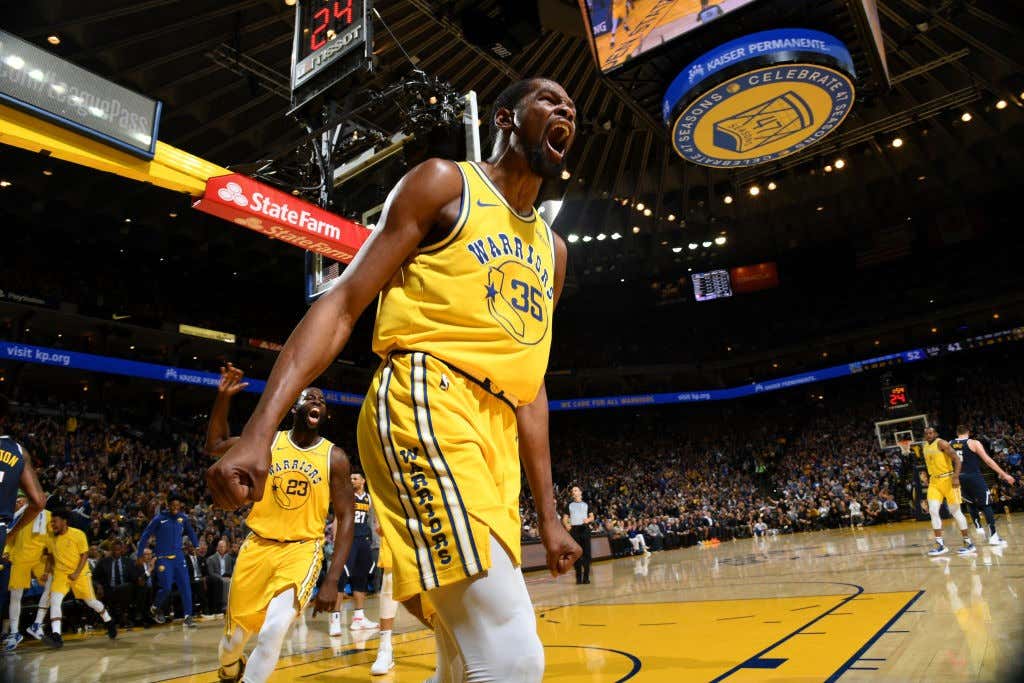 Good morning everybody happy Wednesday and welcome back to another edition of Last Night In The NBA where we bring you up to speed on everything that went down from the night before in the Association. It was a relatively light night on the schedule with just four games, but each and every one had big time playoff implications and we got some rare NBA history along the way so overall it was another great night of basketball. We’re only down to a handful of games left in the 2018-19 regular season and then  things get really crazy, but before we look ahead we should first talk about what we saw last night. If you missed the action, here’s what happened

Let’s face it, if the Thunder do not want to see their season end early, they need to get out of the 8 spot. That’s why every game for them the rest of the way is pretty much a win out situation. After not playing all that great over their last 10 (3-7), you would have thought that going up against the now tanking Lakers that this would have been an easy win, only it was the exact opposite. This was a 4 point game at the half, and it took a big third quarter to finally pull away and avoid what would have been a catastrophic loss. The story as I’m sure you’ve heard was Westbrook going full Wilt with only the second 20-20-20 performance in NBA history. That line is so ridiculous it felt weird even typing out

but thankfully he didn’t have to do it himself, with Paul George and Jerami Grant both helping carry the load as well

We finally saw this team get back to playing some decent defense which while it was against the Lakers is something OKC just has to start showing if they want to go deep, the only problem the West is so good everyone around them is also winning, so as of today they’re still stuck in that 8 spot. This is something that literally could come down to the last game of the year.

For LAL, they made 16 3PM which was nice for them, but other than that this is a broken team that should have started this path months ago. Maybe the worst tanking terrible team in league history

I take no pleasure by watching them fail and by no pleasure I mean a great amount of pleasure.

Ok, so there may have been some funny business to end this game by the Hawks. They had a huge run in the third to actually take a 4 point lead into the fourth, and this was a four point game with about 4 minutes left. But then they pulled their starters in what was 100% a tank move. So blatant you have to respect it. Why did they do it? Well currently they’re in 5th in the lottery standings and probably didn’t want to be passed by MEM and DAL. Listen that’s today’s NAB whether you like it or not, and the Hawks actually play hard so I don’t hate them for it.

I want them to get as high as they can so that Zion ultimately ends up there, and if openly tanking is what you have to do then so be it. That’s life.

For SA, they should send them a thank you fruit basket or something, especially considering it kept the Spurs out of being stuck playing the Warriors in the first round. That’s a tank that had multiple layers. Not just helping themselves, but helping others. I’m not sure they needed it with their 52/46% splits and great play from basically everyone who stepped on the floor

They remain 2 full games behind LAC for the 6th spot and neck and neck with OKC for the 7/8. They may not be fortunate enough to play a team like ATL that’s willing to blatantly throw an outcome, so their finish is going to be wild.

Did you know the Rockets are something stupid like 31-1 when Paul has 10+ assists like he did last night. You basically will not beat them if he reaches that number. You combine that with another ridiculous Harden offensive performance where he goes 12-19, and well yeah that’s how you get your ass blown the fuck out

Here’s where things get a little interesting. The Rockets only trail DEN by 1.5 games for that top 2 seed, they’ve won 3 in a row and are 8-2 over their last 10. There’s a very real possibility they could not only stay out of playing the Warriors until the conference finals, but that they could also end up having home court all the way through that series. Now POR is right on their heels, just 0.5 games back of the 3 seed, but with 4 games to go and DEN sliding a little bit, we could see HOU finish with that top 2 seed which in my opinion would make it VERY hard to keep the MVP out of Harden’s hands. Their start ending in a top 2 seed in the West? That would be wild.

For SAC, it was basically Buddy Hield and Bagley and nobody else. Not much to see here

All year the Nuggets have been like that annoying little brother that wants to prove they can hang with the big boys. Well, GS has now won the season series 3-1, has the inside position to then top overall seed, and last night was a reminder that DEN still has a ways to go. They came out and shot just 37/23% which isn’t going to get it done, they turned it over 15 times and outside of the first quarter, this wasn’t all that close.

But for GS, what we learned is that when they hit this certain level, not even a team that was one of the best in the league all year stands a chance

There’s just too much firepower to have to deal with. Even on a night where they turn the ball over 24 times, something that usually kills a team, they come out and shoot 54% and it doesn’t even matter. I don’t know who guards Durant, Steph and Klay weren’t even all that deadly, but none of it matters. They’re too deep, Boogie is a problem, and even their bench came out pretty much dominated. No wonder everyone wants to avoid this team at all costs.

and got himself ejected. Think about that, the Warriors didn’t have Durant for basically an entire half and it made no difference, they still scored 57 points over the final 24 minutes. That seems fair.

And that’s it! You’re now all caught up with everything that went down last night in the NBA. We’re back tonight with 12 games so a full slate, and as always I hope this helped you kill some time this morning. Have a great Wednesday!