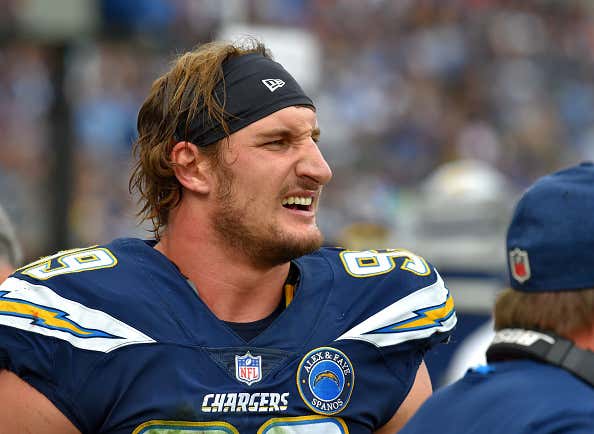 Just to put all the obvious assumptions to bed, I caught Ian Rapoport on NFL Network earlier and he insists this is not an April Fool’s gag and he does have a source confirming that yes, Joey Bosa is going to be on “Game of Thrones.” He doesn’t watch the show and has no idea what Bosa’s role is going to be. Whether he’s going to have a speaking role like Ed Sheeren did:

… or masked and unrecognizable like Daniel Craig in “The Force Awakens”:

… or whether he’ll just be an extra who has no impact on the story whatsoever, like he did in the AFC Divisional round playoff game:

Regardless, good for Bosa. I think it says a lot about how huge pro football is that a guy – admittedly a very good player – on a team with virtually no fan base can get a role in what is nothing less than the most anticipated season in the history of television.

The thing is, Bosa has always struck me as a pretty cool, genuine guy who’ll appreciate the opportunity. So I’ll be looking forward to seeing spotting him, whether he’s a Maester, Ramsey’s replacement as head of House Bolton or just Lannister Soldier #27 who takes a spear through the heart.

It all just begs the question though, how a guy like him lands a gig like this. Especially with every actor in Hollywood dying for a part in this. Not to mention a league filled with shameless, attention-starved publicity whores. JJ Watt would walk naked through King’s Landing in front of Shame Bell Lady. Antonio Brown would give a month’s pay just to get killed by the Mountain. Hell, Jeff Fisher’s not doing anything. He’d happily play one of Littlefinger’s (RIP) brothel workers just to have people mentioning his name.

So give credit to Bosa and his agent, I guess. Now somebody get Gronk a part as one of the White Walker’s giants. That’s perfect casting.