TDB – Remember Baked Alaska, the alt-right memelord who got pepper-sprayed in Charlottesville and memorably cried out for milk? Now he tells me he’s ditching the alt-right, which he says has ruined his life.

Alaska — real name Timothy Gionet — called me last week from Phoenix, where he’s living after watching his internet fameball career crash and burn along with the rest of his racist movement.

“It’s been a pretty big disaster, to be honest,” Gionet said. “It’s been terrible for my employment opportunities, my reputation. It’s ruined lifelong friendships, it’s ruined relationships with family. It’s hurt my soul.”

Now Gionet is trying to pivot away from the alt-right, making a video about how the New Zealand shooter was radicalized by right-wing internet memes. And he’s reinventing himself as a fan of Andrew Yang, the Democratic presidential hopeful beloved by 4Chan. He’s even made a rap about it.

Things you hate to see: Neo-Nazi “Baked Alaska” losing all his job opportunities and friendships and self-respect for being a neo-Nazi.

And you thought getting bear maced was the low point. 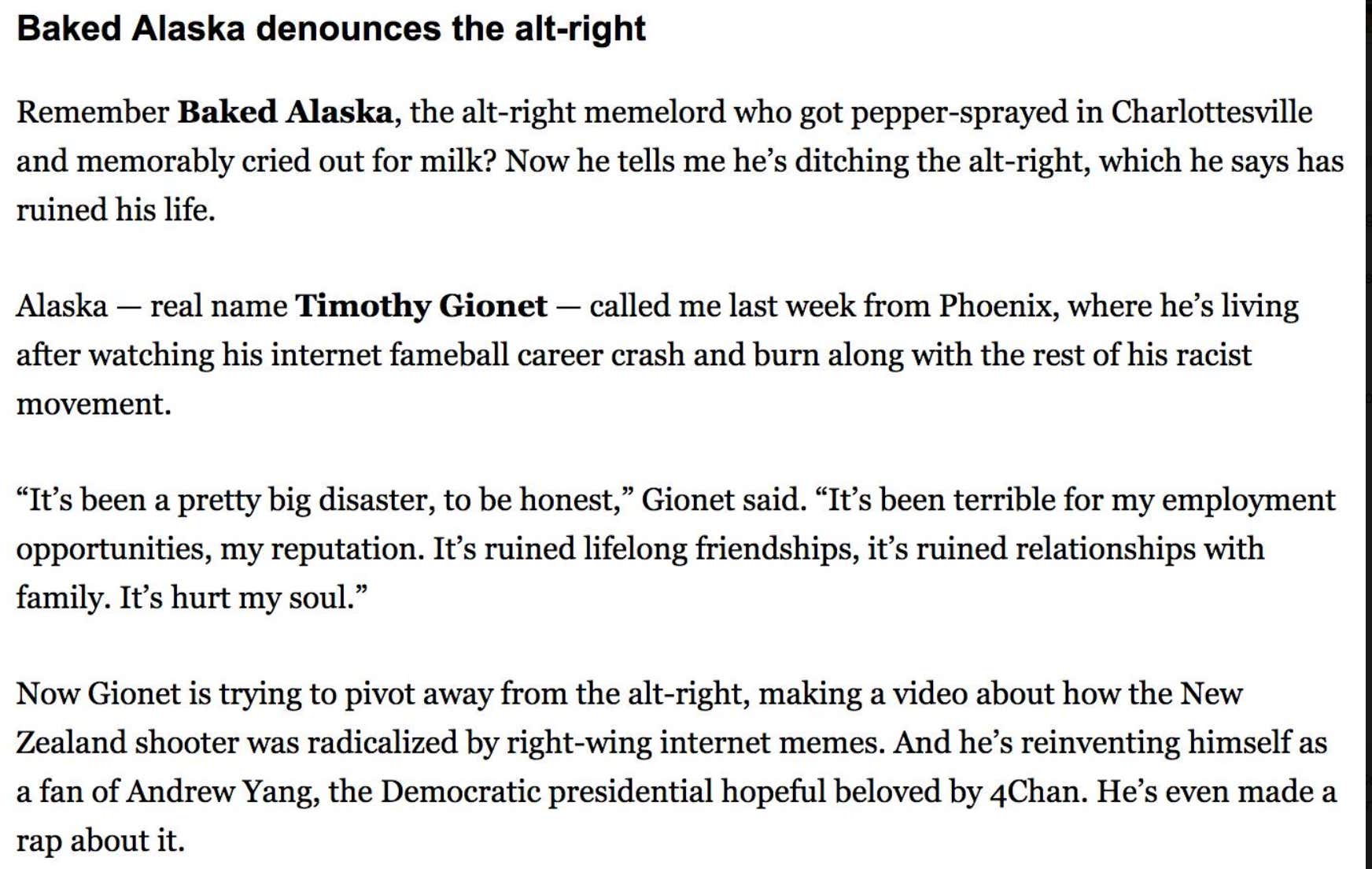 Gionet, who claims that he sees “normie-tier conservatives” being radicalized to the far-right on social media, says he wants to warn other people away from being recruited to white supremacist groups through memes and “ironic” racism.

“I really thought this was just fun memes and jokes and edgy 4Chan posting and all this stuff, and then you get to the end of this rabbit hole and you realize these guys are serious,” Gionet said.

Gionet has restyled himself plenty of times before this, going from a novelty rapper to a Buzzfeed employee to the court jester of the white supremacist movement. His claims that he didn’t realize what he was getting into are a stretch — by the time he was marching with neo-Nazis in Charlottesville and posting gas chambers memes on Twitter, Gionet was in his late 20’s.

It’s unclear whether his conversion is genuine, or whether anyone should care about it. In the end, the fact that Gionet is jumping ship on the alt-right may be most interesting for what it says about the alt-right’s declining fortunes.

Kids, this is a valuable lesson: if you spend years of your adult life creating Holocaust memes and tweeting “oven” jokes at Jewish people on the internet…you will find it tough to retain friendships and be employable and have any sort of respect in life whatsoever.

And you will need so, so, so much milk.

If you need a refresher…the “best” of Baked Alaska.