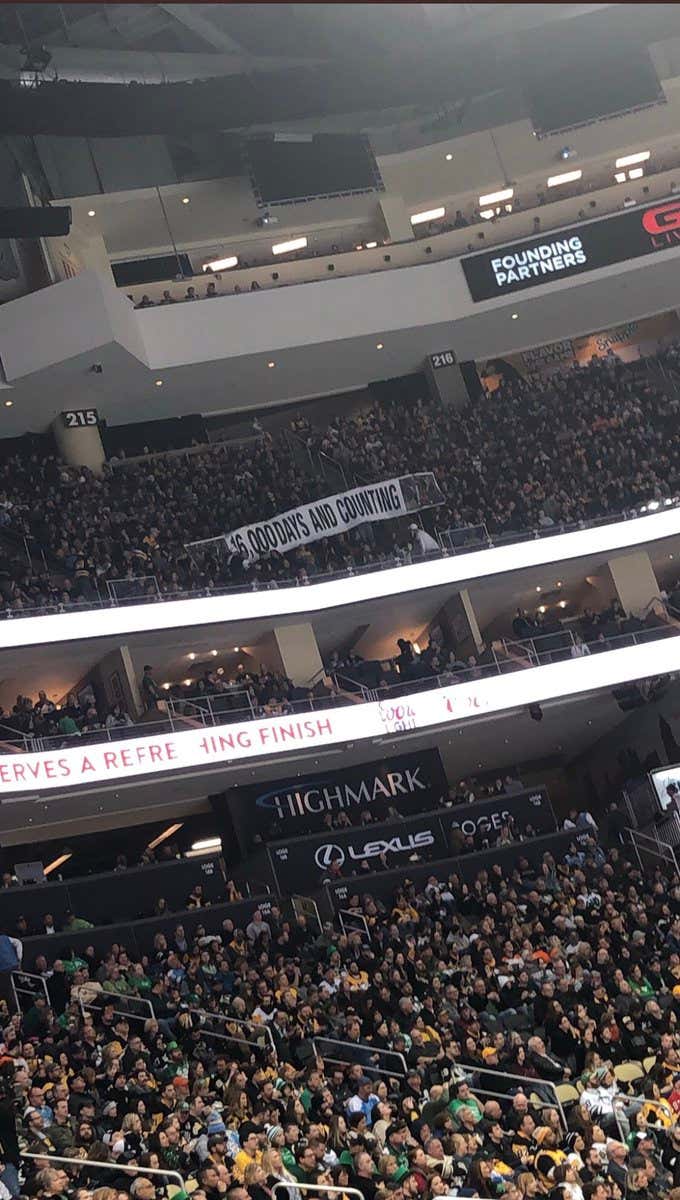 A few days ago, Grinnelli wrote a blog asking the question “Are Penguins fans the luckiest hockey fans in the world?“. The answer to that question is absolutely yes. But the only issue is that not only do they not deserve it, but they are completely wasting their incredible fortune on caring more about trolling Philly fans than they do supporting their own team.

A lot of people on the internet just assume that I am a biased Philly homer. But that couldn’t be further from the truth. I love the Flyers, sure, but my love for the game in general is first and foremost. Which is why I’m always willing to give credit where credit is due. And all the credit in the world goes out to the Pittsburgh Penguins and their ability to put together absolutely dominant teams for stretches. And all the credit in the world goes out to a player like Sidney Crosby who, up until last night, was the best hockey player on the planet. He is a 3x Stanley Cup Champion. He is a 2x Olympic gold medalist. He is a World Cup of Hockey gold medalist. He has won at the IIHF World Junior Championships as well as the IIHF World Championship. A 2x Conn Smythe winner. A 2x Hart Trophy winner. A 2x Art Ross Trophy winner. A 2x Rocket Richard winner. An 8x NHL All Star. He is one of the most decorated players in hockey history and he’s done all this while battling through and entire laundry list of different injuries. The term “generational talent” doesn’t even begin to describe Sidney Crosby.

Yet Pittsburgh fans constantly spit directly into this man’s face by caring so much more about the Flyers’ lack of success than they do to just focus on how fortunate they are to have had the privilege of watching this legend for the past 14 NHL seasons. I get that it’s pretty embarrassing that the Flyers haven’t been able to win the Cup since 1975. But I’d be way more embarrassed this morning if I were a Penguins fan knowing that you care so little for your own team that you allowed your own barn to sound like this after James van Riemsdyk sent the game to overtime with less than 20 seconds to go in regulation.

I had to do a double take there to make sure the game was actually in Pittsburgh because that sounded exactly like it would have if this game was being played in the Wells Fargo Center.

Oh, and quick shoutout here to Sid for turning into a traffic cone in the neutral zone, allowing Sean Couturier to kick that puck over to Konecny for the eventual game-tying assist.

Looked like Sid thought the game was over already. Little did he know that the best 200ft center in the league was out on the ice and Couturier made him pay for it. And speaking of Couturier taking Crosby out for a walk through the neutral zone, let’s check in on how this game ended in overtime.

Dances Crosby in the final 30 seconds of regulation to send the game to overtime. And dances Crosby in the final 10 seconds of overtime to keep the season alive. If for some reason you are a person who still does not believe the Sean Couturier is quite possibly the best 2-way center in all of hockey right now, then you are very much a dumb human being.

And then they also have the best young goaltending prospect in the league with 20-year-old Carter Hart between the pipes.

That right there is your Selke-Norris-Vezina combination that wins Stanley Cups. So I really hope that Penguins fans enjoy these last few remaining moments to count the amount of days it’s been since the last time the Flyers have won the Cup. Because the immediate future for this team is about as bright as possible, and it’s only a matter of time now before that streak comes to an end. And once Penguins fans can no longer count the amount of days since the Flyers last Cup? Well I don’t think they’ll have anything to live for anymore. They’ll just forget that hockey even exists and the Penguins can finally move to Kansas City where they belong and where they will be treated with the amount of passion and support that they deserve. Because what they’ve been getting out of Pittsburgh fans is just downright shameful.

P.S. – 6 points back with 10 games to go. Montreal, Chicago, Islanders, Caps, Maple Leafs, Carolina, Rangers, Dallas, St. Louis, Carolina. It’s not going to be easy but maybe Panarin and Bobrovsky just want to get back to Russia a little earlier this offseason and Columbus can completely fall off here down the stretch. All I’m saying is that winning 8-9 games here in these final 10 isn’t too far from impossible.