Two points in the standings and 10 years off of my life and I wouldn’t have it any other way. The Hawks holding on for dear life in the last minute was a fucking DRUG and it’s why we watch hockey. It’s why we are fans. It’s why this is fun. And it’s why you should absolutely be rooting for the Hawks to make the playoffs. You should be pining for it, longing for it, desperately hoping for one more playoff series, one more moment like last night. The only way to get that is to be in the playoffs. No, the Blackhawks aren’t going to win the Cup, but that doesn’t mean they shouldn’t be trying to win and get better from within. There are so many Hawks fans that are just miserable people and want to punt on the rest of this season and this era. I can’t understand that. This team has too much in the tank to tank. I’d rather grow with this group, get in the playoffs, get swept(I don’t think they’d get swept by anyone in the West), and get valuable playoff experience for Debrincat, Strome, Perlini, Sikura, Kampf, Murphy, etc. The guys who haven’t really been there. The guys who will need to be ready for next season when hopefully the Blackhawks are in a better position to contend for real. There’s value in getting experience and there’s value in re-establishing a winning culture. It’s perfectly rational to believe winning is good for the long run and…it’s fun. 12 games to go. The Hawks might need to win 10 or 11, but it’ll be fun to live and die with every game. 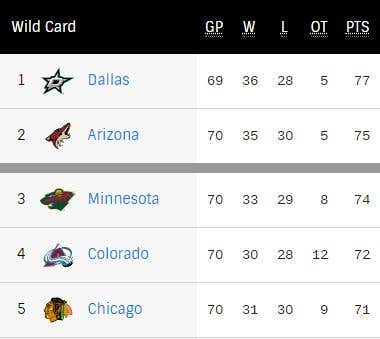 This is where things stand after adding two points on the road last night. 4 points out with 12 games to play. Like I’ve been saying all along, the best thing the Blackhawks have going for them is that there’s a bunch of shit teams in their way. Colorado has no depth or defense, Minnesota is old and slow, the Yotes are… well they’re the fucking Coyotes. The Hawks just need to take care of their own business. Which…won’t be easy 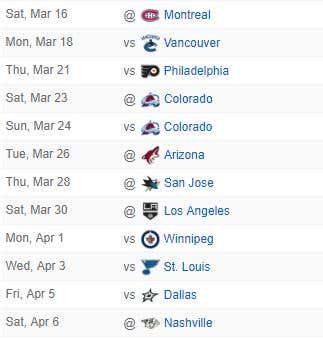 12 games to go. 7 are against teams that are either in a playoff spot or in a virtual tie for one. 6 games on the road. I said after the Dallas game that the Blackhawks would need to win 7 of 8 to get back in the race. Well, they really need 6 points out of that Colorado, Colorado, Arizona stretch. This is going to be the real March madness. Every game, every night, every shift matters. What could be better than that? Drafting 5th? Fuck those people.

–The Blackhawks are finally playing like a playoff team. Or at least a competent team. They dominated the Leafs early last night and they were playing with a level of desperation defensively and on the forecheck that they’ve lacked for the last two years. It’s beautiful to see and to watch even if they couldn’t sustain that attack in the 3rd period.

–I’ll take flu game Corey Crawford over most goalies in the NHL. He was officially back last night

Until he wasn’t. Crawford stopped 17 of 18 shots through 2 periods. His tummy was bothering him the game was in hand…gave the game over to Delia who faced…30 shots in the 3rd period. Delia would probably want at least one of those back, but that was an absolute onslaught and he did enough to get out alive. He looked SPENT heading back to the locker room after the game.

–Brandon Perlini has earned himself a contract this month. He’s been unbelievable. We knew he was big, we knew he could skate, we knew he had a good shot, but I didn’t know he could think the game as well as he does. He’s really put it all together. He consistently puts himself in good areas and Strome knows how to find his wingers. That line can cook. Sign all three and keep them together

–I still refuse to believe that Jokiharju isn’t one of the Blackhawks 6 best defensemen. That 3rd period was a fire drill in the Hawks end. Losing battles, losing races, failing to clear, unable to get possession and skate it out. The Hawks need all the help they can get right now and Jokiharju would be an upgrade over at least Forsling.

Next up is Montreal on the biggest drinking day of the year. The Barstool Chicago Boys are going to getting after it early and often.

The Game starts at 6pm. I am going to try to be upright for that one at OG Social, but there’s a solid chance that I will be hungover on my couch at that point. Either way, I hope to see you all there early and often and we can at least get properly hyped.