It's been a tough few months for Baltimore Sports fans when it comes to big name players shipping out of town. Some guys who have been around for 10+ years no longer call Baltimore home and it's a weird transition time for the Orioles and Ravens. With Terrell Suggs signing with the Cardinals, Joe Flacco being traded to the Broncos, and Adam Jones signing with the Diamondbacks, the guys we grew up watching are now out the door and suiting up in different uniforms. Suggs was here for 16 years, Joe for 11, and Adam for 11, they were staples in our sports world. Those three were arguably the faces of Baltimore over the last few years, and I'm talking about people who were still current athletes or coaches, not guys like Ray Lewis, Ed Reed, Cal Ripken or anyone else like that. So with all that said, who is the new face of sports in Baltimore?

There is no doubt that Justin Tucker is the best kicker in football, and possibly in the running for best kicker ever. All he does it boot 50 yarder after 50 yarder and sling the best fried chicken in Baltimore. He may be better known for his Royal Farm commercials than his play on the field, and that isn't a reach. Over the last few seasons he's been known as basically the only real playmaker for the Ravens. They don't have the big name skill position guys and he immediately jumps to mind when you think Ravens and Baltimore sports. Off the top of my head, I think he's only athlete in Baltimore who is in the top 5 for their position, maybe Marshall Yanda, but Tucker is no doubt the best kicker in football and the biggest name on the Ravens now. They don't have the big name, high profile players like they used to so that lets Tucker hold the reign there. He's always dabbing or dancing after made field goals, so he goes viral and is seen all over the internet when he does it. I think you have to give real consideration to Justin Tucker being the face of Baltimore sports.

When you think of Baltimore Sports, Chris Davis jumps to mind, and it's not for the right reasons. Long gone are the days of Davis finishing top 3 in MVP voting and bashing 53 homers. Now he's being benched for the last month of the season so he won't strikeout 200 times again, getting criticized by announcers of the team, being made fun of by fans, and he had arguably the worst offensive season in MLB history last season. Also due to is insane contract, his name comes up when you think sports in Charm City. It's for all the wrong reasons, but people think about him when the city is brought up. Being the face of the city sports scene doesn't always have to be a good thing, Davis is a damn good example of that.

There was a time where Michael Phelps was one of the faces of athletics in this country, and arguably the world. He put on absolute shows in the Olympics and probably goes down as the greatest Olympian ever. It's insanely awesome that he's from Baltimore and reps it whenever he can. Guy is a huge Ravens and Orioles fan, used to live in Baltimore and were was a decent chance you'd run into him if he was out. Phelps bleeds Old Bay. Since his retirement he's taken a backseat at events in Baltimore but still pops up every now and then. Regalrdess of that he'll always be associated with Baltimore and the sports in town, many people would even throw him on the Mount Rushmore of Baltimore athletes with Cal, Ray, and Johnny Unitas.

Wait, could a coach actually be the face of a cities sports scene? I think it's 100% possible, especially with how much the Baltimore people love John Harbaugh. He's a decently good looking guy, he's been around since 2008, and like I mentioned in the Tucker paragraph that for the past few seasons they haven't had the big name, well known players, that all adds to guys like Tucker and Harbaugh being arguably the faces of the franchise. And now with Buck Showalter out in Baltimore too, he's the biggest name coach in town. He helped bring the second Lombardi Trophy to this football obsessed town, so that tends to put a smile on the faces of Baltimore citizens.

Could Lamar Jackson be the face of Baltimore now? A guy who has been here less than a year, someone who has only started 7 games at QB in this town, buttttt someone who also led the Ravens to a Divisional Title in his short time here, could Lamar be the face of the city? Absolutely I would take that argument. He IS the electric player that I have been saying the Ravens haven't had, the guy puts asses in the seats. He's a young, talented, electric superstar in the making. With Flacco being shipped out to Denver, Flacco was handed the keys to the car, and everyone in Baltimore is ready for this ride. I said it above, this town LOVEs football, they're obsessed with it. Most fans wanted a change at QB and they got it, Lamar can be the breath of fresh air that they've been dying for. This town was starving for a dynamic, playmaking QB, and they got it in #8. Say he leads them to another AFC North title next season and this guy could own Baltimore. Check back with me at this time next year, there's a decent chance he's #1 face for Baltimore Sports. 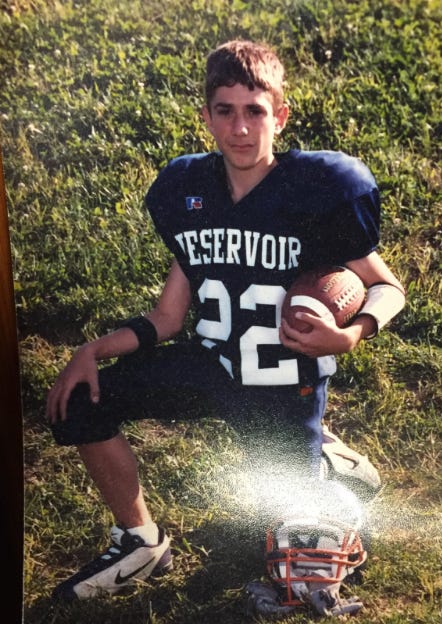 Am I the face of sports in Baltimore? I think there is a legit chance. I'm a staple at Orioles games, helped with the broadcast of the Baltimore Brigade AFL team last season with Banks, dislike the Ravens very much, and once interacted with Michael Phelps on twitter. I'm basically a walking billboard for Baltimore sports. You see the picture above, I played two (2) years of JV football as a kick returner/scout team saftey/ and scout team wide receiver. Jack of all trades. I don't limit myself to just one thing. You'd recognize my face before you recognized 98% of any of the Orioles faces, that's for damn sure.

Those are the big candidates that jump out at me when I think of the new faces of Baltimore Sports. There's no clear cut front runner, and I'm not so sure thats a good thing. Maybe in a few years we can look back and have a clear cut answer, Lamar, Cedric Mullins, or Adley Rutschman hopefully. Not having any real marquee athletes in a thriving sports town like Baltimore stinks, I want the big sports names back.