John Kuhn retired as a Green Bay Packer earlier today in what I can only describe as completely and perfectly emotional. Despite being out of Green Bay since 2015, Kuhn is and always has been a Packer. And I would be lying to you if his speech didn’t make me cry.

There were the typical thank yous:

– He thanked Mike McCarthy for taking chances on him during crucial moments of the game, where most coaches maybe wouldn’t have.

– Kuhn credited the line for making it easy for him on 3rd & 1, time and time again.

– To the training staff for fixing him when he was broken and teaching him the difference between being hurt and being injured.

But then he thanked the man who has always said Kuhn was one of his favorite all-time teammates.

“To my ol’ partner, Aaron Rodgers. I will never forget the card games, the luncheon costumes, the pranks in the locker room, the game day walks down the tunnel, and the feeling of playing in a game alongside you. I truly believed we would win every game with you as our quarterback.”

*Gets choked up, takes a sip of water, apologizes for getting choked up* 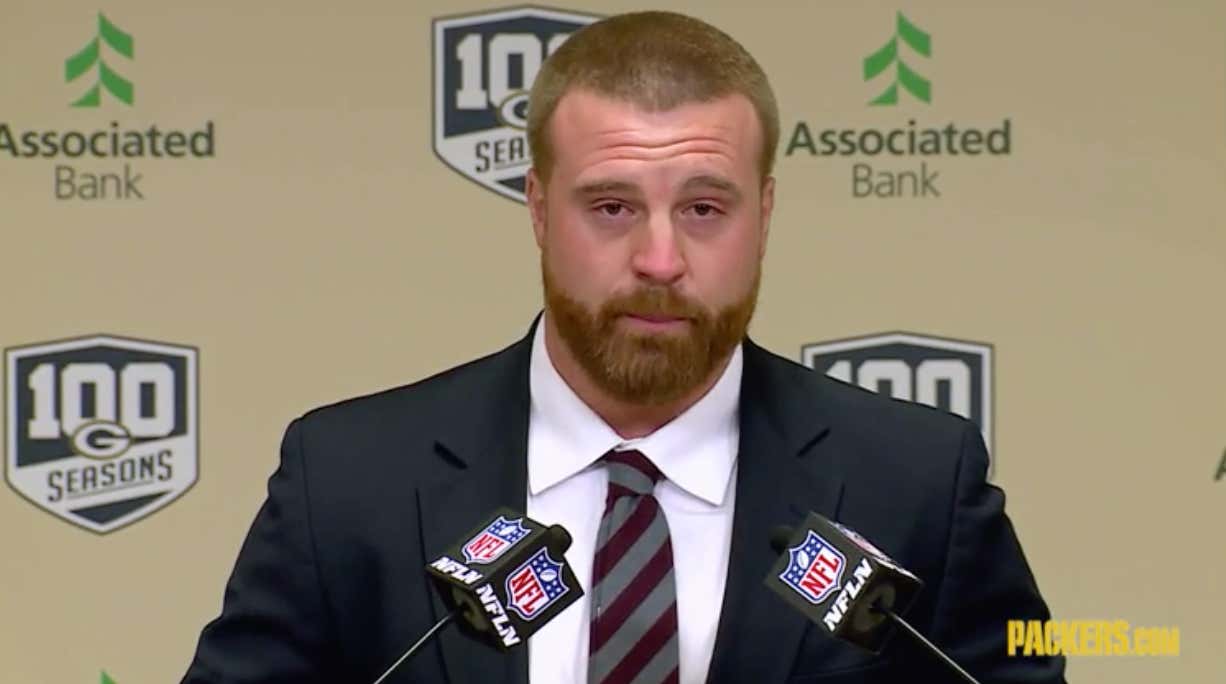 “I am very proud to call you my teammate and know that I was a better player because of it. I tried every day to make you proud to call me yours.”

People love to hate Aaron Rodgers. They love to make him the bad guy, to paint him as a control-freak diva who HAS to get his way. Yet here we have a guy who played with him for 8 seasons, crying about what a fantastic leader he is, how Rodgers made him better, and how his goal was for #12 to be proud of him. And it’s not just any guy, it’s John Kuuuuuuhn.

Of course that’s going to get the tears flowing!

And if that wasn’t enough, not only did he say Packers fans are some of the greatest sports fans in the world, but he talked about what the crowd chanting “KUUUUUUHNNN!” meant to him.

“When you don’t touch the ball a lot, you have a hard time telling (if the fans like you). By the time they started getting as loud as they got, it told me right there I had a lot of fans out there and a lot of people that cared about the team and supported me. It drove me … to even work harder than I did in the first place. It was special to me and something I’ll always cherish.”

I’ve missed it and will continue to miss that sweet sound… KUUUUUUUUUUUUHNNNNN!!!