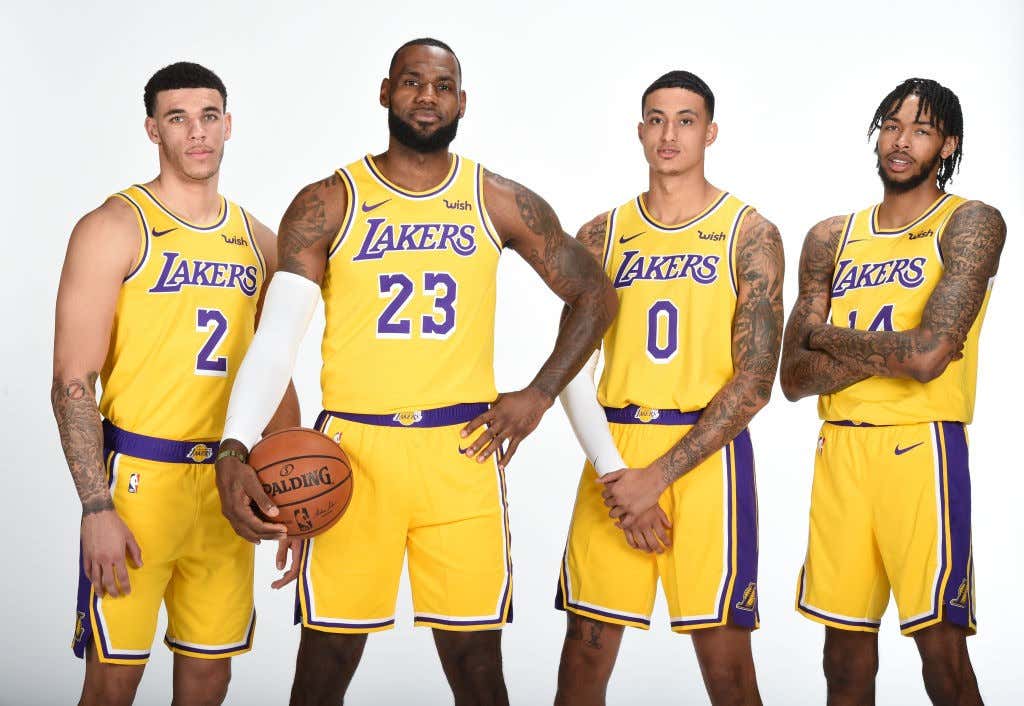 (LA Times) – Often when he’s asked about the Lakers’ struggles, LeBron James refers to the team’s inexperience. He says they are a young team and attributes the mistakes they make as a group to that.

On Wednesday morning before the Lakers played the Denver Nuggets, James expanded on that line of thinking. He said twice it was unfair to place so much on the shoulders of the younger players.

“You have four guys in our top eight rotation that you have to really rely on, and it’s unfair to them to ask for so much when they’re in their second or third year,” James said. “We have Zo [Lonzo Ball], Josh [Hart], Kuz [Kyle Kuzma] and B.I. [Brandon Ingram]. And we had Zu [Ivica Zubac] at the time. That’s like five out of our top nine guys that we rely on, and they’re in their first and second year. You can’t find one other team in our league right now that has to rely on that much every single night from their young guys that’s in their first or second year.”

I know today is mostly going to be about sucking LeBron’s dick for his very impressive career achievement of passing MJ in career points. That’s pretty cool and he should rightfully be acknowledged for it. However, we can’t sit here and let this latest bullshit go unchecked. Yesterday we learned that the real reason the Lakers stink is because every other team is out to get them and conspire together to make it hard for the Lakers to improve. They played the victim in the whole AD situation and that was funny in it’s own way. But this? This is rich. Now the Lakers suck because they have to rely on young players in their main rotation. You heard him, there is no team in the league that has to rely on first, second, and third year players more than the Lakers do, so it makes sense as to why they are not going to make the playoffs. Forget the fact that LeBron knew what this roster was before making his decision, and you didn’t hear him talk about missing the playoffs before it actually happened, I find this rather hilarious.

You know why else? It’s not true. Now it is true that the young kids play a lot, they total 51% of the team’s minutes which certainly goes along with what LeBron was saying. The only problem is, that’s the 4th most in the NBA. The Kings, Hawks, and Bulls all have younger players who play more minutes than the Lakers. Obviously the one thing you notice is that all those teams are really bad, except for that whole Sacramento Kings thing. You know, the team who is ahead of the Lakers in the standings WITHOUT the best player on the planet. It is the Kings who actually lead the league in first/second/third year player minutes, yet they seem to be working out just fine. In fact they’ve had their best season in years playing in the exact same conference that the Lakers do. Weird.

Then what about the Nuggets, who are actually a high seed in the playoffs and have been the entire year? Their young guys play 50% of their minutes compared to the Lakers 51%, so is that such a huge difference that we should treat the Lakers with sympathy? Again, they also do not have the best player on the planet. So it is actually possible to rely heavily on young players and still be successful in the NBA, we have teams that are not named the Lakers that are currently doing just that. Maybe it’s just that the Lakers young talent isn’t as good as LeBron thought when he first got there and now he’s looking for an excuse as to why they underachieved? He’s obviously used to playing with a more veteran team, but this is just classic LeBron in my opinion. I didn’t hear him take too much responsibility for why his team struggled, instead the excuse is that it’s not fair to expect so much from a team that has the 4th most minutes being played by their young talent.

Maybe the young guys struggled because he publicly tried to trade them at the deadline and ruined their confidence. Is that their fault for only having limited experience or could it be something else?

Again all I can say is it’s just sad to see a historic franchise like the Lakers have to try and come up with excuse after excuse as to why they are going to miss the playoffs for the 6th straight year. Just know it’s certainly not LeBron’s fault despite being their best player, the blame should solely be pointed at the rookies, sophomores and third year guys for not having more experience. Shame on them.