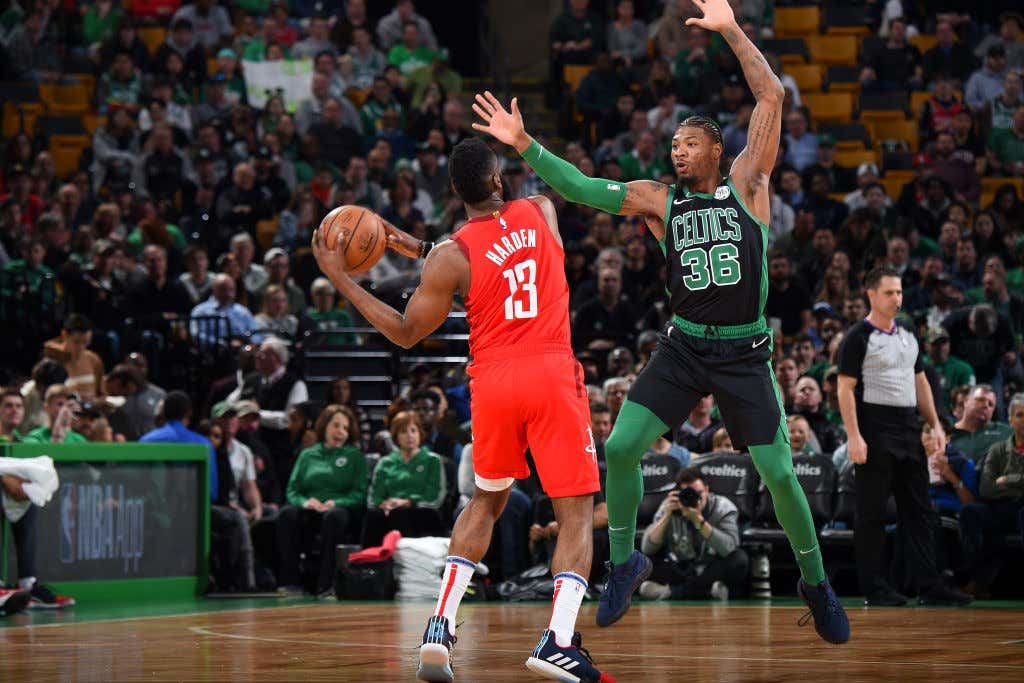 We’re at the point of the season where we have a pretty large sample size of play and thus we can start to debate about the NBA awards/All NBA teams. Personally, I’ve been searching all day to try and find something positive to blog about Celts and while this season has been a hot dumpster fire, the one constant positive has been the defense of Marcus Smart. Now fellow Celtics fans for years have been preaching about how Smart’s defense has always been All NBA caliber, but each and every year he seems to get snubbed. Yes, there are times he flops just like everyone else, but when players around the league keep bringing up his name when listing the toughest defenders in the league that certainly means something. Well now, Smart has the metrics to back up at the very least a 2nd Team All NBA Defensive selection. Allow me to explain.

If we just look at recent history at the four guard spots to made up the All NBA Defensive teams last year we see the following names: Jrue Holiday, Robert Convington, Dejounte Murray, Jimmy Butler. All four of them very good defenders and even though they are classified as guards, it’s clearly 2 PGs and 2 SGs. If you look at last year’s defensive real plus minus, you see Dejounte Murray #1 among point guards, and Holiday #4. In terms of the SGs, Jimmy Butler was #3, and the data I saw had Covington as a SF but somehow he was able to sneak in as a guard. If you look at the defensive real plus minus in terms of SFs, Covington was #1. So, while it’s not an end all be all in determining who fills the guard spots, history tells us it’s a solid place to look.

Defense is obviously hard to track, and while Drtg of an individual player can be cloudy because it’s more about the team he’s on and who he shares the floor with, there are also signs we can look at to see how that’s valued. For example, of all NBA players who played at least 70 games last year Dejounte Murray led everyone in Drtg. Again, the position classification is wonky, but Covington was #1 in Drtg for SFs. You look at other areas and you’ll see Murray was 7th in STL% while Butler was 2nd in steals. So how does this all relate back to Marcus Smart’s 2018-19 season? Well, currently Smart ranks

As you can see, the man has been one of if not among the best at his position on the defensive end this season. So while in previous years it was mostly Celtics homerism that put Smart’s defense on a pedestal, he has come into this year and flourished in every single category that the All NBA Defensive Teams usually focus on. Now I don’t really have a preference whether it’s 1st or 2nd Team, the point is there has never been a stronger case for Smart to just make one of them. I would even argue he’s flopping less this year so even that negative has been addressed. Listen, this season has been an underachieving disaster, we can all agree on that. But when you try and spinzone yourself into how this team could possibly turn things around in the playoffs just remember that rotations shorten, and one guy that will be getting heavy minutes just so happens to be one of the best defensive guards in the entire league.

It’s about time the NBA acknowledged it.