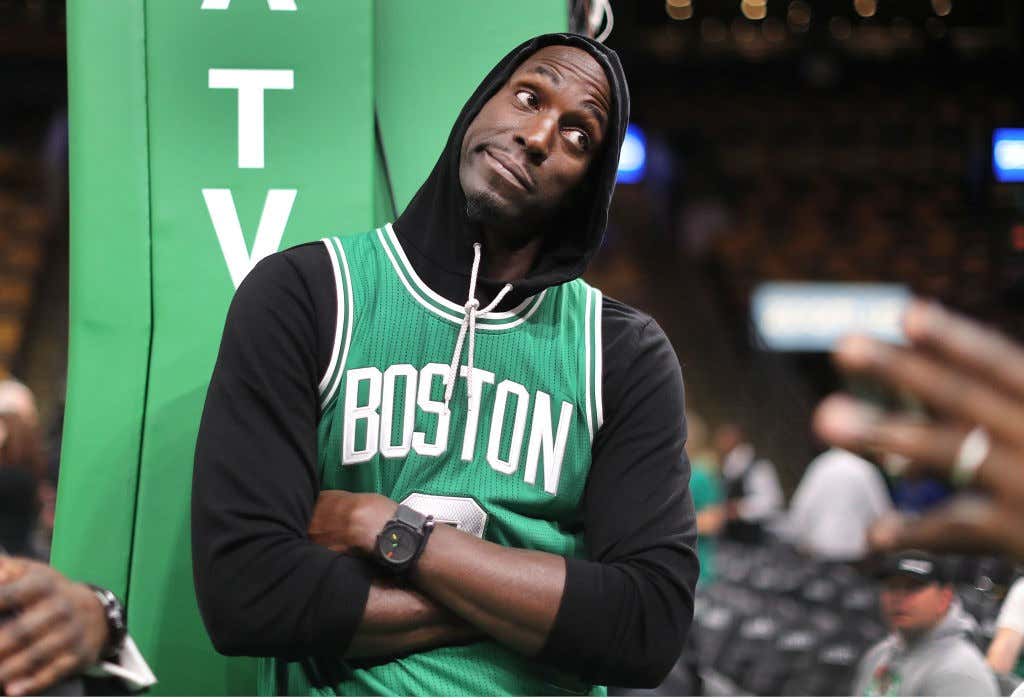 By now you’ve heard the news that Jason Witten is coming back to the Dallas Cowboys. I don’t really care about that but it did make me start to wonder. Who do I want from the Celtics past to also unretire in an effort to fix this goddamn disaster? The answer took about 0.00001 seconds to pop into my brain, and that man is Kevin Garnett. Let me just go through the facts first.

– The Celtics currently have an open roster spot

– This team is soft as baby shit

– Kevin Garnett is not soft

Maybe you heard Danny Ainge on the radio this morning, but he pretty much talked about how the biggest issue with this team is they have no resolve. That every time things start to go bad they just cave and poop their pants. There’s no toughness, no intensity, all that crap. So here’s my idea, it’s not that complicated. KG unretires and signs up to fill that roster spot. You don’t play him 1 second (unless you want to because I guarantee he could still give you a good 5-10 minutes), and instead you just have him scream and yell and motivate every player on this roster. Kyrie talked about how he wanted a 15 year vet to join this team right? Well KG fits that bill and even the most stubborn player on this team would not be able to handle disobeying Garnett. We all want this team to be as good as that 2008 team, well why not insert the heart and soul from that squad? Get that blood into the system of this team and hope that helps them change their fortune. Everything else they’ve tried clearly isn’t working, it’s time to think outside the box in my opinion. You saw how much he loved being back earlier this month against the Lakers

Wouldn’t you agree one of the main problems with this team is for whatever reason this team doesn’t get what it means to be a Celtic and play Celtics basketball? You know who does? The man that played a huge role in delivering the only banner I’ve ever seen in my lifetime. It almost makes too much sense I’m a little concerned Ainge hasn’t already done this. Now it gets tricky, I’m pretty sure your rosters need to be finalized by tomorrow for the playoffs, but again the idea isn’t to play KG, you just need him on the bench. You just need him in the film room and at practice. Maybe he plays a PJ Brown role in the playoffs and hits a gigantic midrange jumper in a Game 7 that propels this team to the Finals. Don’t tell me you couldn’t see that happening.

Listen, I know this is ridiculous, but I’m only half kidding. I see no downside to this idea and I would appreciate it if all the parties involved could make this happen. If KG isn’t down, here is my list of recent former Celts I would like to see unretire to help achieve this same goal

1. Kevin Garnett
2. Kendrick Perkins
3. Paul Pierce
4. Antoine Walker (this team loves getting down by 20+ and nobody gives a motivating speech down 20+ like Toine)
5. Eddie House
6. Scott Pollard (this is weird but look at his track record, the guy has good championship juju)

It’s time to accept the fact that everyone inside the building has no fucking clue how to fix these issues, so it’s time to bring in a no nonsense scary as hell legend. I look forward to the Woj bomb.