So you’re a degenerate, I’m a degenerate, we’re all degenerates.  Love action.  Nothing better than the thrill of putting your entire bankroll on a west coast, Sunday night NBA game you know nothing about to get you back in the green before pay day on Monday.  Hit it and your scaries cease to exist.  Lose?  Your next week is miserable.  The life cycle of a true gambling junkie.

And wouldn’t you have it, yesterday Vegas just hit us with a bunch of MLB futures props.  Perfect, let’s talk about winning some money. 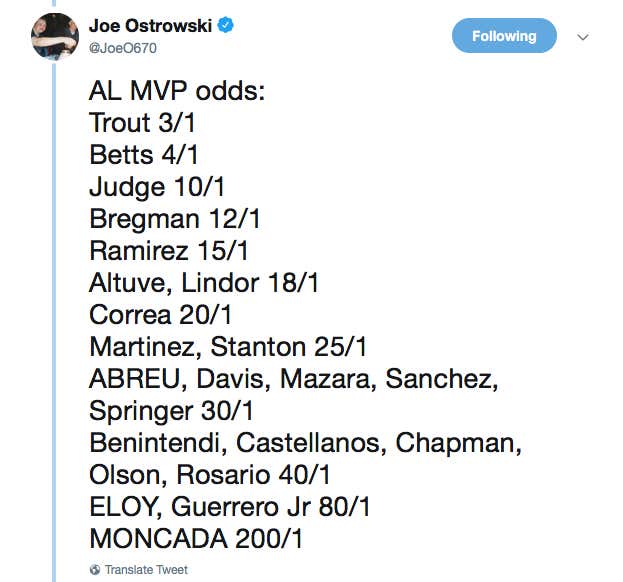 This one is kinda boring.  We all know Trout is going to place 1st or 2nd unless Los Angeles drifts off into the Pacific while the Angels are on a home stand.  That’s a given.  But we don’t play scratch here; we’re looking for value.  And as I sift through this list, which player provides the best bang for my buck?

40-1!!!!  That’s fucking CRAZY value for someone who put up a 6.5 fWAR season in 2018.  Now more and more, voters are using analytics to vote for their MVPs.  It’s not longer who has the most HRs/RBIs and highest batting average.  JD Martinez could hardly sniff a vote last year and he had one of the best offensive years of all time, but he doesn’t play defense.

Matt Chapman won a Gold Glove though.  He’s as good a defensive 3rd baseman as there is in baseball.  Defense doesn’t go into slumps often, so even if his offensive game plummets, his advanced stats will still be solid because of this.  But if he builds on his 2018 season?  Slashes .300/.370/.550 with a .900+ OPS, 30+ bombs and wins another Gold Glove?  Those are numbers that would put him in the discussion for MVP, and at 40-1 it’s worth taking a flyer on.

Abreu won’t sniff an MVP because his defense sucks, so don’t bother wasting your money on him.  Judge strikes out a lot and high K guys can go through extended slumps, so he scares me a bit too, as great as he is.

The last guy I’d consider taking a run at is Jose Martinez.  This little midget is a fucking super star.  Sure he should be a jockey but that doesn’t mean he doesn’t flat out rake.  He could absolutely be a 40/40 guy this year (was 39/34 last year)  while hitting for average, and destroying gaps.  At 15-1 to win the MVP?  Yes please.

Hilarious list considering Harper is going to be playing for the White Sox of the AL amirite?

Anyways… Bryant at 12-1.  Lock it up and rub it down.  I’d bet him if he were 3/2 odds.  I’m that confident he’s going to have an absolutely MONSTER year now that his shoulder is healthy.

Shoulders are finicky.  If they’re not functioning properly, there’s a trickle down effect from them through the rest of the body.  Now Bryant said this offseason his sole focus was to get his left/lead shoulder 100% healthy so he can destroy baseballs again.  Apparently he did, so I have no doubt he will be destroying said baseballs.

The rest of this list is kind of boring.  I love Votto at 30/1 because he’s Joey Votto and he’s the best pure hitter in baseball, but other than that?  Naw.  Machado’s numbers could be somewhat suppressed playing in Petco Park, a notorious hitters park, and he doesn’t walk a lot.  Arenado now has the weight of living up to a new contract on his shoulders as well, so I’d stay away from him in spite of him hitting in Coors Field for 81 games. 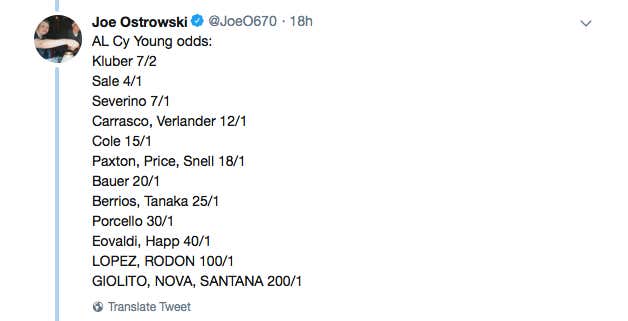 Hate Kluber at 7/2.  Stay away from that, far far away.  He’s shown big signs of regression the last 1.5 years.

Let’s talk about Chris Sale though.  He HAS to win one eventually right?  If he doesn’t, he could very well go down as the best pitcher to never win the award.  He’s got the World Series which is all that matters to him, but he has gotta make room on his trophy shelf for at least one Cy Young.  He’s going to be 30 in a few weeks, and pitchers don’t magically get better after 30, but if he has 200 IP this season he’ll be right there towards the top again.  God damnit I love that man.

But for value – love Cole at 15/1 because he’s on the Astros and the Astros *allegedly* pump their players full of all sorts of funky shit.  Cole was almost good for 300 Ks in 200IP last year and had a sub 3.00 ERA.  If he replicates that, he’ll be right in the thick of things for the race.

Hate Paxton at 18/1 because he plays in Yankee Stadium.  But Snell at 18-1 is good value and unlike MVP, it’s a little easier to win back to back Cy Youngs.  Berrios at 25-1 is another good long shot horse that could pump out a career year, though.  His shit is FILTHY good.  One of the best young pitchers in baseball, yet one of the least talked about. 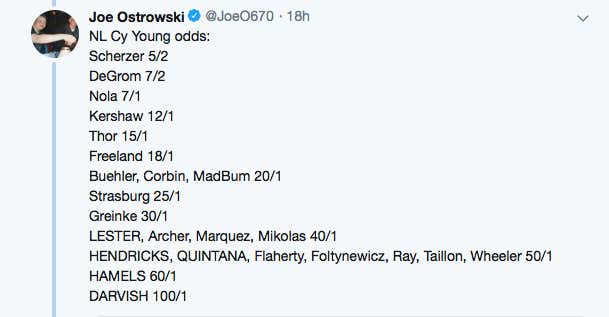 After the Scherzer and deGrom scratch, this is the most wide open race of the entire list.  I love Nola at 7-1, but wouldn’t touch Thor, Kershaw, Buehler or Madbum with a 10 foot pole.  Way too much injury risk there.  Need someone who’s good for 200+ IP or a freak reliever.  Anyone of these guys could be top 5 in CYA or any one of them could have shit years.

For a long shot candidate I do love Mike Foltynewicz though.  The Pride of Minooka had an All Star nod last year and could be prime for a breakout on the national stage.  A true power pitcher, if he gets hot and racks up high K numbers, he could have some nice value at 50-1.  Obviously a long shot, but I’d guess he’ll put together a year that at least garnishes votes, whatever place those votes may be.

So let’s get fucking rich here.