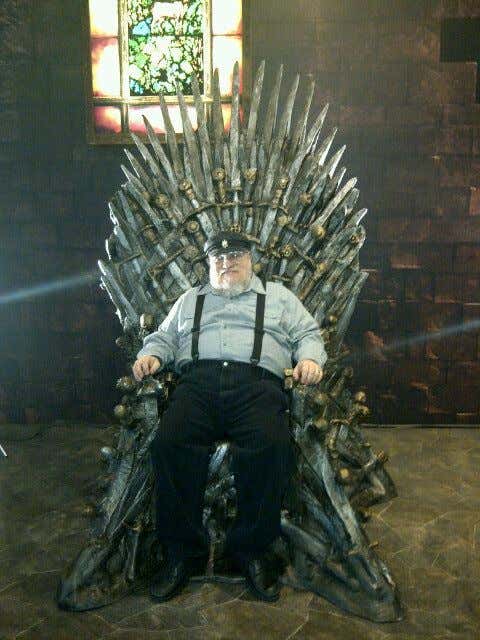 EW- George R.R. Martin had a chance to appear in the upcoming final season of Game of Thrones, yet decided against it. The author whose A Song of Ice and Fire novels form the basis for the HBO hit was extended an invitation by series showrunners David Benioff and Dan Weiss to travel from his New Mexico home to Northern Ireland to be included in a scene in season 8. But the author decided to focus on writing his next book, the long-awaited The Winds of Winter, instead.

“David and Dan invited me to a cameo in one of the final episodes, which I was tempted to do,” Martin told EW. “But I didn’t think just for the sake of a cameo I could take the time to return to Belfast.”

Hey look, George. Tell me you don’t like HBO. Tell me you don’t like the show. Tell me you don’t like Benioff and Weiss’ fuckin neck tie. But don’t tell me you can’t make a cameo on Game of Thrones because you have to write your books. I understand writing a book is like having a kid in that you can use it as an excuse to get out of almost anything. But once your kid is older than 7 like the Winds Of Winter is, that excuse is out the window. It’s not like this book and definitely not the final book are going to come out before the show is over. And however the show ends is how Thrones ends. Sure there will be more details in the book and a gaggle of nerds will only consider the written words of Ice And Fire as the true story of Westeros. But for the millions of normal people that care wayyyyy too much about this story, everything will officially wrap up on May 19th around 10:30 pm ET on TVs across the planet.

What I am trying to figure out is why George really turned them down. If I wrote the biggest show on the planet, I would Stan Lee my ass into every episode on principle alone and may even end everything by putting my fat ass on the Iron Throne. Meanwhile all Double R wants to do is hang out in New Mexico, slam down bunch of chicken tenders from Los Pollos Hermanos and come up with exciting new ways to murder everybody’s favorite characters. Actually as someone who works from home and would rather face The Mountain in a trial by combat then fly somewhere for work, I respect the shit out of this move. But don’t tell us the reason you are not popping in on Thrones is because you want to finish the book that will clearly never be published after you’ve been galavanting around ever since the show became a hit. It insults our intelligence.