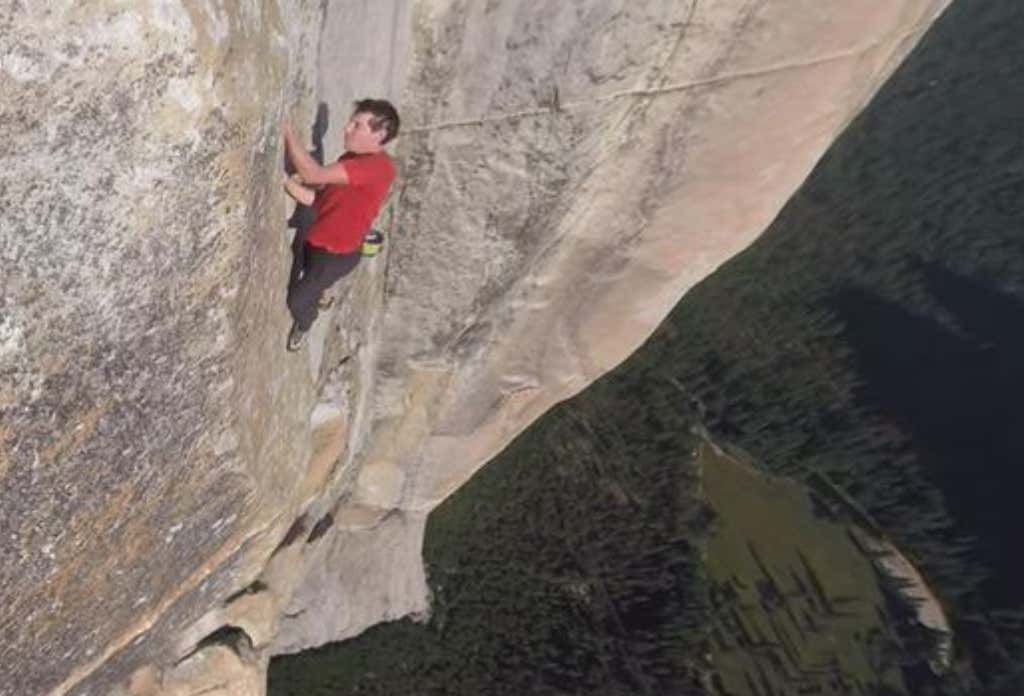 Free Solo won best documentary at the Oscars on Sunday. It seemed to be the one win that everyone celebrated. Nobody yelled about the lack of representation in the film; nobody blogged about how the mountain deserved the award more than Honnold; nobody said that the role should have gone to someone in a wheelchair. But now that we’re here, if someone were to free-solo El Cap in a wheelchair, THAT would be impressive. Unlike this Alex Honnold character who did it with the luxury of all four limbs.

I saw the movie on Sunday before it won. Admittedly, I was impressed. My hands were sweating streams  while he was crossing the “boulder problem.” They really hyped that section as the challenge of his climb. When they zoomed in on some of the footholds, I could tell this was unlike any of the rock gym birthday parties I attended as a kid. I was also struck by the muscularity of Honnold’s fingers. They look like legs. Sasquatch hands. Unsettling.

Then I reflected for a few days. Certainly this was an achievement for man. And I mean man, not mankind or humankind. A number of men I know posted celebratory remarks when Free Solo won the Oscar. Those of us who saw it know that the real obstacle in the movie was neither Honnold’s lack of ropes nor the technical challenges posed by El Cap; Honnold’s greatest threat was his selfish girlfriend. Cute as a furry button, she spent the entire movie trying to stuff him into a mason jar to keep on the shelf in a house that I presume he paid for. She begged him to think of her, to put her first. She cried tears and tried all the tricks we see from women. And when her weapons proved useless against Honnold’s resolution, she tried to murder him. That’s right—she let his rope slip through her belay as he rappelled down, sending him crashing to the earth. The fall would have killed most men. But because Honnold dared to be great, and because he only eats bird nests, he survived.

For years, Honnold’s happiness derived from sleeping in a van, waking with the birds, cooking himself roots and mashing hummus out of pine needles; a man who went to the woods because he “wished to live deliberately, to front only the essential facts of life, and see if [he] could not learn what it had to teach, and not, when [he] came to die, discover that [he] had not lived” (Thoreau, Walden). As soon as she came into the picture, up went the walls, down came the roof, and into a box did she try to put their life.

But he wouldn’t have it. He told her straight: if I have to choose, I choose climbing. Always and forever, through sickness and in health, for as long (or short) as I live.

And then, he climbed.

I watched with admiration, then realism. The footholds were bigger than I’d thought. His chalk bag bounced jostled on his back, powdering the leafy canopy below like a warm Friday doughnut that Alex and I would resist. The handholds were secure, the gradient more gradual than I’d envisioned. At times, I had the impression he was climbing a hill. It looked fun.

Let’s be honest: it would take work. I’d have to train, and not in the laughably inadequate way that our Rough ‘N Rowdy guys “train” for their fight. I’d need to learn how to keep my heart rate steady upon disturbing a sleeping bat, or to constantly chalk my hands to prevent the sweatiness I felt watching the movie on my couch in my climate-controlled apartment. I would need to increase my flexibility for that karate kick over the boulder problem. Or perhaps I’d just do a double-dyno, which is when you jump from the hill to another part of the hill. Alex mentioned that was an option he was too scared to try.

As I see it, here’s what you need to free solo El Cap: a girlfriend who doesn’t want you to do it (check), forearm strength (check), a healthy diet (check), athleticism (check), and a complete lack of fear (half check). I’m close on this. For six months, I’ll train with ropes like he did. This will mitigate the fear such that by climb day, it will be routine.

I’m fairly confident I can free solo El Cap. The only issue is that my right elbow has been bothering me lately. The pain comes when I pinch and lift at the same time. Even picking up a glass of water off my coffee table takes the pain from a 6 to a 9. I never give a full 10 on my pain scale out of respect for the sensation of childbirth. That’s a 10 probably.