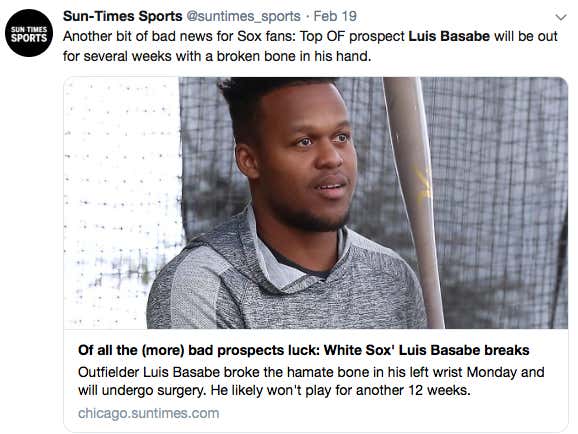 Being a White Sox fan isn’t easy.  It’s almost like we sold our collective souls to the devil for that magical 2005 season.  Ever since then, we’ve crawled through miles and miles of shit to hopefully experience freedom.  Except the end is nowhere in sight

After whiffing on Machado, the Basabe news slipped through the cracks.  I’ve said it over and over and over again – Luis Basabe has every tool.  Might be my favorite prospect they have not named Eloy.  He became more of a household name at last summer’s Future’s Game when he turned on a 102 MPH Hunter Greene fastball and it left the yard:

He just needs refinement as a hitter, but once he finds it he’s a 20/20 threat that can play any OF position and pound gaps with regularity.  But in order to refine his approach as a switch hitter, he needs reps.  Can’t get reps if you’re not playing for 12 weeks.  I fully expected Basabe to end this year in Charlotte and then be ready for The Show in 2020.  That path became all the more difficult after he broke his hand last week.  Hands aren’t something you wanna fuck with on an athlete.  The pain can linger until it’s FULLY healed.

Almost as shitty as Dane Dunning getting shut down with elbow pain before he even threw an in game pitch in Cactus League action this winter.

Now Dane Dunning is a different type of prospect than most of the heralded prospects the Sox have.  He’s a high floor/lower ceiling guy.  Doesn’t have a crazy big fastball like Kopech or wipe out breaking pitch like Cease, but he has command of a plus fastball, plus curve ball, and plus changeup.  He gets by on guile, not otherworldly “shit”.  He’s likely a 3 or so once he settles in as a starter in The Show, but this is the 2nd time in the last 7-8 months he’s been shut down because of his arm.

He’s so polished as a pitcher he could have broken camp with them this year.  But nope.  Not anymore.  No idea if he’s going under the knife or not but even if he does they’ll be monitoring his pitch count like crazy I’m sure.  Fucking brutal.

Is this the end of the world?  No.  TJS is hardly a death sentence these days.  In fact most pitchers come back better and stronger than before they had it.  What sucks about this is it just delays winning baseball on the South Side.  And this fanbase cannot take losing any longer.

A year and a half ago or so, the Sox looked like they had their rotation of the future set with Rodon, Giolito, Lopez, Dunning, Cease, Hansen and Kopech all dominating in MiLB.  Rodon’s had surgery a few times and now Kopech and Dunning have elbow issues, Giolito hasn’t lived up to his #3 billing in baseball quite yet (though his new mechanics look MUCH better) and Hansen has the yips or some shit.  Only Lopez and Cease, fingers crossed, have ascended on what should be a natural path thus far.  Fucking ridiculously bad luck.

Worst offseason of all time.  The White Sox have taken fucking years off my life in the last two weeks.

Please god hit a home run with this June’s draft pick and sign someone massive out of Latin America.