We’ve made it to hometowns and last night’s episode immediately started with a steamy Colton shower scene. Wholesome hometowns. I would love to have a sit down with the cameraman whose job it is to just film Colton shower. I think we’ve had more shower scenes in this season than ever before.

Let’s get into the hometowns where Colton told every father he was falling in love with their daughter and asked for their hand in marriage.

Caelynn brought Colton to Fredricksburg, Virginia, where they did absolutely nothing. Zip. Snoozefest hometown. The highlight of this date was Caelynn’s stepdad, John, who seems like a sweet angel man who just wants the best for Caelynn. He also had a phenomenal dad line. “Maybe you guys are just friends?” Well John, it seems you were spot on with that one. Caelynn told Colton that she is “FULLY” in love with him. Important to note that Colton did not say anything back. Or at least we did not see Colton say anything back. 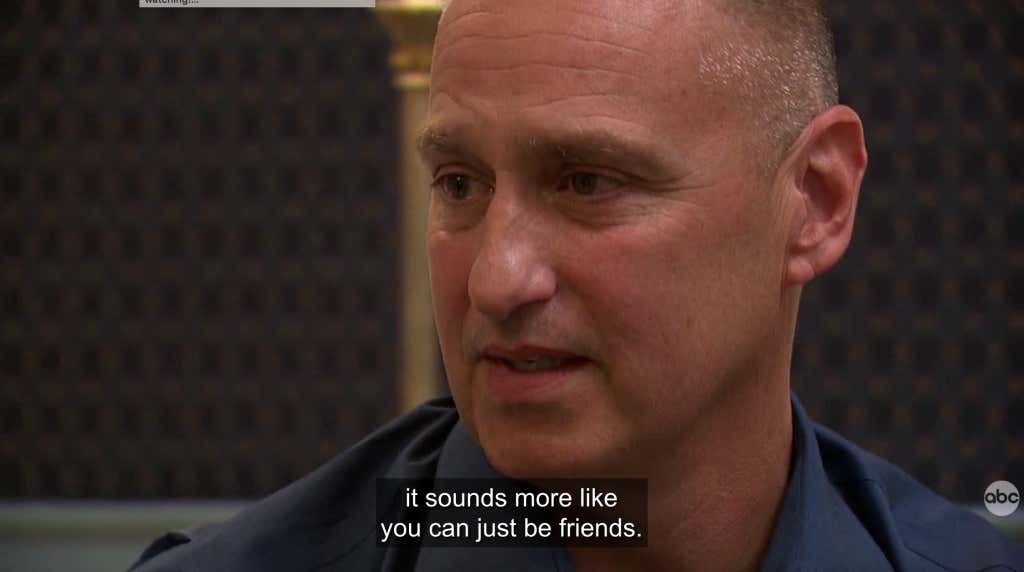 Next up: Hannah G. brought Colton to Birmingham, Alabama.

Hannah G. takes Colton to etiquette class where he learns how to walk with a book on his head and the proper way to eat bread. Not to make this about me, but I have to eat my bread like that every time I have dinner with my grandma at a restaurant and it is the worst. Yes you get a good amount of butter on every bite, but it is extremely tedious.

Colton met Hannah’s parents along with her best friend and cousins. We could not have gotten more southern wife/mother vibes than this scene. 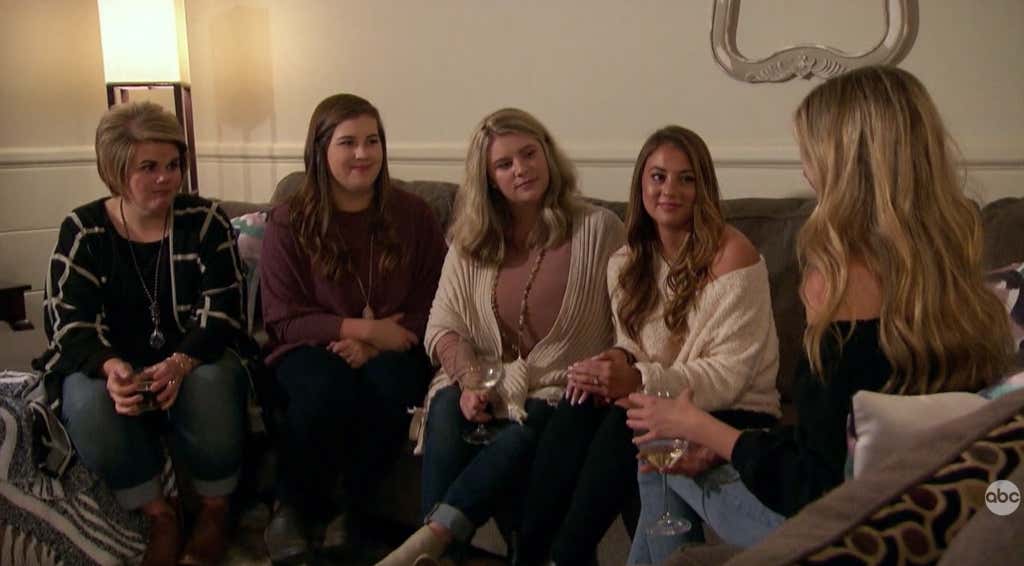 You know they’re getting to the tough questions. AKA Colton’s virginity. Good work cousins. Hannah has no problem with Colton still being a virgin…and honestly this is the most we have seen Hannah talk all season long. She is still such an enigma to me, I cannot for the life of me figure her out.

Hannah’s parents summed up this tweet perfectly. Also her mom’s support for her was adorable.

Hannah G. said that she is falling in love with Colton, and he says it back.

Then Colton headed to Santa Ana, California to meet Tayshia and her family. Just to fuck shit up Tayshia gets her payback from the bungee jump date and takes Colton SKY DIVING. An activity where death is possible. Virgin Colton was horrified at the thought of dying without doing it. We are now 2/2 on hilarious Colton screams with adrenaline rush activities.

Colton met Tayshia’s parents and two brothers and Bryce was ready for his television debut.

Tayshia’s dad sees right through all The Bachelor bullshit. Telling Tayshia “you don’t microwave relationships” brought down Twitter last night. I didn’t see one Bachelor tweeter who didn’t lose it over this line. What an amazing summary of this entire franchise as a whole. But of course, Tayshia’s dad had to cave in eventually and “accept” that his daughter was falling in love after Colton used the same speech he had used on the previous dads.

Honorary mention to one of my favorite Bachelor tweets:

To end the line of pretty boring hometown dates we have Cassie. They meet in Huntington Beach, California and what do they do? Surf. The most predictable activity in Huntington of all time. Is this Teen Beach Movie?

Now I understand how Cassie had a whole other reality show about her life. The script just writes itself. This movie could air everyday on Hallmark or Lifetime and we would wouldn’t bat an eye. Also in case you weren’t aware…

Cassie’s dad also tried to second guess Colton. Nothing like a dad calling a boyfriend, “just a guy.” As the season has gone on, it has become very apparent that Cassie still has a lot of growing up to do. Her dad clearly thinks she is too young. Don’t get me wrong, Cassie seems like a great girl but even she is becoming aware that she is probably not ready to get engaged. When she was talking with her dad, she got worked up and said she didn’t want her dad to get mad at her if she did something that he didn’t approve of. That is youth. Do Cassie and Colton have a lot of potential? Yes, absolutely. But if Colton is looking to be fully engaged at the end of this season it seems like Cassie might crush those dreams (fence jump maybe??). Colton made it clear that he was falling for Cassie…but she hasn’t said that to Colton. Maybe she’s playing a little hard to get? Maybe she is just incredibly unsure and has suddenly found herself in the top 3 confused AF?

The Rose Ceremony brought the return of Chris Harrison. Missed your face, Chris. He escorted all the women inside and Colton gives his three roses to Hannah G., Tayshia, and Cassie. Sending Caelynn home. Caelynn turned to Cassie and said, “I love you. Bye friend. Get engaged.” 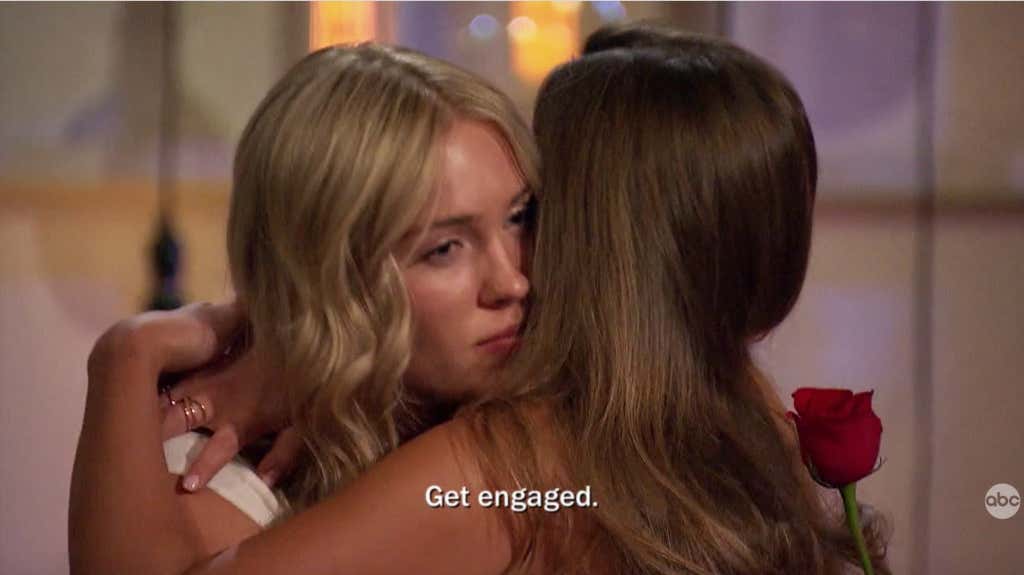 Props to this friendship. The Cassie/Caelynn alliance runs deep. If Caelynn’s not the one, then let it be Cassie.

I think Caelynn is a lock for The Bachelorette. I don’t necessarily love or hate her for the job, but she is super young (23) so that’s my only problem with that. She just seems to have the formula that screams bachelorette to me. Plus she set herself up real nice towards the end there. She fell in love with Colton and she was very persistent about wanting to get married and start a family.

It seemed the hot topic last night was Colton asking all four dads for their daughters’ hands in marriage. Many people were upset at this “old school” tradition but Colton stood by his values. Kaitlyn Bristowe was also weighing in on this topic on Twitter and Instagram.

The only thing that bothers me is the played up drama about the dads saying yes. That is a storyline that I’m a little tired of. I understand Colton wanting that reassurance, obviously it is going to come across tacky on television because he has to ask four dads total. Could he potentially wait till the end and then call the winner’s father? Yeah it is possible. It is way better TV to ask all dads in one episode though. Colton also clarified whether he included the moms in these conversations.

I will direct all attention about Hannah G.’s ridiculous rap to Trent’s blog here.