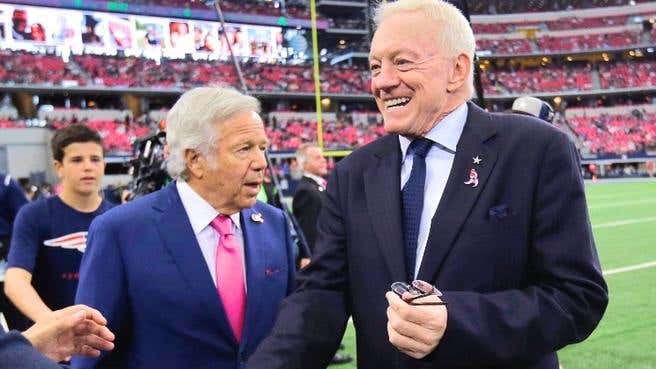 “Well I guess that makes you a hypocrit too.”

And if theres one thing the NFL will not tolerate and thats hypocrisy. Roger Goodell has made that abundantly clear that every owner will be held to the same high standard of accountabilty that he himself is held to- make a ton of money, and dont do anything that makes the league make less money.

We’ll have to wait untill the video evidence comes to light before we make any rash decisions but as long as Robert Kraft wasnt caught having his little penis rubbed in a elevator its safe to say that Goodell wont be supsending him. Instead the Commissioner will likely go with a punishment that is designed to rehabiltate Mr. Kraft so that he learns his lesson. Theres a old saying in crimnal justice that the punishment should fit the crime, so it would seem apporprate that Robert Kraft have to spend the offseason jacking off each and every one of his fellow owners to completion until he realizes what a misstake he made. I can almost guarentee you this will be a affective deterrent to any future owners who might be foolish enough to try to partake in Mr Krafts alleged crimes that have been come to be known as BateGate.

Kraft has always been a hands on owner when it came to his own team- selecting Coach Bill Belchick personally to lead his team to greatness, but I guess in his mind you have to live nasty if you want to dynasty. Now its time for him to put his money where his mouth is, rename his luxury wooden office “Palm County” and put so much aqualube on his hands that Roger Goodell wont be able to snatch any draft picks out of them.

1. The Glazers- sometimes a name says it all

2. The Green Bay ownership Conglomerate.Just a total time suck here. Kraft would emerge from this session with forearms like popeye and hands like Olive Oyl.

3. Dan Snyder- Dan probably hired a private contractor to clear out of of his pubes so that Mr Kraft will have a better line of sight of his dick.

4. Falcons owner- They dont call him Shootin’ Blanks for nothing folks. He strikes me as a guy who has trained himself through a series of Kegel exercises to have phantom orgasms in a sly nod to Atlantas great sports history- always close to finishing but the ultmate reward never comes. The greatest modern day equivlant to Sissyphus rolling his boulder uphill for the rest of eternity is being made to jack off Arthur Blank untill the Falcons win a superbowl. Almost makes 28-3 worth it if your a Falcons fan