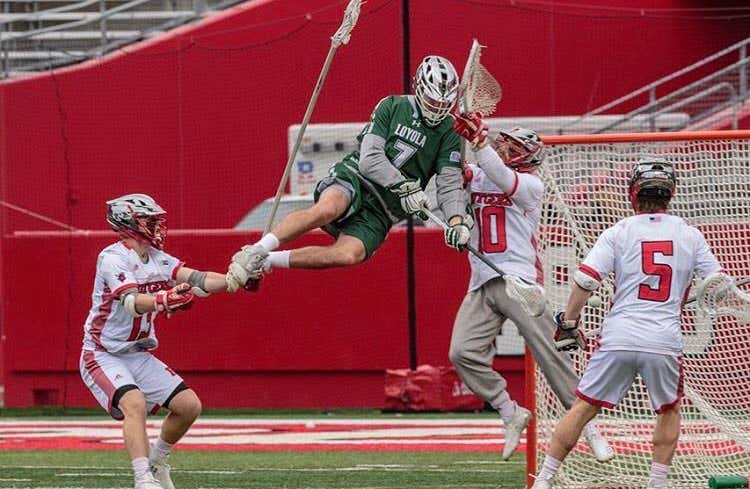 I feel fully confident in saying that there has never been a better time to be a lacrosse fan. For that very same reason, there has also never been a worse time to be a lacrosse goalie. Because everything that makes the game so great and electrifying right now is a lacrosse goalie’s worst nightmare. The addition of the shot clock means now gives offensive players the green light to just go bombs away whenever they please. And now that the crease dive is legal in the college game again? Well goalies are now subject to posterizations like the one Rutgers goalie Max Edelmann was on the receiving end on courtesy of Loyola’s Pat Spencer on Saturday.

Not only does Pat Spencer go airborne here, but he’s able to take on some contact and control his body enough to change up the release mid-flight for a nice little underhand finish. That’s just pure, freak athleticism right there. And if anything, that pole really fucked over his goalie here. Because if he didn’t make contact with Spencer, then there’s a solid chance he just walks out to the front of the net, switches over to his right hand and just casually stuffs the ball in the back of the net with an easy dip n’ dunk. But because he gets pushed, he has to take flight and he has to keep the stick in his left hand which makes this goal about 50 times nastier.

Speaking of some filthy goals from college lacrosse this past weekend, let’s check in on the Ankle Slayer real quick–Grant Ament out of Penn State.

That’s Chris Fake right there. A National Champion and a 1st team All American defenseman. And Grant Ament just put him in a blender. Maybe that big ass ring on his finger will make him feel a little better about this one, plus the fact that Yale came away with the 1-goal win. But Grant Ament is an assassin out there this year and no ankle is safe.

We also got a sneak peek at the final season of Game of Thrones on Saturday courtesy of Drexel’s Reid Bowering.

Do you get that joke? Because they’re the Drexel DRAGONS and Reid Bowering was flying here. I’m pretty happy with that joke so I’m going to keep it in here. But yeah, this was a Full Send from Reid Bowering. Fuckin’ Canadians, man. They don’t give a single shit about their own personal well being. Bunch of animals. And speaking of animals, let’s check in on Tehoka Nanticoke getting himself going this season and putting Albany on his back there in the 2nd half of that game against Drexel to pull out their first win of the season.

Imagine being a freshman and having the nuts to pull that move out of your bag of tricks. You miss that shot and your ass is getting stapled to the bench. Buddy knew it was labeled for the back of the net before the ball was even in his stick, though. That’s how you know you’re feeling yourself out there. Dirty dirty dirty.

P.S. – I’d be remiss to not give a quick shoutout here to Detroit Mercy for picking up a huge win over Marquette and to Richmond for knocking off Notre Dame this weekend. The gap in college lacrosse is rapidly shrinking.