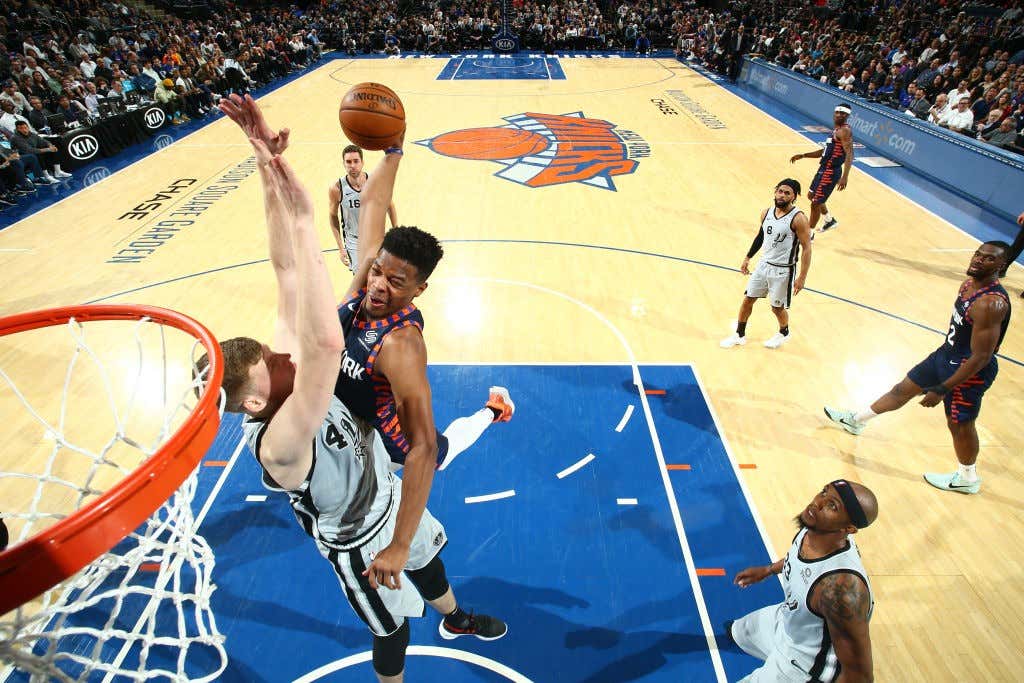 Good morning everybody happy Monday and welcome back to another edition of Last Night In The NBA where we bring you up to speed on everything that went down from the night before in the Association. Unfortunately it was a relatively light day on the NBA schedule yesterday with just 3 games , and unlike what we’ve seen over the last few weeks it was one of those rare days where none of the games were all that close. In fact, the story of the day was more about the shocking upsets than our usual cases of close end of game drama. Seeing as how it’s Monday morning and there’s zero chance you actually want to work right now, let’s just dive right in. If you missed yesterday’s action, here’s what happened.

OK, so Kawhi Leonard didn’t play which is obviously a huge factor, but given how good the Raptors are at home one would think they would be able to handle the Magic pretty easily right? Not so fast! This Magic team is rolling right now, 8-2 over their last 10 games, and despite their shitty record they do have 11 wins against teams over .500 which is the same as IND/BOS and just 1 win behind PHI. This is a ORL team that has shown time and time again they can beat the best in the East. It makes no sense, they technically aren’t even in the playoff picture yet, but what if I told you they’ve now taken 2 of the last 3 from the Raptors? That’s pretty damn impressive, and even more so doing it on the road.

and they needed every point considering perhaps their best overall player in Aaron Gordon had just 7 points on 2-11 shooting. That’s what’s crazy about this win. It wasn’t like one guy went crazy and had some random insane scoring night. The Magic were balanced, got off to a great start in the first quarter, and honestly they survived every since Raptors run with a response of their own. It also helps when role players show up and are solid like Jonathan Isaac was with his 16/6 and 3 3PMs

and listen there is a very real possibility if ORL keeps playing like this that they may find themselves as high as the 7 seed. I don’t think this team is a playoff series upset contender just yet, but they are a team that could push a series to 6 or 7 if they are firing on all cylinders. Especially with how they match up with TOR imagine if they pulled off that first round upset? That would be insane.

For TOR, not having your best player is obviously tough, but so is shooting 41/39% and not even breaking 100 at home. This loss snapped a 7 game winning streak and while Kyle Lowry did his best to carry the load

and Gasol had 16/5/5 in his start, that same old elite Raptors defense that we’ve seen all year just wasn’t there. They got killed on the glass, killed from behind the arc and their 15 point first quarter really put them behind the eight ball early. Luckily their lead over IND is large enough where this loss doesn’t really matter all that much, and with BOS up next which is way more important I can understand why they sat Kawhi. Still a ridiculous 25-6 at home so I doubt Raptors fans are all that concerned nor should they be.

Now this game was a little bit more important. On one side you have the Nuggets who believe it or not are within 1 game of GS for the top spot in the West, and then on the other side you have the Clippers who are hanging onto that 8th spot with dear life. A good week by them and LAC could rise to as high as 5/6, a bad week and they’re in the Lottery. Ownership has made it clear that they want to make the playoffs, and while there’s no shame in losing on the road to DEN, what this did give us was a potential playoff series preview.

Now that the Nuggets are healthy, my god are they a goddamn problem. By now you already know how good their starters are, both Jokic and Jamal Murray are damn good players

This offense started the game with three straight 30+ quarters, and what really sets them over the top is how deep their bench is. Three guys in double figures, four players with at least 9 points, you have a Nuggets team that feels like they can match up with anyone, has the depth to kill opposing team’s second units, all while playing pretty tough defense. When I think of this Nuggets team one day I feel like they are a shoe in for the WCF, the next I feel like they could get a bad matchup in the first round and lose in 6 or 7. That’s a crazy swing but I feel like DEN fans would agree with me.

For LAC, I mean I don’t know how you think you can win shooting 34/14% in that building to go along with 17 TOs, but I would recommend if these two teams do face off in a playoff series to maybe go with a different strategy. Outside of Gallo and Lou WIlliams there wasn’t much to write home about. Gallo was the only Clippers starter to break double digits, this turned into a 20 point blowout in the third quarter and from there the Clippers sort of shut it down. They scored just 40 second half points and now move to 17-16 on the road.

The Kings are now just 1.0 games back for that final 8th spot, and with DAL/UTA/SAC up next, this is a big week for the Clips if they want to hold onto their playoff seed.

OK so this game made no goddamn sense. On what planet should the Knicks be blowing out the Spurs? I don’t care if this was at home either, they had lost their previous 18 in a row at MSG. Here’s the good news though for Knicks fans. The win didn’t really hurt them at all. They still have a 2 game lead over CLE for the 2nd spot in the tanking rankings, and a 4 game lead over CHI. Maybe you haven’t noticed, but the Bulls are basically the best team in basketball right now so I don’t think they have to worry about dropping out of the top 3. With that in mind, why not enjoy the performances of some of the young talent on this team

You look up and down this roster and almost everyone played well, the Knicks finished with 51/43% splits and a ridiculous 16 3PM with just 6 TOs. Dare I say this was their best performance of the entire season? No quarter under 30 points for this offense, six players in double figures, even if you hate the Knicks you have to admit that DSJ is one entertaining player. If he finished that poster over Bertans I’m not sure MSG is still standing to this day. Something tells me if they are stupid and start to pull off a few in a row we’ll see guys “sit” due to injury or something, but in the meantime this was a big time win over a really good team.

For SA, for a team that certainly doesn’t have their playoff seed locked up yet, you can’t be losing to the Knicks. Trust me, I’ve been there, it’s just a terrible look all around. DeMar DeRozan did his job with an efficient 32 in his 32 minutes

but they struggled from deep as a team going just 6-24, and defensively, woof. Honestly that’s been a big time problem for a team that has now lost 6 of their last 7. Look at these point totals: 127, 141, 127, 125, 120, 130. Those are all in regulation too! The Spurs I know don’t play such putrid defense and if they don’t get their shit together a defensive effort like that is going to put their ass in the lottery. I can only imagine how terrifying Popovich is right now after watching that display of pathetic effort, and it’s not as if SA’s schedule gets any lighter with BKN/DET/OKC/DEN up next.

And that’s it! You’re now all caught up on everything that went down last night in the NBA. We’re back with 11 more games tonight so much more of a full slate. As always if you can’t watch just check back in the morning and I’ll bring you up to speed on what you missed. Have a great Monday!