Okay so I never got into WWE or pro wrestling at ALL.  Like I can name all of the bigger names and that’s it.  I get that it’s A+ entertainment and I’m sure I’d like it and appreciate it should I ever give it a shot, I just never have.

But with Spring Training having started and Bryce Harper still unsigned, I’m imagining this week is going to look like one of those 1990s WWE videos where every time someone gets knocked out someone else’s music will start playing and someone will pop out from behind stage.

Well last night the Dodgers music played.  Prob some corny ass Justin Timberlake song or something.  Anyways, after signing AJ Pollock and maneuvering as if they were going to operate below the lux tax in 2019, Jesse Sanchez and Jon Heyman dropped a late night bomb:

Now this comes as a pretty big surprise considering the Dodgers are butted right against the lux tax line right now at about $200MM and Harper will be a ~$35MM AAV player and there isn’t much wiggle room moving forward either.  Here’s their 5 year payroll outlook: 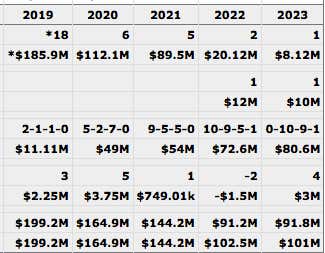 Not pretty for them.  They reset their penalty last year so are good to go for this year and the next 3 should they choose to exceed the lux tax, but they’re currently right at the limit, so what are they doing?  There’s ZERO CHANCE they talk Bryce Harper into a short term, 5ish year deal, right?  Not unless it’s for about $50MM a year.  Boras and Harper are out to shatter guaranteed figure records, not take a short year deal as a 26 year old.

So this is my thought:

1. The Dodgers are crazy because they don’t *need* Harper and his signing could/should/will handicap them from other signings moving forward, although personality wise and proximity to Vegas makes sense and they will do anything they can to talk him into a high AAV short term deal.  Aka shooter’s shoot

2. This is all media posturing big time.  The Sox have touched base with the Dodgers and are operating “pissed off” and “in stealth mode” from what I gather, but I have zero ZERO faith in them to pull off the unexpected and land him, so I won’t even go there.  What I think all of this is is Boras tickling LA’s balls so Philly ante’s up all that much more money.  You don’t hire Scott Boras to go play for the team closest to your home town, you hire him so he gets you fucking paid.  Dude’s a maestro.  Harper won’t sign for less than $326MM, no chance at all IMO.

What I do think happens regardless is Harper finds a team by Wednesday.  My money is on him going to team stupid-money Philadelphia Phillies.

Rosenthal confirms my suspicions.  Teams just can’t go over the lux tax for more than a year or two at a time.  I’d be SHOCKED if the Dodgers can lure Harper with a short term deal.  I still think Harper (begrudgingly?) goes to Philly.  If he doesn’t, their fanbase has every reason to be outraged after the “stupid money” comments from the start of winter by their front office.