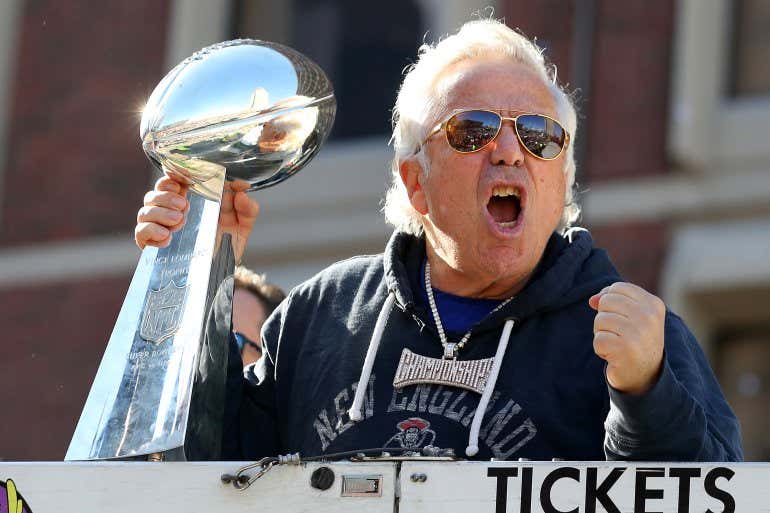 I’ve been patiently waiting. Waiting for the demise of this goddam empire. Sitting there quietly hoping that something will finally topple this dynasty. Dating back to Spygate, all the way through Aaron Hernandez, into Deflategate, right into Bob Kraft knocking up that chick, and then to this morning. A headline from the fucking heavens above for a Jets fan:

To be honest, if the other scandals had taught me anything, its that these motherfuckers are like Illuminati and they’re bulletproof. Bob Kraft could have been caught on camera in a jacuzzi filled with Pepto Bismol, clipping a hooker’s toenails while she shaves his buttocks, and it probably wouldnt have mattered. They’re Teflon at this point. Not to mention they’ve already had their run, it would be too little too late.

But STILL. Its been like 4 years since I really thought there was a chink in the Patriots armor. And I thought we finally found one. I thought Bob Kraft was banging hookers. My mind began racing. Maybe this is a “Taken” situation? Maybe he’s in a dark booth sipping champagne bidding on chicks with Sultans from Dubai. Maybe he was involved in some human trafficking at the border. Maybe we were gonna have some underage details. And perhaps if not Bob Kraft himself, maybe the operation he was involved in had ties to these kinds of nefarious plots. This was IT. This was our CHANCE. We were gonna tie Bob Kraft to some sort of evil shit. For a brief couple minutes…it was happening. IT WAS ALL HAPPENING.

And then what happened? I found out he’s just getting his dick tugged on by a masseuse. I mean Jesus Christ talk about a misleading headline. The difference between purchasing a woman for sex and getting a handy from an Asian is ENORMOUS. One is a bridge that only a few are willing to cross…the other is a bridge you can find yourself on by fucking accident. Like “whoops, I thought I was just getting a back rub for a pretty good price, and the next thing you know there’s a finger in my ass!” I mean you’re not even an adult if you havent gotten a tug during a massage. So as much as I desperately wanted to Cancel Bob Kraft, I cannot, in good conscience, do that. I’m a Pats Hater but first and foremost I’m a rational male adult and there’s just no way any average guy can throw stones at Rub and Tug Robbie on this one. I’d love to. I’d love to just spin zone this and say hes a sexual deviant and cant be trusted or respected, but honestly I’ve simply been jerked off too many times by Asian women to do that. I’d be a hypocrite.

So, back to the drawing board. Waiting for Tom Brady to kill a guy or Bill Belichick to do blackface or some shit. Motherfucker.

PS – Bob Kraft only has to pay $59 for his handies????? Goddam. I guess thats why you’re a billionaire, right? I’ll never be a millionaire because I’m throwing out like a hundred and fifty bucks at West Garden. Bob Kraft…the guy really does have it all. 6 Rings. Billions of dollars. Hot ass girlfriend. Dancing with Cardi B at his Super Bowls. Partying with rappers at his after parties. And cheap ass handjobs. The rich really do get richer.