I have one request for the people who made this film:

Get out of my brain.

I don’t usually post 26-minute videos. But that’s because no 26-minute video has ever done what this one does, which is hold up a mirror to the thoughts bouncing around in my head every waking minute.

First take the story structure. Like virtually all Patriots hype videos of our time, it hits all the notes of the usual sound clips from the usual suspects of doubters and Pats haters, juxtaposed with Tom Brady shoving their negativity down their shrill little throats with his play. And I have to say, there are so many moments here that I haven’t thought about in weeks. The bullet he hit Gronk with at the pylon against Houston. Phillip Dorsett’s flipping catch in the end zone against Miami. Brady dropping a touchdown right into James White’s bucket as he got drilled in the face. The Warp 11 drive they opened the Green Bay game with. The seam route to Gronk over Ron Parker in the first Kansas City game. Josh Gordon’s catch-and-runs, including the one that made him the 71st guy to catch a TD from Brady.

But then the device where it keeps flashing back is just brilliant. Ring One. Ring Two. And so on. The 4th quarter against Seattle in XLIX, that still might be Brady’s finest hour, given the defense he had to fight through. Of course 28-3. Then LIII. Just a magnificent story brilliantly captured.

But the way this thing crawls into my skull and attaches to my cerebral cortex is with the pop culture references. A partial list:

Just one after another. To the point I can’t tell if they peered into my soul or my Blu-Ray collection to make this. But there’s really not much difference.

The Academy Awards are Sunday. Best Picture is expected to go to Bohemian Rhapsody or A Star is Born or whatever. Best Documentary is undoubtedly going to the Ruth Bader Ginsburg thing. But as far as I’m concerned, they can just scrap the whole show right now and just give everything to Tom Brady – Six Rings. The GOAT of Pats videos.

P.S. Pray for No. 17, REBUILDING. Though I admire his spirit, this is a tough way to go through life. 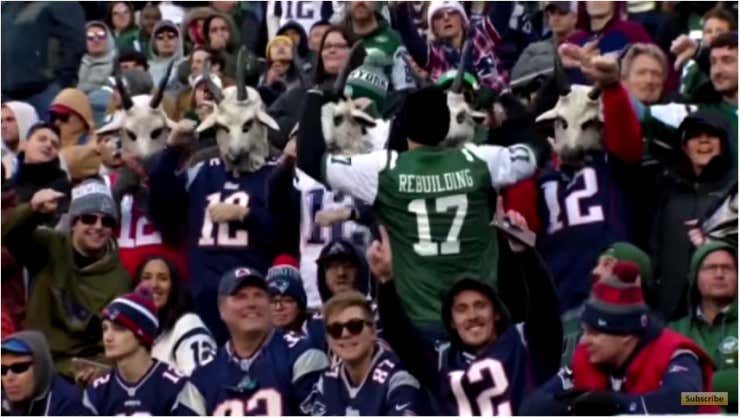