No Machado, and I’m done putting faith in the organization that they’ll make a move for Harper.  The pain on losing a franchise altering player to the worst franchise in MLB history in terms of winning percentage is still here and most fans have lost their trust in the organization.  I’ve had a lot of people tell me they’ve asked for season ticket refunds, of course to no avail.

So what do we do?  The White Sox aren’t winning much this year.  The Action Network says their new O/U in 2019 is 74.5, only a game less than what it was prior to them whiffing on Machado.  I personally would bet the under and think they’re a 68-72 win team or so.  We will see improvements and Eloy will be inserted into the lineup, but unless the team goes ham this season, I just don’t see a 75 win team as is.  I hope I’m wrong, but my gut says I’m not.

I’ll still go to the 20-25 games I usually attend, though I’m sure attendance will plummet even more.  But this is what I’d do organizationally if I were the Sox:

Make a move for these free agents: 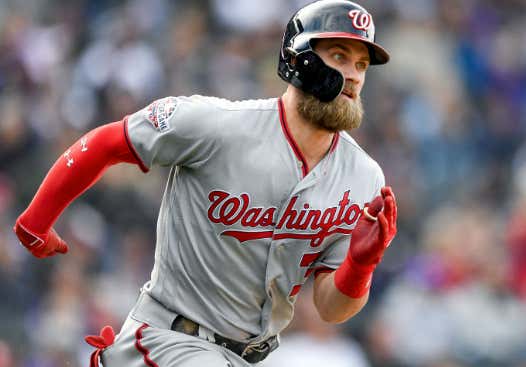 Sign Bryce Harper.  Just do it, please god just give him what he wants and makes it happen.

We all know that’s not happening though.

But there are still a few interesting pieces they can go after.  CBS Sports has a great free agent tracker where one can catch up on who’s going where, who’s available, etc.  Now before the Machado news, Marwin Gonzales and Gio Gonzales were both linked to the Sox.  Regardless of the Machado failure, these are two players I’d go after.  Neither have qualifying offers attached and neither should command long term deals.  Let’s see where they’d fit on the team:

He projects to be a solid enough every day player in 2019.  Only 29 years old and can play anywhere on the field.  I don’t imagine he’d cost much at all, something along 2/@25MM with a 3rd year option or something.  No idea though.  He’s a Boras client and Boras gets his clients paid unless your name is Mike Moustakas.  His power would play up in Chicago though.  I could see him taking the CF position and dropping 20 bombs no problem while getting on base at a solid enough clip.  He’s a professional hitter and solid defender.  Instant upgrade over the incumbent.

Another Boras client, and this would be his 3rd go around with the Sox.  They traded him for Thome in 2005, re-acquired him with Gavin Floyd back in 2006 and they traded him again in 2008 to Oakland for Nick Swisher (gag).   And he’s had a good career.  He’s good for 175ish quality IP every year and would be a perfect addition to the rotation, assuming they don’t plan on rolling with Dylan Covey or Manny Banuelos this year.  I can’t imagine he’ll be too expensive either.  He’s another 2 year guy I’d say.  Maybe even 1.  No clue.  All he’d be doing is trying to eat as many innings as possible until Cease and Kopech are ready in 2020.

Those are the 2 (3?) moves I’d make in the next week or so.  They’re good ball players who shouldn’t be too expensive who will put together professional at bats and innings for the team.

Next I’m Putting These Players On The Trade Block:

Basically, everyone not on a pre-arb deal that I think has any value at all.  The White Sox will objectively have a really good bullpen this year, but what’s the point in having a shut down bullpen when you’re objectively not going to win a lot of games?  And yes, with Rodon only having 3 years of control left and a poor health track record, I’m looking to move him if he’s cruising through the 1st half of the season.  Same with Abreu – one year left on his deal, try and flip him at the deadline.

Everyone else would be dealt for flyers or packaged together to acquire a better piece.  Again, their bullpen arms could objectively help a LOT of contenders, so they should have some decent value, especially if it’s a sellers market this July.

I’m loading up on as many top 100 guys as possible and staying the course of accruing as much high end talent that is on the cusp as possible.  What else is there to do at this point?  Build from within and act like a small market team.

There is a LOT of talent a year or two away.  2020 was always the target year anyways.  Eloy, Robert, Collins, Cease, Madrigal and more are all on deck.  Good times are still on the horizon regardless of this whole Machado mess.  It’s just gonna take an extra year or so for them to take charge in the division.