NY POST – Jurors seated on the historic trial of Joaquin “El Chapo” Guzman routinely ignored the court’s instructions by checking Twitter and reading reports about the case — and nearly came to blows in the jury room during deliberations, one of the panelists says in a new bombshell report.

The juror, who remained anonymous in the article, dished on the secret life of the panel in a conversation with VICE News.

As the preeminent El Chapo scholar of Barstool Sports, the end of the trial was like a dagger to the heart.  No not because of the verdict – fuck that guy.  Just the fascination with the whole show, all the absolutely wild facts and twists and turns that would come out every day.  Jurors trying to avoid the trial so they could avoid being murdered, with excuses like “I watch Narcos and I want his autograph.”  Chapo promising he wouldn’t murder them though.   His WIFE – so much about his wife.  His desire to buy an AK 47 for his 1 year old daughter.   His ONE HUNDRED MILLION DOLLAR BRIBE to the President of Mexico. Chapo having a cartel boss’s brother killed for leaving him hanging on a high five.  The $800 million “cocaine train” that ran from Mexico to NYC.  An informant saying when he met Chapo there was a naked man chained to a tree and he made fun of his jorts.  The insane numbers of times I wrote Chaps instead of Chapo and accidentally slandered my big jolly bearded best friend in Texas.  That Chapo had his cousin – a cartel member – murdered for calling out sick when he wasn’t sick. And how the guy most responsible for taking down Chapo was the damn IT guy, leading to the best Photoshop of my career: 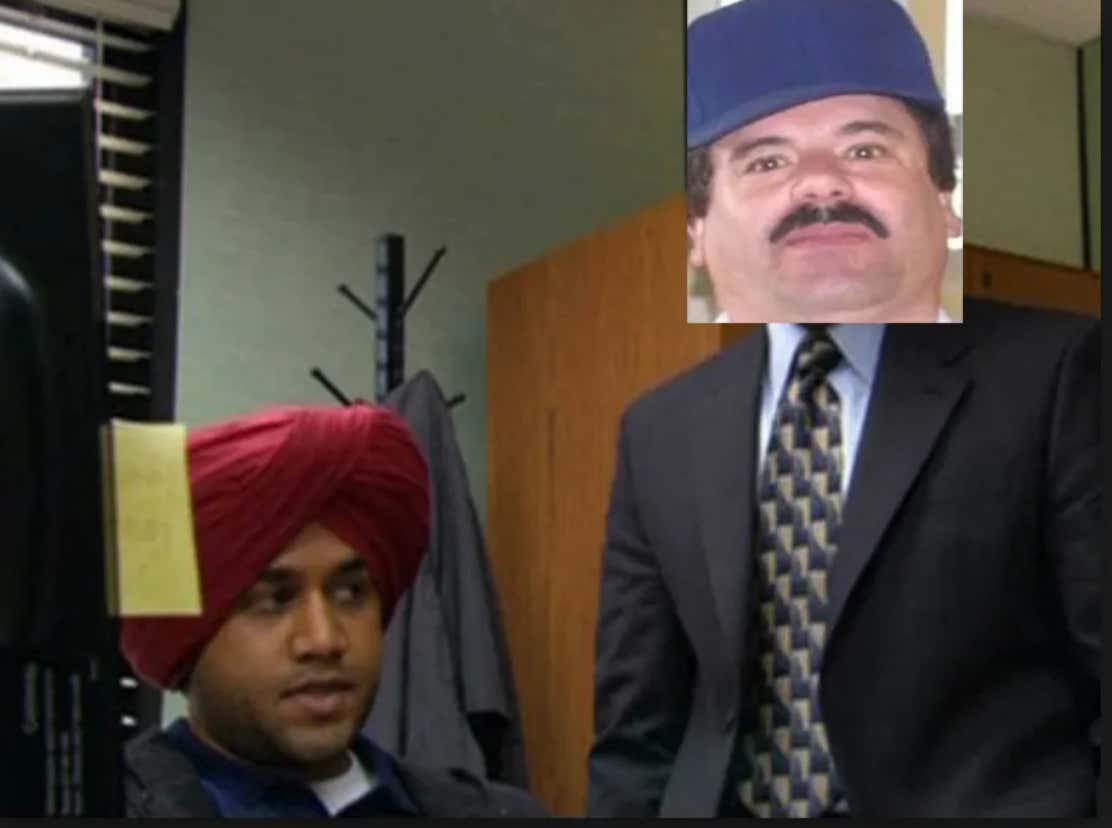 Netflix knows it – serial killers and drug cartels, that’s what moves the needle.

Anyway, you can imagine my excitement when this news dropped – one of the jurors (allegedly) anonymously sitting down with Vice to give a full behind-the-scenes break down of what it was like with the jury.

“We were saying how we should have our own reality TV show, like ‘The Jurors on MTV’ or something like that,” the juror said of their ordeal during Guzman’s protracted and high-security drug-trafficking trial, which ended with the kingpin being convicted of all 10 counts.

Things like, they all sat on social media the whole time:

…despite the “mountain of evidence,” the juror all the panelists still focused on things they shouldn’t have — like media reports.

“I thought we would get arrested,” the juror said of looking at articles and reporters’ Twitter feeds.

A damn US MARSHAL had to break up one of their fights:

The juror also revealed that tensions got so high at one point during the six days of deliberations that a US Marshal had to break up an argument over “personal space in the jury room.”

The judge confiscated cell phones, but jurors used Smartwatches to read articles - specifically, this one I blogged about, El Chapo’s lawyer’s alleged affair with “The Vegan Bernie Madoff”:

The juror said at least seven people on the jury were aware of a story published Jan. 12 by the New York Post about an alleged affair between Chapo’s lawyer Jeffrey Lichtman and one of his clients. At the request of the lawyers, Judge Cogan met privately with the jury to ask a vague question about whether anyone had been exposed to any recent media coverage. The juror said the group responded honestly: They hadn’t seen anything. But moments after the judge left, someone allegedly used a smartwatch to find the article.

They all did the Billy Madison “Goo!” when some freakazoid drug lord came in.

Juan Carlos Ramirez Abadia, a Colombian drug lord known as Chupeta, or Lollipop, with a ghoulish face from multiple plastic surgeries, made an especially strong impression. The juror jotted down a note: “Scary-looking dude.”

“I’ll never forget when I saw Chupeta’s face as soon as I entered the courtroom,” the juror recalled. “He literally made me jump.”

And obviously a ton more but I don’t want to just repurpose all their stuff.  Basically if you are fascinated by El Chapo and cartels and drugs and insanely high profile court cases, you should love this stuff, and if you’re not, what the fuck is wrong with you.

behind the scenes+ 6 Tags