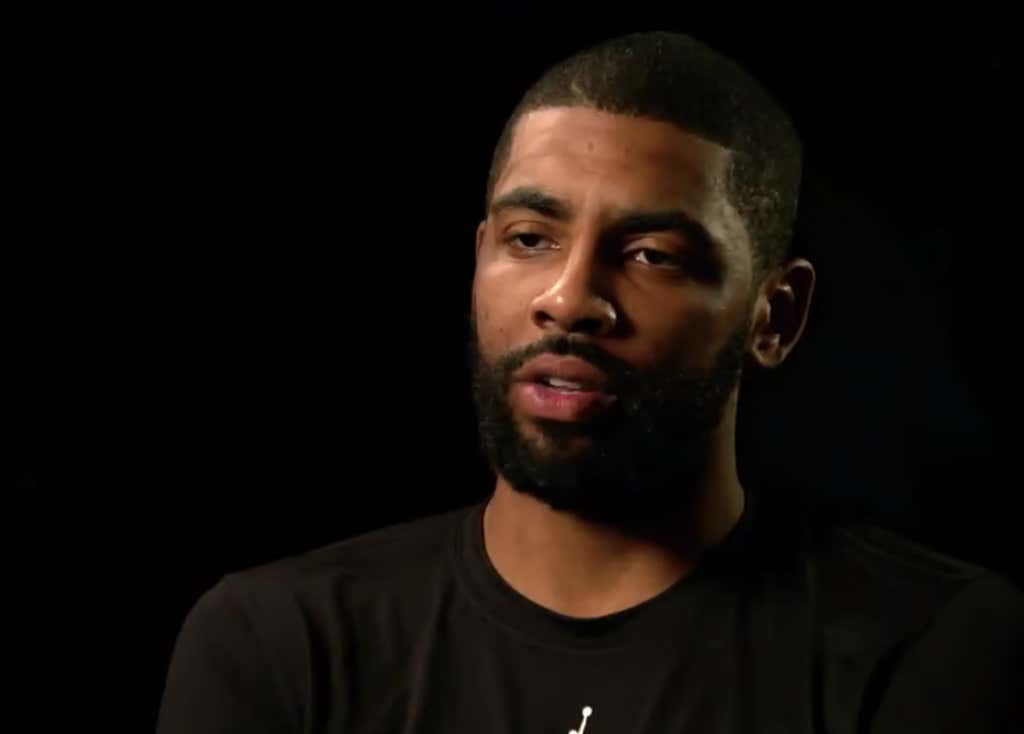 When I heard that Kyrie was going to be having a sit down with Rachel Nichols on The  Jump, I couldn’t wait to see the footage. Mostly because he’s been the focus of a lot of drama recently, but also because I couldn’t wait to hear some classic Kyrie word vomit. Some people don’t like it and think it makes him sound weird, but I can’t get enough of it. The weirder and longer his answers are the more I like them. You ask him something simple and you get a lengthy response of bullshit that would make my postgame blogs blush. So after watching this interview a few times, it was mostly what I expected. While there was certainly some mumbo jumbo over the course of the 4 minute interview, Kyrie did touch on some subjects and issues that I found really interesting. Here’s what stood out to me

This came early, but was something I found probably the biggest takeaway from the entire thing. After hearing him talk about his minutes and how much he wanted to play as a 26 year old in his prime I wanted to go back and look. In October Kyrie averaged 31.6 minutes a night, and then 32.2 minutes in November. I would argue those were the two months where things were really at their lowest. That’s a little different from the 34.6 minutes he played last October in his first year, but then in November of that season he played just 30.3 a night. Seems pretty much the same if you ask me.

But the point is, Kyrie basically confirmed what many of us thought, was that Brad’s rotations were all sorts of messed up to start the year. Remember he is not without blame for how this team started and how they were able to integrate everyone back into the lineup. Kyrie mentions Terry Rozier and his desire to play more minutes, and again that pretty much confirms what we all thought as to where a lot of the issues early came from.

He doesn’t exactly practice what he preaches

There was a part where he had this quote

“There’s a professionalism that you have to really showcase every single day. And that’s what the great ones do.”

He said this in response to the young kids. This seems like a common theme with Kyrie, he loves to basically say the young kids need to get their shit right. This bothers me because would we say Kyrie has been acting with professionalism? Whether it was blowing up at Brad on the bench at the end of Orlando, and then throwing his teammates under the bus, then there’s the whole All Star shit and flip flopping about his future, if he’s supposed to be the one that sets the example, why is he surprised that the young kids may follow his lead?

This is a common theme I feel like. Kyrie says stuff like this which is what you want to hear, but he doesn’t always practice what he preaches. If I were to sum up his season so far, I’m not sure I would go with the idea that he’s shown great professionalism.

Headlines do make their way into the locker room

So he sort of dodged this question like I figured he would. I wish the question was more direct, but I’m sure they talked about that and this is where they settled. Instead of asking about his plans, he was asked about how the talks can  be a distraction. What I found interesting about his answer was he talked about how everything that’s said in the media and the rumors are “energy taxing”. Well, the thing is he could have put all that to bed if he wanted to. He made the choice to add fuel to the fire, so to me this sort of falls on deaf ears. If you don’t want to deal with the distraction, don’t cause a shit storm, that seems pretty simple.

To me this is still where Kyrie struggles the most. He’s right that you should have to try and be a leader, you just are one. You lead by example. Kyrie talked about how he has that inside him he just has to go do it and prove it, well….let’s see it.

Everyone made a huge deal of this when it happened. If he says apologizing to LeBron was just something he needed to do in order to move forward in his life, fine whatever. Who are we to say that’s not true? I don’t think it’s a coincidence that he also threw in the part about not regretting what he did and the choices he’s made almost as if this was code for “yeah I called him but don’t worry I’m still happy with my decision”. That seems like something he probably knew he had to say going into this interview given all the drama surrounding his future and what the internet thinks that call meant, and I wish they would have gone a little deeper into that whole situation. Hearing him talk about that call all I could think about was how he basically sounded like Michael Scott

So for me, this sit down was interesting, shed some light onto some issues that we all sort of knew and speculated about, but it’s not as if we learned anything new. I walk away from this feeling like for the most part Kyrie was simply saying the right things, and at this point though talk is cheap. I need to start seeing it. I did find it interesting how he again spoke of the young guys and their struggles early, but didn’t really mention any of the vets that were also not playing the best basketball to start the season. If we’re being honest the problems were way deeper than just Jaylen/Tatum/Terry, I think everyone who watched this team knows that. Why Kyrie continues to just single them out is anyone’s guess.

Naturally this will make the rounds today and there will be some that will take this interview and spin it in a way that Kyrie is unhappy and is leaving and all that shit. This is a huge stretch for this team and Kyrie specifically, and now that he’s come out and talked the talk we need to see him be that great player/leader and walk the walk. He wants this pressure and well, now he has it.