I’ve never seen a more pissed off fanbase in my entire life.  I tried justifying it with a bullshit blog yesterday while my head was spinning in a million different circles but in the end the White Sox didn’t make the best offer.  They completely and totally fucked up and they look like fools to everyone in Chicago and in the country.

You wanna get a premium free agent?  Fucking pay them.  You will NEVER EVER land a premium free agent if you try to play the market as a 62 win team.  Sometimes you gotta make an unorthodox or even bad (?) business decision even though you know it’s the correct one. 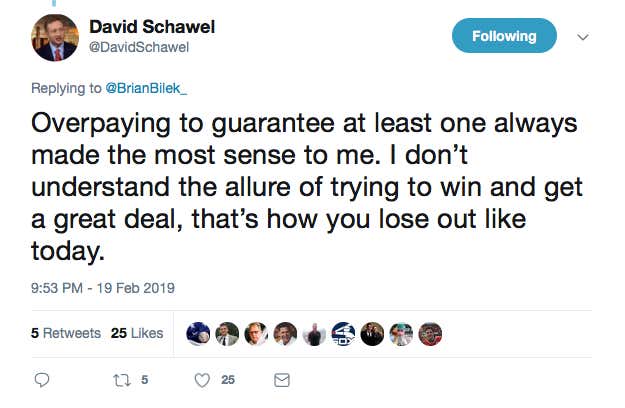 But instead you dicked around and every last one of you look bad in doing so.  The creativity of the offer isn’t anything to be proud of.  Nobody on earth gets a pat on the back for performing their most basic job requirements, so spare me the “we are proud of our offer bullshit”.  It’s all lipstick on a pig.

I think the breakdown for whom White Sox fans want sent to the stockades goes something like this:

In the end they all deserve some amount of blame.  And it starts with the man upstairs.  He’s the one ultimately cutting a check and the one who has final say in all financial decisions.  He lost out on the first premier target he’s had in… forever and the fanbase wants him outta here.  This was the final straw.  Both organizations he owns is a complete joke.

Then we get to Kenny Williams.  He had this comment yesterday:

So let me get this straight.  You “couldn’t offer $300MM in base salary” but at the same time had an offer on the table for Machado that could potentially exceed that number?  Kenny, you just contradicted yourself and your GM in one sentence:

I don’t know who’s telling the truth and who’s not, but when the SVP and GM are saying two different things just minutes apart from each other, they both look really, really bad.  All he had to say was this:

“we’re disappointed to fail in the execution of a signing of this caliber.  No further comment at this time”

Give some cookie cutter bullshit and hand it off to Hahn.  JUST SHUT THE FUCK UP.  Let the lawyer speak.  Don’t contradict the very public comments that “money won’t be an issue” when you just said it was in fact, an issue.  Talking about money when the organization has little history of spending significantly is the fastest way to get on the fans’ shit list, and Kenny’s been with the organization plenty long enough to know that.  Just stupidity top to bottom yesterday.

And aside from that, more contradiction.  “We can’t pay $300MM but we also gotta figure out a way to pay for OUR players that might be due $300MM in 6-7 years”

1. You have know idea how any of these prospects will turn out.  But Machado is actually already a star, so fucking pay him
2. Say Eloy goes off and hits .320/.400 with 40 bombs a year.  Are they not going to pay him in 2027? Like actually PAY him?  Because what it sounds like to us is there’s no chance that could happen, even though you planned on having to do so?  I could be taking crazy pills here, but I’m also pretty sure I’m not.

Which brings us to Hahn.  I’ve obviously been a big Rick Hahn supporter.  I sold t-shirts with his goddamn face on them.  I thought he was going to be the one to lead us to the promise land.  He still might be, but as we sit here today, I’m mad at him.  I’m mad at him because he told me TO MY FACE that money wouldn’t be an issue.  That, and at the very least, he’s gotta be on the same page as his SVP.

I do, however, think he’s least to blame and is hamstrung by ownership, but that was probably his most important job in this.  He didn’t sell his owner well enough to convince him to cut a check big enough to land Machado.  That’s his biggest failure in this, IMO.

Complete and total failure all the way around.  Top to bottom.  The only way to get back in the fanbase’s good graces is to walk to the dealership, pick out the LAST $300K car available and say, “I’ll give you $325K for that car to make sure it’s mine”  They tried to get way too cute the first time and of course they failed and for whatever reason it doesn’t sound like they’re gonna go back to the Ferrari deal, but instead will go pick out a nice affordable Honda that should last a few years.

I plan on having Hahn on Red Line Radio in the coming weeks and will ask him the toughest questions possible.  Shit like, “what 26 year old free agents on HoF paths are available in the coming years that you will pursue?”

Oh and by the way… they Sox are linked to just about nobody in LatAm heading into their first penalty free J2 class in a few years.  Awesome