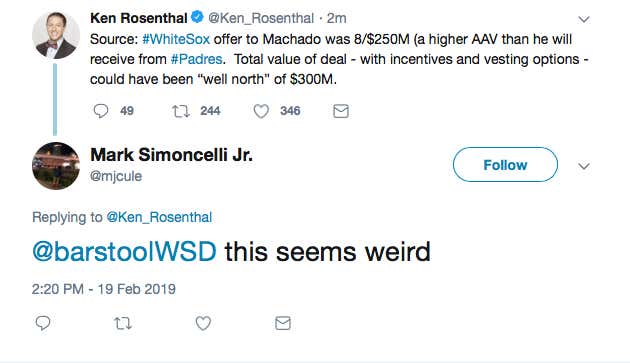 When news broke this morning that Machado signed the 10 year, $300MM deal with San Diego, I was obviously irate.  Beyond pissed.  I said that the only way that this was okay was if it was some crazy scheme because they were in on Harper.  That’s obviously not the case.

Well the ONLY other way this would sit semi-well with me is if the Sox were the high bidder but Machado opted to play elsewhere.  I mean, I’d get that.  The White Sox have been garbage for a decade and Machado is on a Hall of Fame path and wants a World Series.  San Diego, while rebuilding, offers that.  Their farm is loaded and they’re gonna be a juggernaut soon enough.

So Rosenthal’s tweet eases at least some SOME of my anger.  Machado took the number that started with a 3 and ran.  He took the guaranteed money.  He didn’t bet on himself or put himself in a position to potential make more than the $300MM he’ll make with San Diego.  And now for spite’s sake, we just have to hope he pulls a Miggy Cabrera, gains 300 pounds and becomes straight up dead money.  Regardless this is still just lipstick on a pig

I’m still fucking furious.  I’m still pissed they whiffed on a 26 year old future HoF’er.  But in the end, more than anything, I’m fucking embarrassed.  Embarrassed beyond belief.