This is so fucking badass that I can barely breathe. I need my inhaler. Stat.

“Chaps! Chaps! Tell us what is happening? Quote something from another news source and then give us your take!”

A huge statue of President Trump dressed as a Warhammer warrior with Twitter birds on his sword and the head of Vladimir Putin on his shoulder has been unveiled in Italy.

Covered in golden armour and wearing a gold leaf crown, the gigantic effigy brandished a huge claw hand with long talons and a Twitter-themed blade.

As it moved through the streets the animated Caesar-like figure turned from side-to-side and moved its arms, as people stood at its feet waving US flags.

On Trump’s armoured knees was a depiction of the Statue of Liberty’s head, plus an American eagle on one shoulder and the Russian president on the other.

The terrifying 65ft (20 meters) high statue was part of the Carnevale Di Viargeggio festival in the seaside town of Viareggio in Tuscany, where around 600,000 revellers witnesses the 40-tonne float parade through the streets.

The parade website refers to Trump as ‘God Emperor Trump’ and made several Warhammer references.

Created by sculptor Fabrizio Galli, he intended to mock the president and to also comment on Trump’s foreign policy.
According to Heavy he said told an Italian TV news station: ‘It’s a joke, but in fact he’s trying to destroy nations with the economy instead of nuclear missiles.

I dont care that this was intended to mock Trump. This is too complicated of a message for a parade. It falls on deaf ears for me. If you make a statue of me that’s 65 feet tall and I look like a warrior, I love it no matter what the hidden message is. You could have “Shit For Brains” written on my sword in Greek, Latin, and Italian and all that matters is that I have a huge sword and a parade dedicated to me. I’d be thrilled. In fact, the parade folks show all kinds of sides of President Trump. From the warrior pose with a sword to a “just goofin and having a good time” pose. 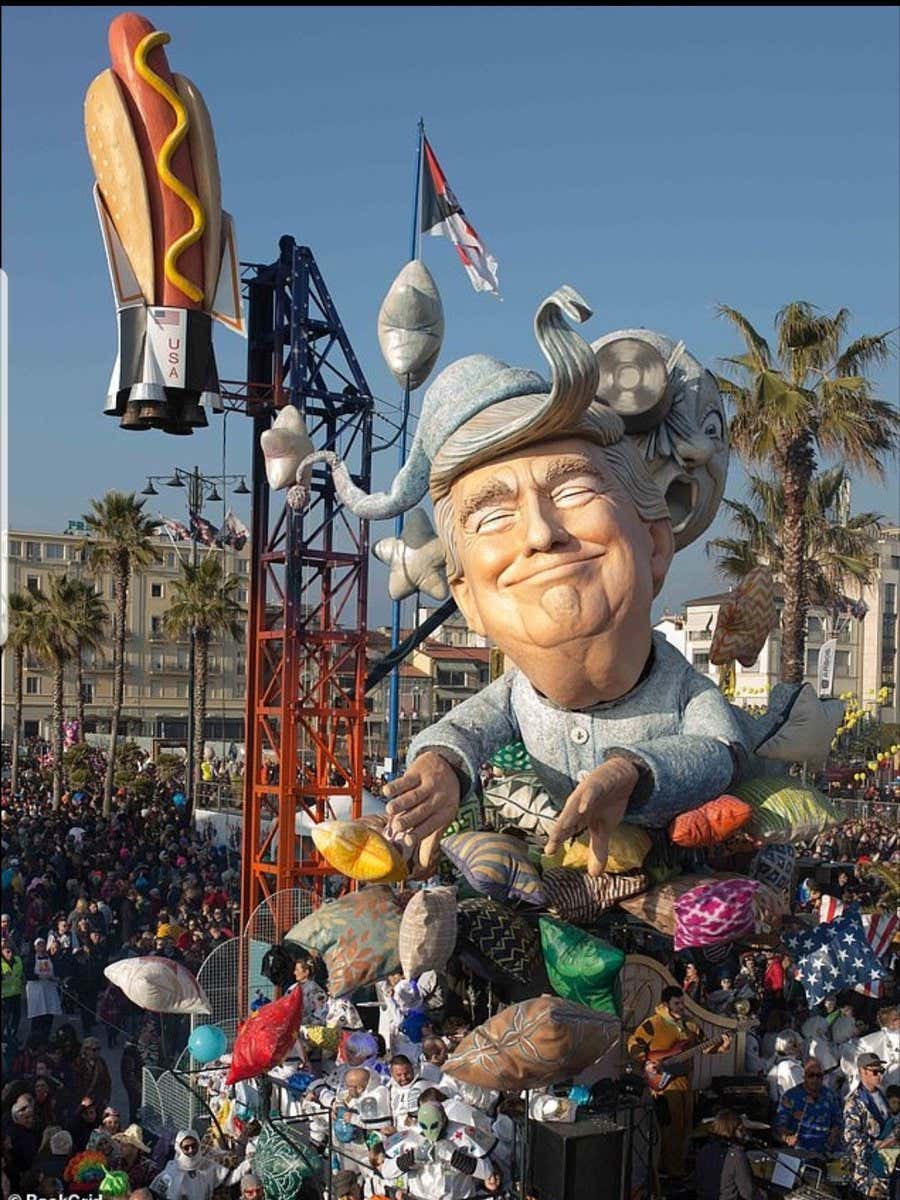 There’s no way to be mad about this parade. I mean, I guess you could take the “hes trying to destroy the global economy and using global trade like a nuclear weapon” thing as an insult, but if you do, you’re softer than baby shit. It’s a good parade with good statues that are incredibly well done.

Those statues are the best paper mache work I’ve ever seen. I’d show my tits at this parade. I wouldnt even need beads as an incentive because the statues are that good.