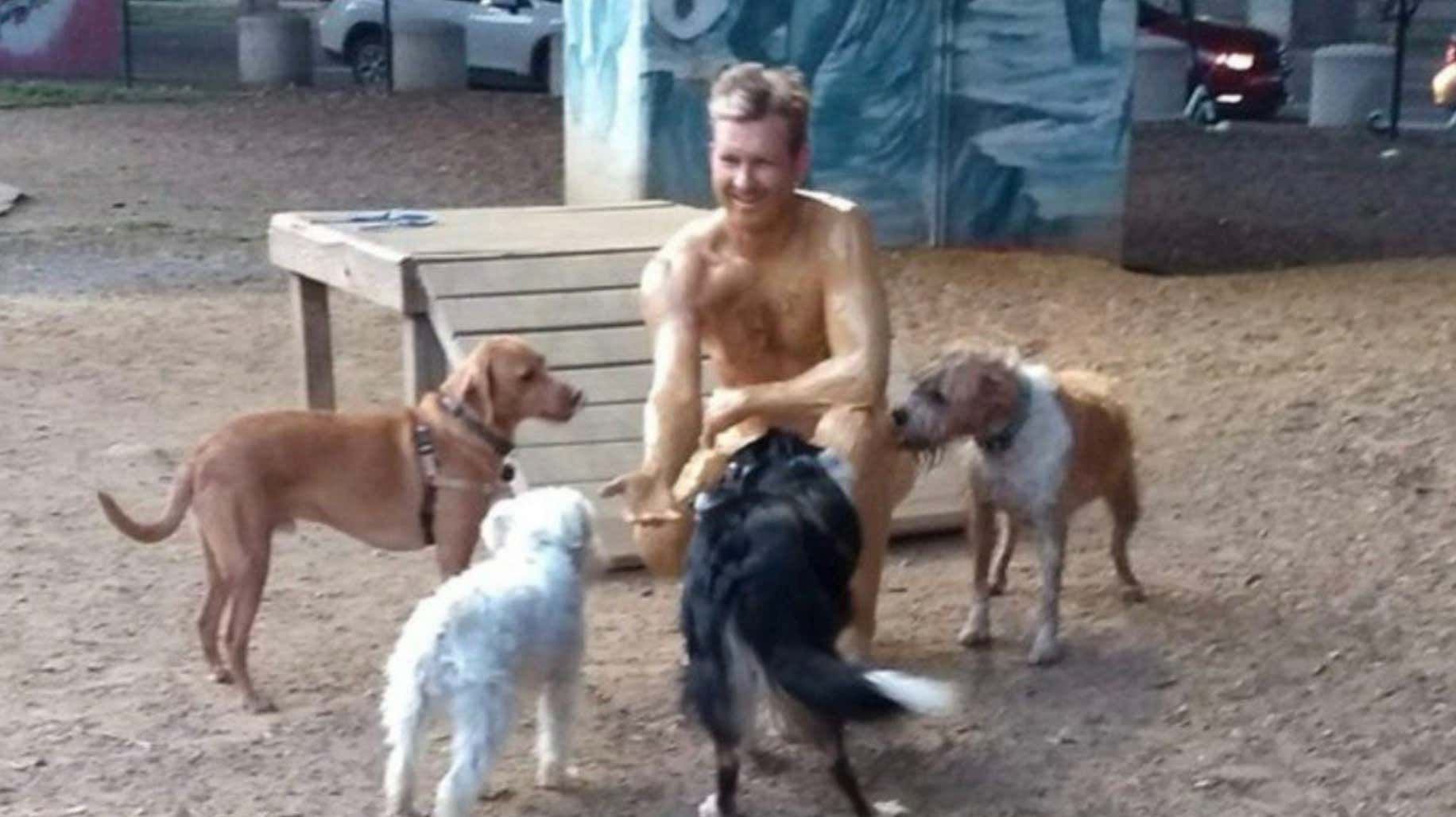 DALLAS — A hilarious photo of an Arlington man covered head-to-toe in peanut butter inside a Deep Ellum dog park is taking off online, primarily because the stunt was punishment for coming in dead last in his fantasy football league this year. For those who don’t obsess over draft plans, team schedules, or player stats, fantasy football is a predominantly online game where you’re the owner of a virtual professional football team. You draft offensive skill players, a defense, and how they do in actual NFL games translates to points in fantasy matchups online. Steven Shrout, 25, had never played fantasy football before this year. He decided to join a 12-team league with all of his friends from high school this year, who have been playing fantasy football together since 2009.

“It was my first year, and I didn’t do any kind of studying at first. I just kind of jumped in,” Shrout said. Shrout selected LeVeon Bell as his first pick, who was expected to play with the Pittsburgh Steelers this previous season, but ended up sitting out because he and the team couldn’t come to an agreement on a new contract. Bell has been a top player in fantasy in previous seasons, and many fantasy football owners felt the agony of his decision to sit out the season after wasting a pick on him in the first round of their drafts. However, Shrout doesn’t have too much room to talk because he auto-drafted after his first pick. “I ended up being dead last,” Shrout said.

Folks, we may have taken things too far this time. Fantasy football punishments are incredibly common and we cover them from time to time here on Barstool Sports dot com. They’re usually pretty mild. Sometimes the guy has to get an unfortunate tattoo on their ass or the guy has to stand next to a busy highway with a “I’m a loser sign” or the guy has to do 5 minutes of stand up at an open mic night. All of those are just good ol’ fashioned fun between close pals. The peanut butter/dog park punishment might be a bridge too far.

Then again, that’s just guys being dudes. That friend group will now be closer because of this. They’ll be like, “Remember that time Steve went to the dog park covered in peanut butter? There’s video!” So that’s a positive. Shoutout to the guy for going through with it. Most guys in that situation would probably be like, “Fuck that. I’m not doing it. I’ll just leave the league.” It takes a real man to pay up on a bet like that.

By the way, when the punishment for finishing last in the league is covering yourself in peanut butter and getting licked by random dogs at a public park, this can’t be how you approach it

“It was my first year, and I didn’t do any kind of studying at first. I just kind of jumped in,” Shrout said.

That CANNOT be your attitude. It just can’t be. That can be your attitude if you join a random league on Yahoo or ESPN just to see what all the fantasy football fuss is about. You need to do the opposite of that in a league where the punishment is potentially being added to the sex offender list. Study like it’s the most important test in your life because it is. Study so much football that you become the next Bill Belichick.